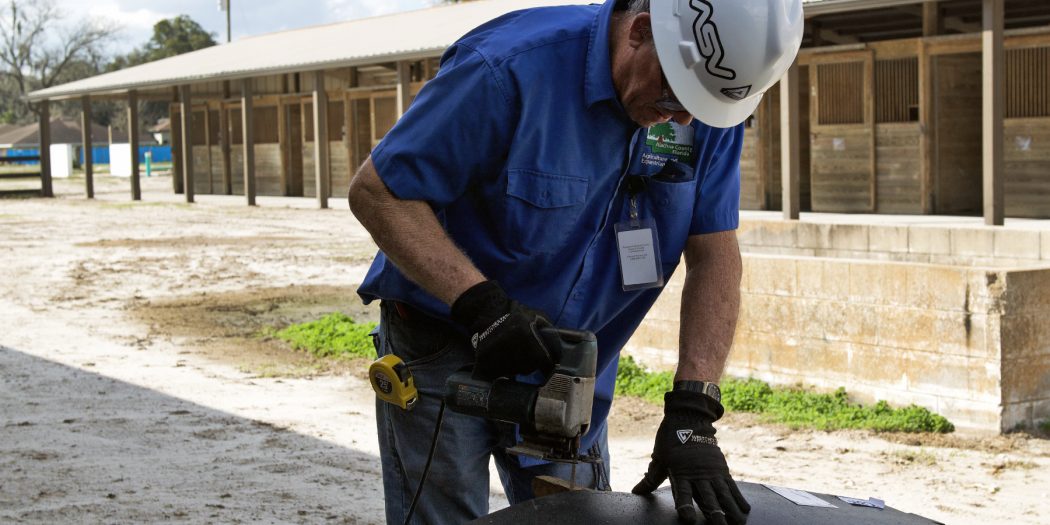 30 Years In The Making, Alachua County Fairgrounds Move From Gainesville To Newberry

Lee Ferguson has worked on the site of the new Alachua County Fairgrounds for 30 years, about as long as the county has been searching for its new location.

He’s tended to the property in Newberry since the 1990s, when his sister bought it. Since leaving his life as a windsurfer in the Florida Keys, Ferguson has seen the property go through changes in ownership and losses in acreage. Its once expansive cross-country course is home to new houses, and the remaining property is being transformed by the county.

Next month, the fairgrounds will complete their move from their previous location near the Gainesville Regional Airport to the Alachua County Agriculture and Equestrian Center, formerly known as the Canterbury Equestrian Showplace. COVID-related shipping delays pushed back the original completion date set for February, but the barn and arena portion of the site will be done in March to host the Alachua County Youth and Livestock Fair.

The county bought the property in 2019 for $3.8 million and invested $8 million. While the new center takes the place of the old fairgrounds, it will focus more on equestrian and livestock events than traditional fairs and carnivals.

Ferguson is excited to see people start coming to shows at the center again. Bulldozers and workers replaced horses and visitors when the land became an active construction site.

Over the years, he’s noticed Newberry residents who were initially reluctant about the new development warmed up to the idea once they realized it would remain primarily an equestrian center rather than a traditional fairground.

“It pretty much has the support of 99% of residents,” Ferguson said.

The old fairgrounds were leased by the U.S. Army Reserve for the next 50 years, successfully fulfilling the county’s goal of bringing more jobs to East Gainesville. The land will be home to an equipment concentration site. This is projected to bring nearly 400 jobs to the area, according to an economic impact analysis from the Food and Resource Economics Department at the University of Florida.

The relocation cost the fairgrounds in acreage; the old site was just over 100 acres while the new one is 37 acres. Its smaller size pushed away some events, such as the Hoggetowne Medieval Faire, but the county is relying on increased revenue from horse and livestock shows to make up the difference.

According to the Florida Department of Agriculture and Consumer Services, the horse industry, combined with tourism brought in by riders and spectators, generates an annual statewide economic impact of $11.7 billion. The Agriculture and Equestrian center partnered with Southeast Horse Shows to help with its mission of having an event 50 weeks out of the year.

“People are going to be very interested,” said Gina Peebles, Alachua County assistant county manager. “They loved Canterbury, they’ve been going there for 30 years, and now here it is shiny and new again.”

Peebles foresees the Newberry center, which the county has been searching for the last 30 to 40 years, being a location for qualifying events before riders and their horses move on to the new World Equestrian Center in Ocala.

The new fairgrounds will also benefit UF’s Institute of Food and Agricultural Sciences extension office. They moved across the county with the fairgrounds and now sits on five acres adjacent to the new site. UF/IFAS has extension offices in all 67 Florida counties and provides citizens with research and knowledge on agriculture and natural resources. Its Alachua County office has long been tied to the location of the fairgrounds, according to Cynthia Sanders, director of UF/IFAS Alachua County extension.

Sanders was involved in Future Farmers of America and youth fairs when she grew up here. She remembers the organization looking for a new location even then.

“Now that I see the dirt moving and the bricks going up, I believe it,” she said.

The new extension site will have added facilities, like an auditorium with a kitchen, campgrounds, a pole barn, which was transferred from the old fairgrounds, and access to the arena at the Agriculture and Equestrian Center. It will also have a 300–400-person auditorium that can be rented out for events.

There are 10 events scheduled March through May, according to the Alachua County Agriculture and Equestrian Center event page. The official ribbon-cutting ceremony will be in tangent with the Alachua County Youth and Livestock Fair on March 5, the first county event to be held at the center.

Ferguson has seen the center go through three owners and downsize from its original size of 200 acres. This opening will be a culmination of years of work.

“I’ve seen a lot of changes,” he said. “For a while it was a long hours, low pay kind of thing, but it didn’t matter. We were rolling.”

Julia is a reporter for WUFT News who can be reached by calling 352-392-6397 or emailing news@wuft.org.
Previous In Alachua County, Cuban Tree Frogs Proving To Be Troublesome Neighbors
Next Students Organize To Save McCarty Woods From UF’s Plans To Make It Smaller