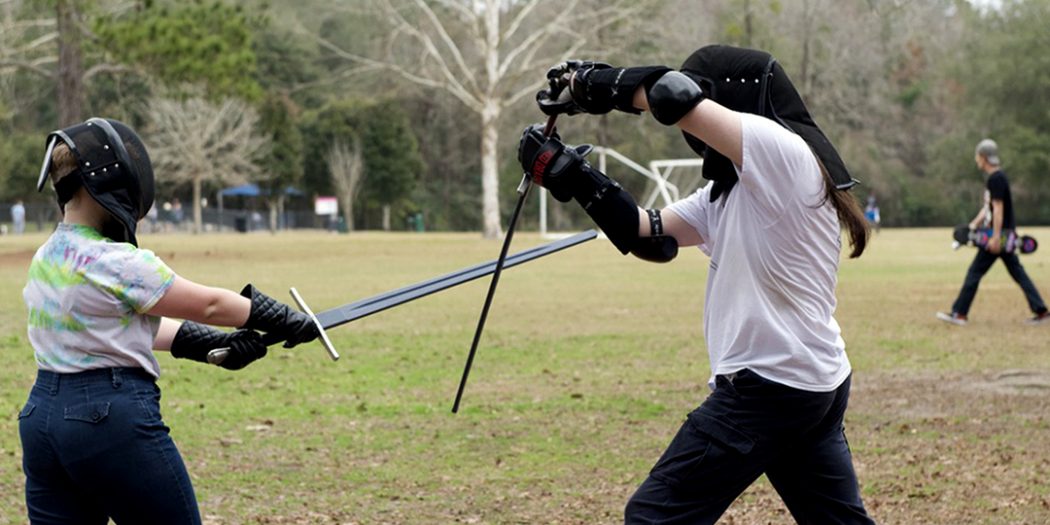 Christopher Preston, 19, founder of Gainesville HEMA, teaches Juliet Szadek, 16, how to fight with longswords at Possum Creek Park on Sunday, Jan. 24, 2021. Szadek started taking lessons after her doctors told her she had to join a sport to help with complex regional pain syndrome, a chronic illness she has. (Julia Coin/WUFT News)

Tiffany Lowe had to buy her own turkey legs this year. She’ll be eating them while watching the Hoggetowne Medieval Faire on her computer.

She won’t be the only one.

Hoggetowne at Home, the fair’s 35th production, will be an online collection this year.

“Due to the continuance of the plague, the King and Queen of Hoggetowne have sought out the talents of Merlin the Magician to transport the annual festival into a most magical realm called — the internet,” the website reads.

There will be five live interactive performances, 25 vendor stores and 25 pre-recorded videos, including demonstrations and kids craft, as of Friday. Live performances will be viewable on weekends, starting Saturday, Jan. 30 and ending Sunday, Feb. 7, while prerecorded acts and marketplace links will be available throughout the week.

The fair’s transition to the virtual realm isn’t solely due to the pandemic. When the Alachua County Fairgrounds were leased to the U.S. Army Reserve for the next 50 years in September, the grounds relocated to the Alachua County Agricultural and Equestrian Center in Newberry. The City of Gainesville opted out of renting the new location because it isn’t big enough to hold the Hoggetowne Medieval Faire, and is searching for next year’s location.

The fair normally generates a $40,000 to $60,000 profit, but last year it was lucky to break even, given the decision to have three weekends of festivities instead of the normal two, event coordinator Sunshine Andrei  said.

There won’t be any cost to attend the fair online. Eventeny, the platform the city spent $960 licensing, allows 100 people to watch each live performance at a time. Performers, many of whom have been out of jobs since the last fair in March, can set up their own virtual tip jars.

“The performer’s enthusiasm and energy almost makes me cry,” Andrei said. “Their light and their joy in having something to look forward to has reminded me of why we do what we do.”

For Lowe, 35, a long-time attendee and volunteer this year, the smoked turkey legs are only one part of the community she’s come to love. Knowing the losses medieval fairgoers took when the pandemic hit, she made a point to support vendors throughout the past year.

For others, the online fair gives a chance to promote their businesses and share their expertise. Christopher Preston, the 19-year-old founder of Gainesville Historical European Martial Arts, lost his training space when the pandemic hit. Now he teaches his students how to practice authentic sword fighting techniques under the pavilion at Possum Creek Park.

Preston submitted a pre-recorded video and will be holding a live Q&A session this Saturday. He said he hopes to shed light on the inaccuracies of fighting in historical fiction movies and shows.

The hope of bringing the medieval community together doesn’t stop at the Gainesville city limits. LANCE Orlando, which provided hecklers who poked fun at fairgoers’ clothing, company and overall looks in years past, will be contributing two new live performances: a satirical act, “How to Enjoy Medieval Fighting Without Problematic Loss of Limb” and an improv show, “Whose Faire is it Anyway?”

AJ Harrett, 33, co-founder of LANCE Orlando and training committee chair for the Orlando Renaissance Festival, said he thought the online platform was the best way to deliver shows and bring the community together right now.

“If they were still doing it in-person,” he said, “we might not have come.”

Harrett’s parents were part of the group that started the Hoggetowne Medieval Faire. When he heard of the possibility of not having a fair at all, he got scared. It would have been his second time missing the fair in his whole life, the first time being when he was a kid with chickenpox.

Harrett’s mom even performed while pregnant with him.

Charles Hale, 32, co-founder and president of LANCE Orlando, is also a Gainesville native who grew up going to the fair with his family. His older brother, Christopher Hale, who died in a rock-climbing accident in 2009, introduced him to the idea of performing.

“Being the younger brother,” Hale said, “I saw him perform and said, ‘I want to do that!’”

That’s what got Charles Hale into his career in theater.

Christopher Hale also introduced his mom to her passion for designing costumes. Melony “Gay” Hale , 60, a former performer, costume designer and now long-time attendee of the fair, had never made a bodice before her son’s friend asked for help.

Now she has a wardrobe of renaissance outfits to choose from: her favorite being the peacock queen and her back-ups being a wench ensemble for when it’s hot and a ball gown for when it’s cold.

She still hasn’t decided if she’ll join Lowe in dressing up for Hoggetowne at Home.

“The fair’s going to be different this year,” Gay Hale said, “but everything this year has been different.”

Julia is a reporter for WUFT News who can be reached by calling 352-392-6397 or emailing news@wuft.org.
Previous The Point, Jan. 29, 2021: Florida Governor’s Budget Proposal Looks More Upbeat Than You Might Have Thought It Would
Next Gainesville Law Enforcement Cracks Down On Bad Drivers Amid Pedestrian Deaths

For three weekends in January, Jim Greene smears his face in green paint, adopts medieval inflections and transforms into Emrys Fleet, the Rat Catcher at Hoggetowne Medieval Faire in Gainesville.