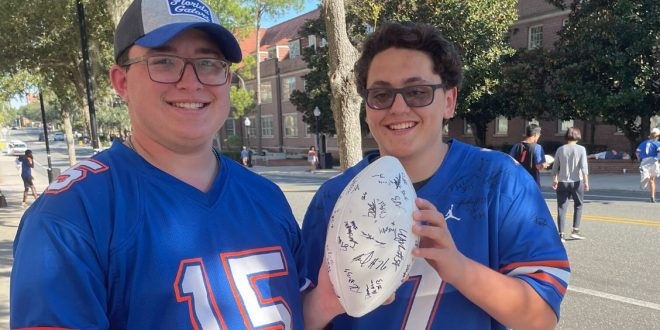 Alec Gluckman and Bennet Esquenazi with a signed football by players on the Florida football team prior to their first ever game-day experience in The Swamp.

Alec Gluckman, a normal 17-year-old high school student saw his life turn upside down one Fall Day in 2021. It was then that a serious sports injury and his first epilepsy seizure led to some surprising moments of pure joy – and life changing insight.

Indeed, the injury and illness seemed to ruin the high school wrestler’s life. A student at Wellington High School in West Palm Beach, Gluckman found his road to recovery included a Gator football game with one of his best friends that taught him what’s really important in life.

“It was one of the best experiences of my life,” Gluckman said. “A memory I will cherish forever.”

This dream was made possible by The Gator Good Foundation.

Its mission is to give a gameday experience to a passionate fan who otherwise might never experience The Swamp at a Saturday football game. Over the past four football seasons, Gator Good has brought kindness into the lives of individuals who have had challenging situations.

In September 2021, Gluckman suffered a torn ligament in his knee. Weeks later, he  suffered a seizure and was diagnosed with epilepsy. Gluckman would have to learn how to walk again and had to relearn how to complete everyday tasks. Thankfully, Gluckman had the Florida Gators and a great friend to help keep a smile on his face through recovery.

Little did he know, that Gator Good would be able to provide a smile for both Gluckman and his loyal friend.

Bennet Esquenazi, Gluckman’s best friend since age 4, was one of the first people by Gluckman’s side after his injury.

Since his injury, Esquenazi has sacrificed countless hours, nights and weekends to support Gluckman through his recovery.

After Gluckman’s experience, Esquenazi found Gator Good through a popular Twitter account associated In All Kinds of Weather, a media group that follows UF sports and is operated by Neil Shulman.

Shulman is a name many Gator fans have learned to love. He has accumulated more than 25,000 followers across Twitter, providing the Gator nation with up-to-date news and other information. His intent for being a part of Gator Good is to be able to spread the love that he has for the Gators and feels that fans deserve to experience a gameday in The Swamp.

“Knowing Alec and what he has been through I knew that he was the perfect guy to be put up for the honor,” Esquenazi said.

Gluckman credits Esquenazi for his love of the Gators.  He recalls the two were watching their first Gator game together during a sleepover.

“From then on, I always watched every Gator sporting event that was on, if they were playing, we were watching,” Gluckman said.

Leading up to the game, the friends were able to get the full experience of the homecoming matchup against the Missouri Tigers. Arriving in Gainesville on Oct. 7, Gator Good provided both Gluckman and Esquenazi with game tickets, hotel reservations and Gator swag bags.

The Friday night before the game, the two were able to walk around the Florida campus and take in all the prominent spots. Saturday morning leading up to the game, their journey continued with a special tailgate sponsored by the Gator Collective, Florida’s official NIL sponsor, that included current athletes from other sports along with Florida sports legends.

During the game, both were treated to Touchdown Terrace tickets in the box where they enjoyed the food and other refreshments during the game. The Gators were able to pull out a win, 24-17, despite some late heroics by Missouri. Since Gator Good began its campaign four years ago, the Gators have yet to lose a game their recipient attended.

UF quarterback Anthony Richardson spent time the next day with Gluckman and Esquenazi. Richardson provided some autographs and posed for photos with the boys.

“I’ve met tons of athletes before, but Anthony is one of the most grateful and humble guys you will ever meet and is thankful for all of his fans,” he said.

Esquenazi said Trevor Etienne Jr. also showed-up to sign his personal jersey. It will be a memory Esquenazi said he always would hold close.

Shulman, who also serves as digital content director of Gator Good, went to the Gator volleyball game later that night with Gluckman and Esquenazi.

“Wow, college football is way better than NFL football,” Gluckman said. “The Swamp was such an amazing environment for people who love sports, truly the best sporting event I’ve ever been to.”

Esquenazi said this game was a once in a lifetime experience.

“Just to be around people with a common interest and passion for football, especially the Gators, was an incredible experience,” he said.

Memories for two best friends who have been through so much together, now have a life-long memory they will always be able to share with each other. ”This entire weekend will be something I cherish for the rest of my life,” Esquenazi said.

Kyle is a reporter for WUFT News who can be reached by calling 352-392-6397 or emailing news@wuft.org.
Previous The Point, Nov. 11, 2022: Tropical Storm Nicole causes major damage to A1A sections, other parts of Florida’s east coast
Next National Merit Semifinalists begin breathing a sigh of relief