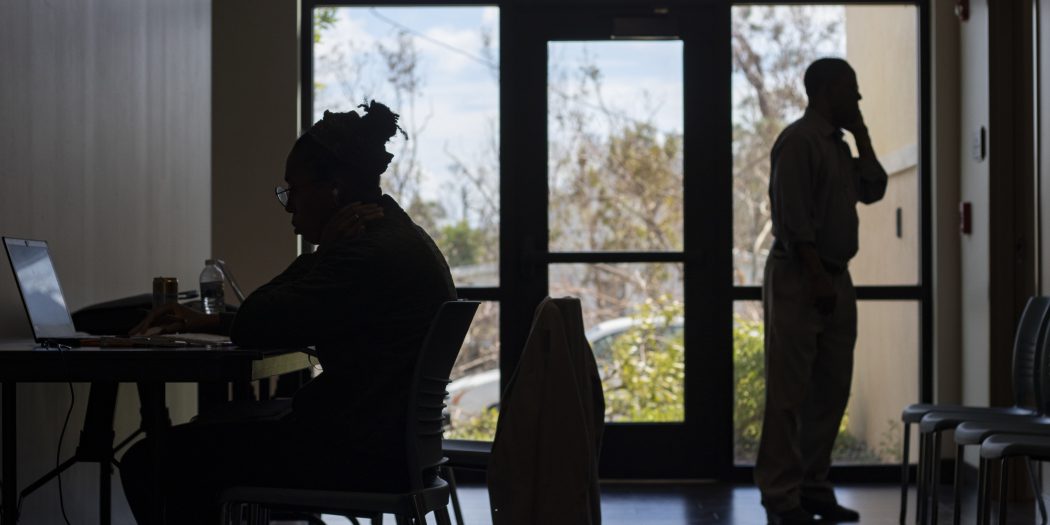 People use the WiFi to work and make calls at the Punta Gorda Charlotte Library on Tuesday. (Lauren Witte/Fresh Take Florida)

Living without internet: Library is hot spot after hurricane disconnected parts of Florida

PUNTA GORDA, Fla. – At the library, cars are bumper to bumper beside debris from fallen trees stacked over five feet. Vehicles temporarily sit in the fire lane while library staff try to track down their owners. Locals are outside with laptops, camping chairs and patio tables from home. The entry hallway is lined with eight folding tables and 20 metal chairs for overflow seating.

The crowd isn’t here only for the books. Many have come to get back online.

The Punta Gorda Charlotte Library is one of the few places in the area that offers public access to the internet, and it is the only library open in Charlotte County. Residents find themselves temporarily limited to a disconnected era before smartphones, Wi-Fi, streaming video and 5G.

Efforts to restore connectivity turned tragic last week when a private helicopter crashed Saturday night in South Fort Myers. Its crew of four had been working to set up communications systems, and a fire department official on board from Useppa Island suffered grievous injuries.

Watch a video report below from Lauren Witte of Fresh Take Florida.

After Hurricane Ian, some neighborhoods in southwest Florida have spent weeks without the internet. Those who need it are setting up camp at the Punta Gorda library. The latest update from the Federal Communications Commission said roughly 125,000 people remain without cable or wired phone service, even as cellular service was coming back online.

Wearing a Seattle Mariners hat and shirt, Mousa Hamad, 40, of Punta Gorda sat in the teen section of the library with his 5-year-old daughter, Malaea, and his neighbor’s son, who he was watching while his neighbor talked over Zoom in her car.

Hamad, who works a remote technology job, traded in his 40-inch Dell curved monitor and standing desk for a four-person table in the middle of the crowded library, which is seeing triple the amount of daily visitors compared to before the hurricane.

He has packed lunches and snacks for himself and the two children, who sit nearby with their tablets.

Hamad’s job relies mostly on tools like email and online collaboration tools like Slack and requires 13 to 15 hours of video conferences each week. At the library, he was able to book one of the two private study rooms for two hours at a time to sit on conference calls without disturbing others.

Hamad planned to return to the library daily until his internet was restored at home. He must leave by 3 p.m. to head to Harbor Social, a local restaurant with cable television and internet service.

“It’s the Mariners first time in the playoff in 20 years, and I can’t miss it,” Hamad said.

At a small booth in the library’s corner, Lisa Dunbar of Port Charlotte answered the phone.

“My boss called me, and I whispered, and he asked me if I was sleeping,” she said.

Dunbar’s pharmaceutical job where she has worked since 2005 recently went fully remote, allowing her to relocate from northern Illinois to Florida.

After surviving their first hurricane, Dunbar and her family are navigating disconnected lives. Her two children, ages 16 and 18, drive regularly to the Cuban food market closest to their house where they get service from Verizon. Sitting in the parking lot, they can download videos from Netflix to watch later at home.

Like many in the area, Dunbar’s internet provider is Xfinity, which told customers it may be able to restore service in parts of Punta Gorda later this week.

One of the few people in the building with internet service at home, librarian supervisor Jonathan Westbrook worked with his staff to accommodate and assist visitors.

The library normally operates with 11 daily staff members but increased the number to 19, with some staff coming from the other closed libraries in the county. The temporary hours are 10 a.m. to 6 p.m., seven days a week until further notice. Westbrook said new visitors were coming for a variety of reasons.

“We’ve got doctors who are doing tele-visits right now, we’ve got people coming in for proctored tests, people filling out forms, people on the back porch working from home and doing video calls,” Westbrook said. “But as for what they’re exactly doing, we don’t ask.”

Book and movie rentals are up since the hurricane, although Westbrook said that won’t persist once service was restored. About 250 new patrons signed up for library cards over six days – about the same amount the library usually sees in a whole month.

Five minutes before he had to join a conference call, accountant Mark Adkins, 63, was at a wooden table by the library entrance with his Yeti coffee cup. He splits his time between Punta Gorda and Ohio, and heard about the library’s internet access from his wife on the Nextdoor app. Adkins didn’t expect service to be restored at his home until the weekend.

Damage from the hurricane has temporarily closed the MVP Realty offices in Port Charlotte, so Alexander Scotland, 20, was in the library for the first time in the 13 years he has been living in the area. He was eager to get back into his office.

“I feel like when I’m working from home, I get distracted too easily,” he said.

“This is not necessarily our standard daily work,” said Westbrook, the library supervisor. “But this is your local library rising to the occasion for what needs to be done, and we are proud to be here to do that.”

This story was produced by Fresh Take Florida, a news service of the University of Florida College of Journalism and Communications. The reporter can be reached at grace.banahan@freshtakeflorida.com. You can donate to support our students here.

Grace is a reporter for WUFT News who can be reached by calling 352-392-6397 or emailing news@wuft.org.
Previous Rough times ahead: Hurricane Ian batters SW Florida economy
Next Watch live: House Jan. 6 committee holds public hearings on its investigation