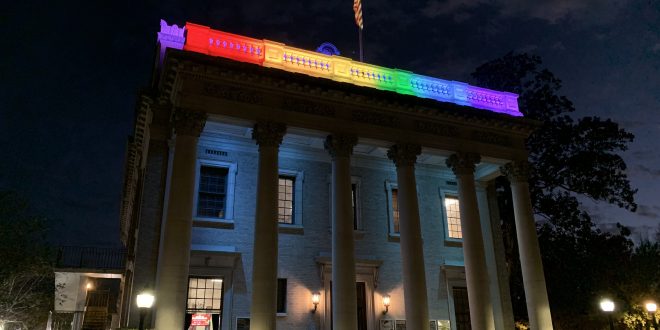 The Hippodrome Theatre in downtown Gainesville was illuminated in honor of Transgender Day of Remembrance. (Sarah Sepe/WUFT News)

Dozens of people gathered in Bo Diddley Plaza on Saturday to celebrate the transgender lives lost to violence in the past year for Transgender Day of Remembrance.

“I am of divided mind and emotion tonight,” Gainesville Mayor Lauren Poe said while giving the Transgender Day of Remembrance proclamation. “I feel so grateful and so honored to be with all of you … in a city that honors and affirms and celebrates the trans community. But I am also so incredibly heartbroken that once again we will stand here and listen to the names of the slain, out of hatred; meaning our task is not yet complete.”

The event is held annually on Nov. 20 to raise awareness of the violence transgender people endure. It also is a way for the community to recognize and mourn the people who fell victim to anti-transgender violent crimes.

Over 400 names from around the world were read during the ceremony, however, the number of people who lost their lives may be even greater, according to Kane Barr, the Pride Community Center’s secretary.

“There are still so many names that are going unreported because they were misgendered or misidentified,” Barr said. “Or, just not identified at all… I definitely have to take a lot of breaks when I go through those names, [because] it’s really bad.”

With the progression of technology, acts of anti-transgender violence are no longer happening in the shadows. Twitter, Facebook, TikTok and other social media websites now give the chance for these peoples’ stories to be seen and heard.

“Nowadays, media is so quick. Nowadays, people are able to record,” Barr said. “We’re able to see more. So, it seems like it’s getting worse and worse each year, but I think the reality is [that] we’re able to find people easier, and more quickly than we ever did before.”

Vice President of the Pride Community Center, James Brown, said his attendance was to bring visibility to the trans community. Brown, 36, made his debut at the event this year and hopes to be the type of support the LGBTQ+ needs.

“(The day) represents a really important portion of our community,” Brown said. “I think it’s really important for events like these to happen to bring visibility to the communities that are affected by a lot of things that we don’t necessarily see.”

Volunteers from organizations like UF Pride Student Union and TranQuility got on stage and read each name, each life, one-by-one. Candles adorned the stage and were held in clenched hands by attendees. The people whose lives were taken out of hatred were celebrated and loved.

Sarah is a reporter for WUFT News who can be reached by calling 352-392-6397 or emailing news@wuft.org.
Previous Former NYPD officers in Florida heralded by DeSantis include surprises
Next Former inmate marries imprisoned partner in unauthorized wedding in Florida