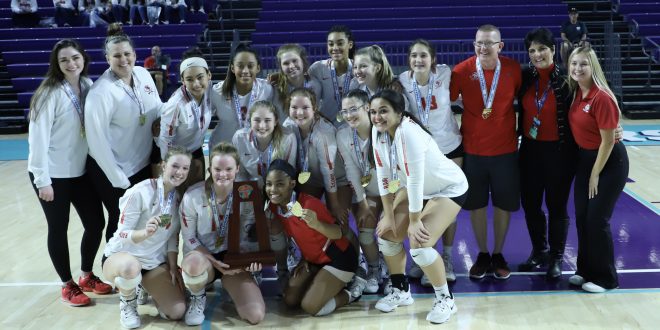 FORT MYERS — As the Santa Fe High School girls volleyball team finished its third set against Calvary Christian Academy, the team could celebrate a school first: it had won the Florida High School Athletic Association Class 4A State Championship. Students, parents and faculty roared with cheer as the players formed a dogpile at center court.

The Raiders won in straight sets over Calvary, ending their season on a 16-game winning streak. The team did not drop a set in the last 10 games it played.

Head Coach Eric Marshall, who started with the team in 2018, took the Raiders to the state championship in his first two years when they lost in straight sets to Merritt Island High School and Orlando’s Lakeland Preparatory School, respectively.

“Second place just isn’t the team that everyone talks about,” Marshall said.

Santa Fe started its match with the Eagles slowly. The Raiders fell behind 6-3, pushing Marshall to call a timeout.

Not much changed when the teams returned. Calvary Christian would extend its lead to 12-6.

Santa Fe came storming back to tie the game at 16-16. The Raiders would score the next nine points to secure the ever important first set.

Marshall said his team looked anxious to start the game.

“I don’t want to say nerves that they were scared,” he said. “I thought they were anxious. I didn’t think we were scared of the moment at all.”

Once the girls settled in, they didn’t look back. Santa Fe would lead the entire second set and win it 25-17.

The third set was like the second as the Raiders closed out the Eagles 25-14.

For the girls on the Santa Fe team, this moment was about legacy.

But not this year. This year was different. The Raiders returned to the state championship determined to win it all.

This championship is the first for Santa Fe since 1994, when the football team won it all. Senior Rylie Tam pointed out in the post-game press conference how big this win is for the community.

“We had almost 60 kids get on a bus for five hours to sit there through it all,” she said. She noted that her peers could often be found cheering them on at home games this year… “[For] the people who have supported us all year, this is just as important to them as it was to us, and they were just as big of a part of it.”

Now that the season is over, the players and coaches can relax. As for being remembered, they don’t have to worry about that anymore.

A new banner will soon hang in Santa Fe’s gymnasium.