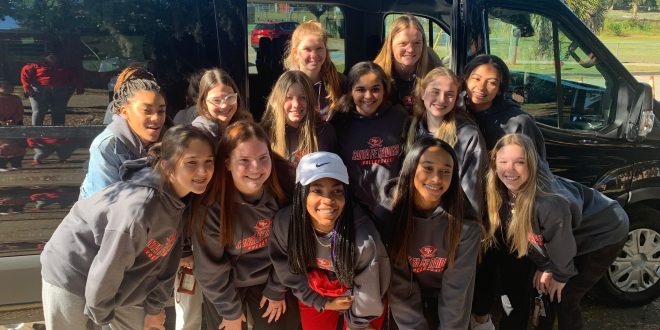 Players pose in front of the team bus before their trip to Fort Myers. (Trey Johnson/WUFT News)

The Santa Fe High School girls volleyball team is headed to the state championship yet again.

In 2018 and 2019, the team finished as the state runner-up. In 2020, the Raiders lost to the eventual 4A champion Bishop Kenny in the regional finals.  This year, the team beat Bishop Kenny on its way to the state championship game. The Raiders will play Fort Lauderdale’s Calvary Christian Academy on Wednesday at 4 p.m. in Fort Myers.

The school held a send-off ceremony around 10:30 a.m. Tuesday, when students and faculty gathered in the hallways to cheer on the girls as they walked by. The team then gathered in the front of the school where they were met by the band, cheerleaders and family members.

Student Body President Ansley Piazza, 18, said that the success of the volleyball team has helped build a strong community on campus.

On Wednesday morning, a “pep” bus will take 56 students and 4 adults to the Suncoast Credit Union Arena to cheer on their school. Students had to pay $25 for a spot on the bus, which filled up quickly and currently has a waiting list. The pep bus is planning to leave by 9:30 a.m.

Piazza said she is excited to make the trip this year.

“This is my first time getting to travel on the pep bus,” she said.

As for the players, senior Rylie Tam said that this year feels different.

“My freshman and sophomore years we were kind of like the underdog,” Tam said. “We were viewing it as we have to manufacture points. This year we’re viewing it as we’re the best team in the state. They have to change to us.”

With a record of 28-3, the Raiders are ranked No. 2 in the state and No. 4 in the nation. The team’s only losses this year were against Tampa’s Berkley Preparatory School and Ponte Vedra High School, ranked No. 3 and No. 1 in the state respectively.

The Raiders are riding a 15-game winning streak to the championship game. The team has not lost since Sept. 25, and it has not dropped a set in nine games.

Wednesday, the Raiders are up against the Calvary Christian Academy Eagles, which has a record of 26-4 and is ranked No. 18 in the state.

While the game is yet to be played, Tam acknowledged that tomorrow’s game is a little bittersweet. It will be her last one as a Raider.

“This program has been my family for the past 4 years,” she said. “If we’re able to win it tomorrow, it will be the best way to end it.”

Parents are excited as well. Chad Marquis, senior Faith Marquis’ father, said the family is proud of Faith’s and the team’s hard work.

“This is everything she’s worked for,” he said. “I think this is the year.”