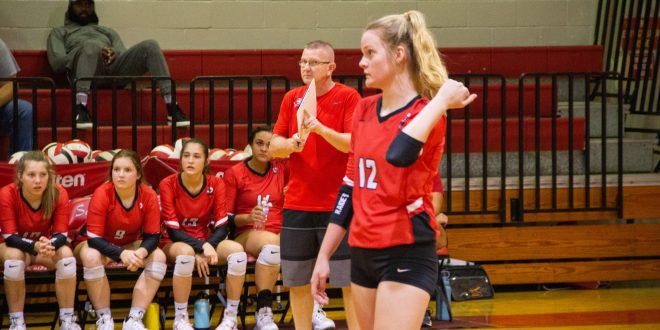 The Lady Raiders have won four straight district championships and reached the final four three times in the past four years.

The Raiders are ranked No. 3 in the state, and No. 7 in the nation.

When Marshall was a student at Santa Fe, volleyball was not one of his interests because the school didn’t offer boys’ volleyball.

“I didn’t touch a volleyball until I walked in [and] accidentally signed up for a volleyball class when I was a freshman,” he said.

Marshall credits coach Loretta Shane for teaching him how to play the game. Shane took the Lady Raiders to the state championship in 1976, where they lost to Tampa’s Academy of the Holy Names. Many of the players on the team were in Marshall’s volleyball class.

“They were all very good,” Marshall said. “You either learned how to play really fast or you were quite embarrassed.”

Marshall and the other three boys in the class fell in love with the sport. The quartet formed an outdoor team and competed in local tournaments in the area.

Marshall went on to serve in the Marine Corps after graduating high school.

“[Coaching] high school wasn’t really on my radar,” Marshall said. “I got talked into coaching as an assistant at P.K. Yonge for two years.”

Marshall’s oldest daughter, Ashton, was playing volleyball at Santa Fe at the time. Marshall said that was a “thing” at home. He had coached his daughter’s travel team since she was about 12 years old. To make matters worse, Marshall helped P.K. Yonge win back-to-back state titles in 2014 and 2015.

After Francisco Peon left Santa Fe to coach at Gainesville High School in 2017, former head coach Michelle Faulk knew that Marshall would be the right guy for the job.

“Eric had been a part of Santa Fe for many years,” Faulk said. “He went to school here. [He] was very involved with the program… He also had children that went through our program.”

Faulk coached Ashton when she was a freshman and sophomore at Santa Fe. 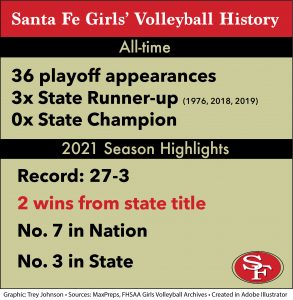 While the coaches have changed over the years, Faulk said that maintaining a high standard has been key.

“The biggest thing is trying to keep that continuity,” she said.

Now in his fourth year on the job at Santa Fe, Marshall has done just that. He’s won four district titles on top of making deep state playoff runs.

It helps that he has been coaching many of his players since they were about 10, as Marshall coaches club volleyball for the Gainesville Juniors.

Senior Rylie Tam, 17, said that Marshall is the only coach she’s ever played for.

“He’s kind of like another dad to me,” said Tam, who has been playing volleyball since she was 8 years old.

In 2020, the Raiders lost to Jacksonville’s Bishop Kenny, a team they beat twice that year. Multiple members of the team, including Marshall, agreed that the Raiders got a bit ahead of themselves.

This year, the team is locked in. Marshall said that he doesn’t have to remind his team of past defeats. With a record of 27-3, the Raiders have only lost to the top two teams in the state: Ponte Vedra High School and Tampa’s Berkley Preparatory School.

Of the 27 wins this year, 25 have come in straight sets. In the first game of the regular season, the Raiders were pushed to a fifth set with Ocala’s Forest High School. Tam said that game was a wake-up call.

“We realized we can’t screw around,” she said. “This is our best shot.”

Nothing seems to be standing in the Raiders’ way, as they work to win two more games to capture that elusive state championship trophy.

Their next game will be Saturday at 2 p.m. against Tampa’s Academy of the Holy Names.

“We’ve been here before,” Marshall said. “This is the kids’ third time getting this far. We’ve laid an egg both times at the championship. So, if we can win one more, we’re not laying an egg this year. We may not win the whole thing, but we’re going to go in there with way more confidence than we have.”

The state championship game is scheduled for Nov. 17 at 4 p.m.