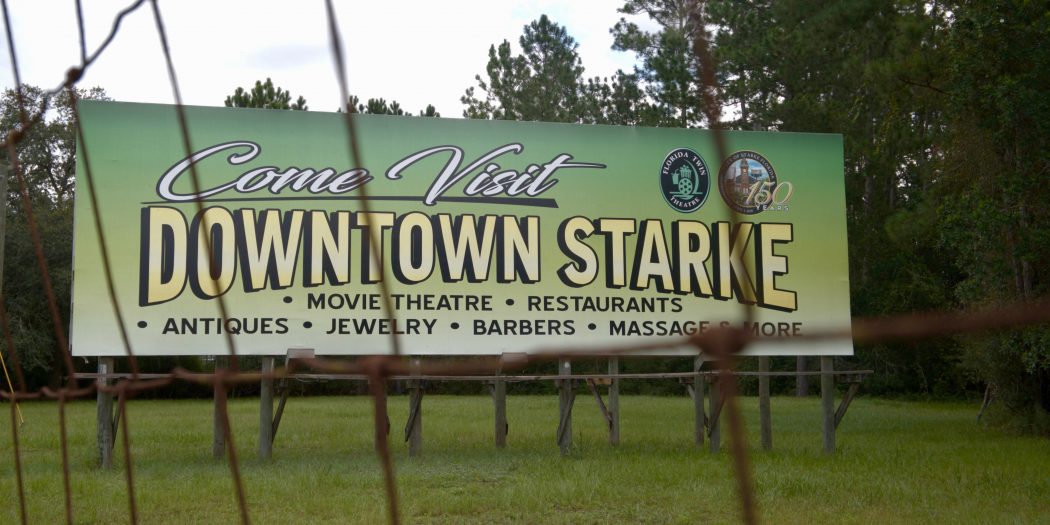 The city of Starke installed billboards to promote local business after a bypass diverted much of the pass-through traffic from along U.S. Route 301 downtown. (Hannah Phillips/WUFT News)

Starke Businesses Survived The Route 301 Bypass. Will They Survive The Pandemic, Too?

A 5,000-square-foot consignment shop sits just off of U.S. Route 301 in Starke. Merchandise spills out of its doors and into the parking lot. “We’re open!” signs line the road.

Few motorists stop, though. Not because of what businesses along the four-lane roadway had feared – the opening of a highway bypass – but what they did not: the coronavirus pandemic.

Five years ago, Rebecca Griffis opened Second Hand Treasures there to take advantage of the heavy traffic. Each fall, Florida Gators fans congested the road to and from Gainesville.

“We could literally walk up to the cars and talk to people because they were stopped for so long in front of our business,” said Griffis, 45, a local resident.

That ended a year ago, when the Florida Department of Transportation opened the 7.3-mile truck route that bypasses Route 301 through Starke. By January, the bypass had diverted 65% of overall traffic from the city of about 5,500 residents, said FDOT spokesperson Troy Roberts.

“U.S. 301 was basically just bombarded with trucks,” Roberts said. “We felt all along that the truck route would strengthen the town of Starke.”

Business owners were less certain before, but their minds seemed to have been eased.

“We had so many people delighted,” said Pam Whittle, president of the North Florida Regional Chamber of Commerce. “Our locals were like, ‘Yay! We’re rid of the truck traffic.’ They could traverse through town real quick.”

The influx of Starke residents willing to drive along Route 301 proved beneficial for businesses. None have closed as a result of the bypass, Whittle said. Local sales tax revenue even increased the first few months after it opened.

“Things were looking pretty good,” she said. “Then this mess hit.”

Residents crossed the road freely for about six months, until the pandemic pushed them back inside, Whittle said. According to FDOT, traffic there hasn’t returned to normal since.

It has made some businesses’ newfound reliance on local shoppers particularly tricky.

Take the Florida Twin Theatre. In its prime, the two-screen community staple served as many as 1,400 people over a weekend. The number is closer to 80 because of COVID-19, according to the theater’s owner, Justin Sparks, 34, of Starke. He knew change was coming in February, when a showing of the faith-based film “I Still Believe” drew significantly fewer people than normal.

Sparks’ father, Lee Sparks, had owned the theater until his death in January. That thrust Sparks into a role he had not planned on assuming for many years, let alone just before a pandemic.

Neither Bradford County nor Starke officials have passed a mask mandate, so it’s up to business owners whether to enforce face coverings for their employees or customers. Doing so would mean ostracizing a large and outspoken segment of the community, Sparks said, many of whom believe mask mandates are an affront to personal liberties.

Instead, Sparks closed the theater to the public. Would his father have kept it open? Sparks thinks so. Community members who constantly push him to reopen agree. Yet the likelihood that it staying closed would prevent even one person from falling ill is worth it, Sparks said. He doesn’t want anyone else to lose a loved one. For now, the Twin remains open for private booking only.

Nathan Menke, 37, of Waldo, hasn’t had to close 301 Tattoo & Piercing. The year has brought only minor changes to his business, he said, for example, only one customer inside at a time.

With the bypass, however, leaving work to get lunch is no longer a nightmare. It used to be maddening. He might spend an hour behind the wheel just to drive four blocks to McDonald’s.

“I have witnessed people have total meltdowns,” the tattoo artist said. “Just pull off the side of the road, park, get out and have manic episodes, small breakdowns.”

Maddening, but good for business, Menke said. He would watch from his parlor for the moment that cars slowed to a halt. An employee would hurtle through the shop doors and gyrate by the curb with a yellow sign, yelling at idling drivers to come get a tattoo. Some did, Menke said.

Cars rarely idle on Route 301 anymore, but the difference to 301 Tattoo is negligible. If anything, Menke said, the pandemic has made up for any profit lost to the bypass. Recent customers told him that their tattoo purchases came in lieu of canceled summer vacations.

“Things are closed,” he said. “What else are they gonna do?”

Harry Patel, 37, of Starke, wishes they’d stop in Fun Point. His arcade, the Dollar Tree and Popeyes on Route 301, is filled with blinking lights and game consoles. There’s a bar in the back for adults to enjoy while their children exhaust themselves on whack-a-mole. Families flocked to Fun Point when it opened in January. The bypass made it more accessible to local residents.

“You have to go all the way to Ocala or Jacksonville for Chuck E. Cheese,” he said.

The summer months should have been his busiest with children out of school, Patel said. Business stopped, though, as soon as the pandemic began. He installed hand sanitizers for children to use between games, and his employees watch like hawks to make sure that they do.

Yet his business is making 70% of the revenue it was in January.

“People are scared now – I don’t blame them,” Patel said. “Once this is all over, they might just come out and play some games.”

Another Starke resident, Anne Gowens, 49, is doing what she can to help. Since the pandemic began, she’s gone out of her way to shop locally so owners like Patel might stay in business.

“I see the local restaurants more, and I’ve gotten to know who they are and who their families are,” she said. “They’re my community. I’d much rather spend my money with them.”

Gowens said the bypass prompted her and her husband Keith Gowens to finally visit shops like Powell’s Dairy Freeze, an ice cream shop on Route 301. It’s been there for years, but the traffic kept them away. They come often for chocolate dipped cones and peanut butter shakes.

Back at Florida Twin Theatre, Sparks stood on a ladder in front of its marquee. Down came letters spelling “Is it 2021 yet?” He replaced them with a promise: “I’ll be back.”

Hannah is a reporter for WUFT News who can be reached by calling 352-392-6397 or emailing news@wuft.org.
Previous Uber Tightens Mask Requirements
Next Oct. 8, 2020: Morning News In 90