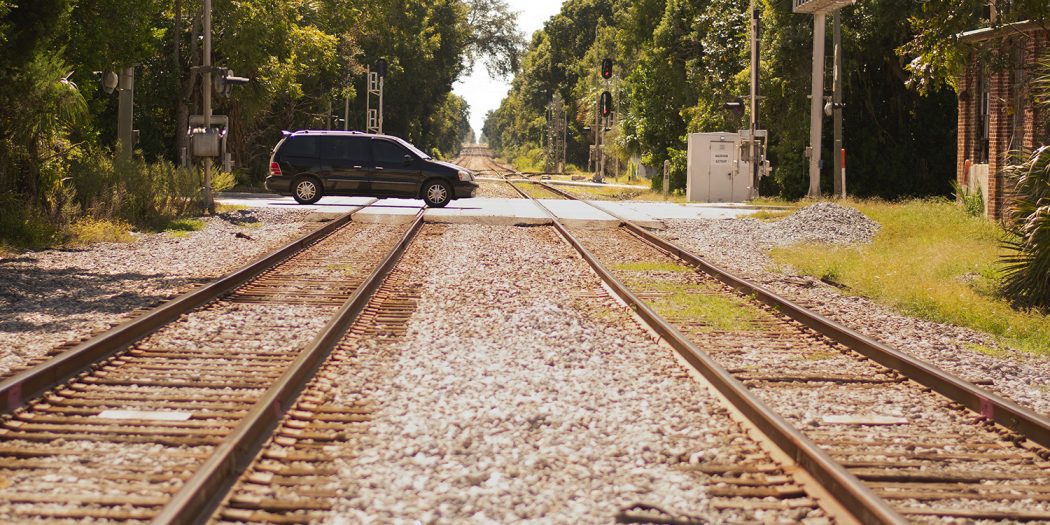 The railroad tracks used to hum with the sound of tires, especially on a Saturday when the Florida Gators played in Gainesville. (Gabriella Paul/WUFT News)

From Pam Whittle’s office in downtown Starke, traffic used to sound like a stampede.

A University of Florida home game was a boon for the town of nearly 6,000 people. On Saturdays, a mass of orange-and-blue football fans drove through Starke on their near 30-mile trek south toward the Swamp.

On this fall afternoon, the Gators are taking on the Tennessee Volunteers. It’s an SEC clash that is a huge game by all accounts. But on this September day, an eerie quiet has befallen Starke. The once steady stream of cars through downtown has vanished.

With much fanfare, a bypass for Highway 301 opened the week before. It was a 7.3-mile detour that offered drivers an alternative route through Starke.

It had been a long time coming; the first proposal for the project was made back in 1993. For decades now, the town has heard rumors of a bypass. Every time, the talk led to rising tension and the state inevitably earmarked the project for another year.

But back in 2016, the Florida Department of Transportation found its teeth, and construction on the bypass finally began.

In the years since, town folks grew accustomed to the fluorescent vests and hard hats of employees from Superior Construction and Anderson Columbia Co. They also had ample time to wonder whether four lanes of fresh highway might divide their town in more ways than one.

Green road signs announce, “Alt. 301 Truck Route,” near both entrances of the bypass. The $178 million project was aimed to alleviate semi-trucks from bottlenecking in the middle of Starke. Now the truckers were gone but so were all the other motorists.

Some residents called it the truck route. Others preferred to call it what they felt it really was: a detour. But no matter the name, the roar of traffic through downtown was gone.

For some, it was a good thing. They reclaimed freedom to drive on their main road through town. Others saw it as a death knell. They wondered how small businesses might fare with a dramatic drop in foot traffic.

Lee Sparks, owner of the historic Florida Twin Theatre, is the ring leader of the “Bradford Liar’s Club,” a few businessmen in town who meet on weekdays to eat lunch, bet on sports and talk business. Recently the talk had focused squarely on the bypass.

Sparks, 65, dreads ticket sales will drop along with disposable income. Across the street, at The Office Shop, owner Rusty Greek hopes the town will naturally reset. Frank Sheffield, who owns a pest control service, thinks the bypass is a mixed bag of perks and punches.

Starke — an eclectic jumble of mom-and-pop shops, chain restaurants and a Walmart Supercenter — had come to depend on its game day traffic.  The loose pocketbooks of passersby helped keep businesses in the black.

Sandra Norman, 80, predicted the death of her fruit stand many months out. It was as though she were watching a loved one slowly die of cancer.

Norman’s Fruit Stand sits on a gravel driveway, where the southbound entrance to the bypass now severs Morgan Road. It’s been there since 1989 and Norman looked forward to Saturdays when she could make a handsome profit.

Norman wears a faded yellow tank top that shows her tanned shoulders from three decades of working the stand. In the past, Gator fans stuck in traffic sprinted from their cars for a jar of homemade jelly or a pack of farm-fresh peanuts. But not on this day.

Norman estimates the bypass has already cost her $400,000 since 2017, when construction was underway.

She plans to board up the stall and sell the yellowing lot behind her to Circle K or Wawa to open a truck stop. She consoles herself knowing that her legacy will live on at Norman’s Country Market, the stand’s downtown location, run by her son and daughter-in-law.

“I wouldn’t be optimistic if I was in Starke,” she says, leaning over her brother’s homemade jellies.

Some of Starke’s leaders had warned of the sting to businesses. Like Pam Whittle, head of the regional chamber of commerce, and Bradford County Sheriff Gordon Smith. And a whole bunch of small business owners who knew that once the bypass opened, they would have to adapt or die.

“I wish I had that crystal ball,” Whittle says, when asked about Starke’s economic future.

All the chamber can do now is encourage business owners to develop an online presence. An accurate GPS pin or raving Yelp review could keep afloat a small business like Dink’s Place, the town’s ice cream parlor.

In the meantime, the chamber promises two new billboards coming soon that will command motorists to, “Stop in Starke.”

Driving through town, Highway 301 dissolves into Walnut Street and again into Temple Avenue before depositing on the other side. The town is a collection of historic buildings and white churches on every corner. Off the main road, an abandoned shack is swallowed in vines beneath a sign, “Chinese and Japanese To Go, Grand Open.” Nearby, a Confederate flag dangles from a radio antenna on the roof of a local convenience store. Not so surprising given that one legend has it the town was named after slaveholder Thomas Starke, who owned its original 40 acres and the men, women and children who toiled it.

These days, Starke sits surrounded by Camp Blanding, where the Florida Army National Guard trains, and the Florida State Prison, where the condemned are sent to their deaths via lethal injections.

Just beyond the town’s railroad crossing sign is the Downtown Grille, the sports bar where the “Bradford Liar’s Club” meets. Sheriff Gordon Smith is an honorary member.

Smith was not enthusiastic about the bypass. He didn’t want to see his friends’ businesses suffer because of the road. Yet, hours before its official opening, Smith orchestrated a makeshift parade to rally the town. Change, he surmised, was now inevitable and he wanted people to put their quarrels aside.

The new road, he said, “pitted neighbors against neighbors, family against family.”

For the parade, he recruited over 40 antique North Florida car owners to be the first to scuff up the new asphalt still smooth like black ice.  They collected at the mouth of the bypass’ northbound entrance. Smith led the parade of cars in a neighbor’s notoriously rusted ’38 “Rat Rod” Pontiac, painted to imitate a patrol car. This is what the Daytona 500 might have looked like a century ago.

Lawrence Budget’s forearm dangled from the driver’s window of his ‘58 Chevrolet Apache, a crisp copper color like that of a freshly minted penny. Budget, 62, prides himself on his expertise of an antique engine, but more so, his affinity for change, something he believes the town of Starke should learn from him. Before retiring, Budget traveled the world as a civil engineer in the Army. If there was one thing that he learned: change is good. And he thinks the bypass might bring just that.

Frank Patterson, 68, scoffed. He disagreed with his friend. He owns a sign business in town, Showcase Signs. His prediction? The bypass is a tombstone for Starke’s small businesses.

The predictions of pessimists seem a far cry from a booth at Grannie’s Country Cookin’. On game day morning, Pam “Grannie” Synder rings up tickets at the cash register. Homemade jewelry swivels on display next to her. Behind the bar, a crowded shelf is adorned with three stuffed roosters and a row of vintage Pepsi-Cola bottles.

Half past 10 in the morning, grandma’s wrinkled face, etched on a metal billboard, smiles down on a full parking lot. Like most mornings, Snyder has been in since 2:30 a.m. to fluff the grits, cook the gravy, start the coffee and brew the tea for the 5 a.m. regulars.

Her unequivocal answer to how the bypass is affecting business: “It’s not.”

As far as she’s concerned, the bypass is a win-win and nobody is losing.

For years, during construction, she worried the new road might mean fewer folks coming in for “Cali’s Crazy Breakfast Stacker,” a smorgasbord hash and egg dish named after her granddaughter and topped with gravy. But now, Synder realizes the opposite is true. Without passersby clogging up Starke’s dozen-stoplight town, residents are free to travel to the other side without fear of brutal traffic.

The locals, after all, are her most valued customers. Not even a bypass could dent their game day traditions, let alone their loyalty to her.

That’s the same sentiment at Call Street Cafe, where Katelyn Donovan, and her husband, Ryan, lick the remnants of Mahi Reubens off their fingers.

“I wish the bypass came 20 years ago,” she says. Her husband nods, but she does all the talking.

Saturday mornings at the country-style kitchen are a weekly tradition for the young couple. But, for the first time, Donovan, a high school teacher who lives near one of the bypass interchanges, recalls the drive to brunch as bearable. The bypass, she says, has made her small town small again.

By 2020, the new route is predicted to divert more than 25,000 vehicles each day; possibly even more when the Gators kick off in Gainesville. It’s clear the 301 bypass is both a welcome truck route and an unwanted detour; a blessing and disaster in the form of 7.3 miles of asphalt. It’s too soon yet to see how the newly inaugurated road will affect Starke. There’s no turning back. No crystal balls. All that the people of Starke can do now is wait and see.

Gabriella Paul is a reporter for WUFT. She can be reached at gabbympaul@ufl.edu.
Previous Oct. 28, 2019: Morning News In 90
Next The Point, Oct. 29, 2019: Study Says It’s True, Hurricanes Can Cause Earthquakes