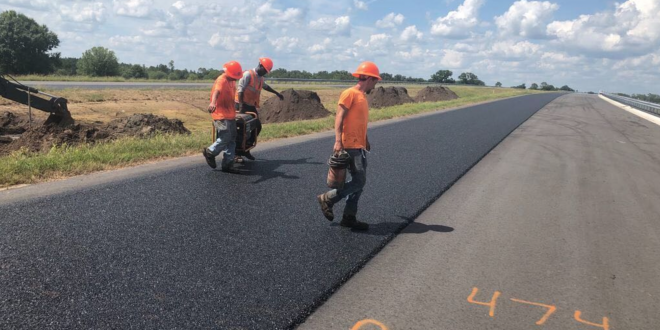 A trio of construction workers for Anderson Columbia Co., Inc. assist in the completion of the north side of the new truck route. (Joseph Hastings/WUFT News)

$178M Truck Route Will Attempt To Relieve Congestion In Starke. It’s Likely To Change The City One Way Or Another

Barbara Ricks says driving along U.S. Route 301 in Starke can be the worst.

“It’s gotten really, really bad,” Ricks, 75, of Bradford County, said the other day at the Bealls Outlet in the Deerfoot Village shopping center in the city’s business district.

“At lunchtime, it’s really congested,” she said of Route 301, which is traveled daily by many motorists and semi-tractor trailer drivers passing through.

“Especially on Friday evening – oh my goodness,” Ricks continued. Once, she noted, “It took me 25 minutes to get from Walmart to my house, which is less than five miles.”

The route is also heavily used in the fall by Florida Gators football fans heading to Gainesville from parts near or north of Jacksonville.

To address the longstanding traffic problems in Starke, the Florida Department of Transportation is building a 7.3 mile, four-lane bypass between County Roads 227 and 233 on the city’s west side. At the north end is Norman’s Roadside Market; the south access point is near the Walmart.

Overpasses will be constructed over County Roads 100A and 299 as well as the CSX Railroad. Interchanges will provide access to State Roads 16 and 100.

The total project is expected to cost taxpayers $178 million. Two companies – Anderson Columbia and Superior Construction – have been hired to build it.

FDOT began construction in August 2016 and expects the bypass to have an immediate impact.

Troy Roberts, a spokesman for FDOT, said the roadway should be finished by early fall.

Roberts said FDOT prefers to not call it a bypass, realizing the concerns of business owners worried about the potential loss of revenue.

City Manager Bob Milner said there was concern about economic development in Starke even before the bypass came along. Milner envisions less revenue for some businesses when it opens.

“I don’t think there’s any doubt – we just don’t know how much yet – some of the eating establishments and fueling and other places that tend to have a high percentage of their customer traffic from pass-through traffic will definitely be negatively impacted,” he said.

“We’re going to take a hit,” Mortimer said. “We’re just optimistic that it’s not going to be as bad as it could be.”

Sandra Norman, owner of Norman’s Roadside Market since 1989, said construction has caused a big drop in retail sales, particularly when southbound traffic was closed for a year and a half.

Even after the route opens, she said her business will have a hard time recovering.

“It won’t ever be the same,” Norman said.

Roberts said FDOT has been in touch with Norman about helping her business adjust.

“We obviously sympathize with any business owner that sees a loss in business or decrease in business,” he said.

David Ochoa, manager at the Laredo Mexican Restaurant in Starke, is also concerned about potential consequences of the bypass.

“It’s going to affect our community, because with more traffic coming in they can see things, and we can stop them and sell something to them,” Ochoa said.

Ty Bolden, owner of The Sheik franchise in front of the Walmart, is counting on more business once the bypass opens.

“I do believe that once it’s complete, it will help us, just because you’ll have a lot of people coming off the bypass, and then the construction zone will be cleared,” Bolden said.

One resident, Ed Hudson, a former Anderson Columbia employee, said a loss of revenue for businesses could lead to another unintended consequence: higher prices for residents on goods.

“They’re not going to be able to continue at the prices that they’re selling these things at,” Hudson said, “because they’re going to be losing a whole bunch of traffic coming through that was helping these businesses. We’re the ones that’s going to have to pay for that.”

Roberts said he does not expect the new roadway will harm businesses.

“To be honest with you, most of the trucks that are traveling through Starke – there’s a pretty good chance that they’re not stopping,” he said. “We’re not looking to remove traditional vehicular traffic.”

Roberts added: “We truly feel that this is a positive project and a benefit to the town of Starke that’s going to relieve congestion and hopefully help their businesses continue to grow.”

When going through Route 301 in Starke, Davis, 57, said the congestion adds time to his trip.

“Sometimes, you’d sit in a red light for two or three times before getting through it,” he said.

Davis said he understands concerns about possible local ramifications, but believes the bypass will help people in his industry.

Regular drivers traveling in and through Starke, such as local resident Thawana McDougald, a compliance audit specialist who works in Gainesville, said the route is a good thing.

“I really do believe that in the future, when they get through, it is going to get better,” McDougald said.