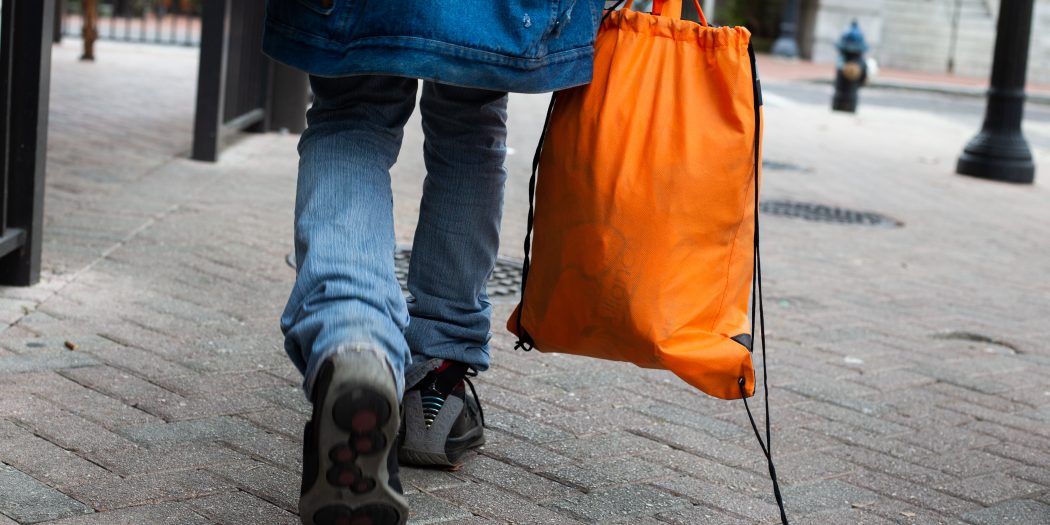 Tiffny Burton was one of 23 homeless volunteers Wednesday for the annual point-in-time count of the sheltered and unsheltered homeless population in Alachua County. Starting at 7 a.m., Burton along with 40 other volunteers collected their tablets and paper surveys and walked around Gainesville to assess the needs of displaced people.

“Are you currently displaced or experiencing homelessness?”

“Where did you sleep last night?”

These, along with other questions, Burton reads to each homeless person she approaches. Some answer the questions; some ignore her. Each person experiencing homelessness gets handed a drawstring bag with items that have been donated to the Continuum of Care (COC) with snacks, toothpaste, soaps, and socks.

The U.S. Department of Housing and Urban Development requires each COC to conduct a count at least every other year. This is the second year that United Way of North Central Florida, the lead agency of the COC has run the count in Alachua, Bradford, Gilchrist, Levy and Putnam counties.

“We are basically doing a needs assessment of every person experiencing homelessness that is willing to talk to us,” said Mona Gil de Gibaja, president and CEO of United Way of North Central Florida.

Last year the census counted 804 homeless people in across the five counties, about 6% higher than the year before. Gil de Gibaja attributes this increase to getting better at finding homeless people with the help from local law enforcement, fire and rescue and the homeless volunteers that are familiar with the areas.

One woman living outside of GRACE Marketplace in Dignity Village expressed concern about homeless people in the woods and more rural areas being missed by surveyors. Mark Watson, a street advocate with 3 Rivers Legal Services, directed volunteers and felt confident that if people are out, then they would be counted.

A whiteboard at Holy Trinity Episcopal Church in downtown Gainesville, the basecamp for the count, had 15 sheets of paper pinned on it, representing 15 different canvassing zones. Watson sends volunteers back to locations throughout the day depending on that area’s resources.

“I-75 is busy around rush hour, and we send people back to Grace around meal times,” Watson said.

It’s important to get answers to these questions so money can be properly allocated to the immediate needs of Alachua County’s displaced people.

The reality is that many homeless people are experiencing it by choice.

“If they want housing, then we need to be able to provide it and what kind,” Gil de Gibaja said. Permanent supportive housing provides subsidized housing and support services indefinitely, while rapid rehousing is a temporary crutch for those who need up to 2 years of support before becoming self-sufficient. It is impossible to know how much money is needed for each type of housing without asking the people directly affected.

Of the five counties that the census covers, Alachua County has the highest homeless count. Jeff Gruver, director of shelter services at GRACE Marketplace, explained that the surrounding counties are less populated and more rural. Many of the services for the homeless are in Alachua, such as at GRACE or St. Francis House.

With the Dignity Village homeless campground closing and people being relocated from the tents outside of GRACE, Gruver hopes to see a decrease in unsheltered homelessness. In fact, since Oct. 1, 53 people from Dignity Village have been housed.

The outreach team from GRACE surveys those inside GRACE and outside in surrounding areas as part of the census. Over the past five years, GRACE has decreased unsheltered homelessness in Alachua County by 44%.

Gruver has about 99 people on a list of those moving from Dignity Village onto GRACE grounds, but he expects 20% more. The immediate call to action is permanent housing and money for it.

Burton signed up to volunteer to make some extra money, but she enjoyed the opportunity to meet other people living on the street. “Nobody can help you if you don’t tell them what you need,” she said. If she is still in this situation next January, she will volunteer again.

Previous Florida House, Senate Differ On Teacher Pay Hikes
Next The Point, Jan. 30, 2020: ‘Where Did You Sleep Last Night?’ Volunteers Try To Get Accurate Count Of Area’s Homeless