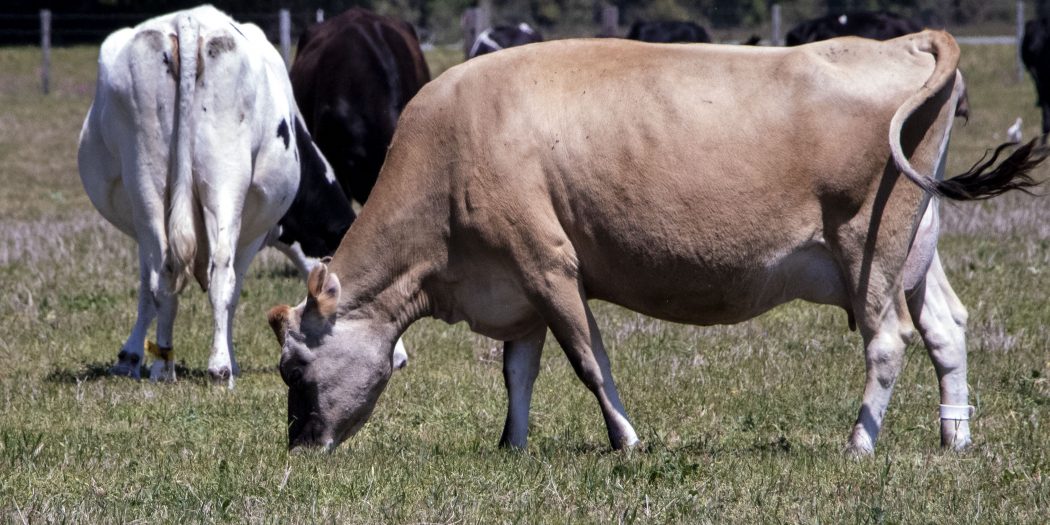 A mixed herd of Jersey and Holstein cows graze at Musgrave Dairies in Mayo, FL on Wednesday, March 27, 2019. (photo by Ashley Lazarski)

Cathy Musgrave remembers fondly the network of farming neighbors who used to populate Lafayette County. Now, as nearby dairy farms close one by one, Musgrave said her biggest disappointment is that she can no longer afford to help others as much as she once could. In fact, she said, she is lucky to have stayed afloat as long as she has.

Just a few years ago, there were 20-30 dairy farms scattered across Lafayette County. Today, after steep declines in milk consumption have left many of these farms bankrupt, only about six remain.

Musgrave is one of these remaining dairy farmers. She and her husband, Arlie, have owned Musgrave Dairies, Inc., since 2004, watching year by year as her neighbors have gone out of business. However, this issue is not limited just to Lafayette County or even the state of Florida; it is a nationwide problem.

Experts often cite the decline in milk consumption, which has dropped by 25 percent to approximately 18 gallons annually per person since 2015, according to the American Farm Bureau, as the main factor to blame for the closing of dairy farms.

Musgrave said, however, that dairy farmers’ economic struggles have been going on for much longer. For her farm, the addition of corn ethanol to gasoline was the first of many changes that negatively impacted farmers.

“Before that, corn was pretty much limited to human consumption and cattle food, but after the government began subsidizing it for ethanol, more corn had to be produced. It completely changed the landscape of agriculture, and it became more expensive to put it in the feed,” she said.

Higher feed prices were the first of many expenses that made farming less profitable for both large and small dairies. Musgrave Dairies has recently turned to grass feeding, planting a variety of plants to ensure that their cows receive necessary nutrients while avoiding the use of store-bought grain as much as possible, Musgrave said.

At any given time, the Musgraves own about 50 cows, a relatively small herd compared to some of their corporate competitors.

“Farms of every size have struggled,” Musgrave said. “Now it’s turned into 10,000 cow dairies that are being run by corporations that don’t even have their main farmer on hand actually being a farmer.”

Many of Musgrave’s neighbors had been living and working there for generations before the banks began foreclosing on their farms.

Chris Vann, a Lafayette County agricultural agent for the University of Florida Institute of Food and Agricultural Sciences, also has witnessed the decline of the local dairy farms and has his own ideas of how to help them.

“Milk prices are low and have been for a while, and the prices are either stagnant or declining,” said Vann. “There are other alternatives for people to use, and people are just not drinking as much milk.”

In Lafayette County, smaller dairies are more common than larger, potentially more efficient ones. When pitted against these big dairies, small ones often have a difficult time competing with their combined lower production costs and lower milk prices, which are ultimately more attractive to consumers, Vann said.

“It’s kind of like a lot of the other industries,” said Vann. “It’s either get big or get out.”

Yet both large and small farms play an important role in the local and national economy. These dairies are an important part of the economy, and they produced more than $100 million worth of agricultural sales in the last few years, said Vann.

Federal milk loss payments help farmers with risk management in the form of small amounts of money when they are in financial distress. However, the amount of money they receive often correlates with the tariffs the government has implemented for imports. Depending on how high the tariffs are, farmers might receive less funding.

Regardless, these payments act as a form of Band-Aid, giving some protection so that farms have time to heal, said Vann.

“It helps, but it’s not going to make you whole again,” said Vann. “We need to sell more milk or get the big glut off the market, and right now that’s not happening.”

Other industries, such as the tobacco industry in Lafayette County, have received government compensation for other reasons. The tobacco buyout of 2004 combatted an excess of tobacco in the market, and farmers received financial benefits if they cut back on their production. This overproduction of tobacco parallels the current surplus of milk, and for this reason, some farmers are attempting to make a similar deal with the Florida state government, Vann said.

Izabella Toledo, an extension agent for UF IFAS, said some dairy farmers have been trying to obtain money from the government as the tobacco farmers before them did. However, she is skeptical about how much government assistance would actually help them, even if they were able to obtain it.

Instead, Toledo said, the government should focus on building close relationships with Canada, Mexico, and China in the hope that this might encourage more trade between countries and a reduction in tariffs, she said.

Dairy exports have increased annually, with more than 5% of milk production exported in 2017, according to the U.S. Dairy Export Council, which is a part of the U.S. Bureau of the Census.

“I truly believe that this is not going to change too much until we can export more of the milk,” Toledo said. “The global prices of milk are rising, and that is going to have an impact here, too.

However, like Musgrave and Vann, Toledo agreed that the loss of dairy farms has become an issue of national importance because of milk overproduction and low demand. To put it simply, there is already too much milk in the market, so the price is going down, too.

At the farms, the cows are more productive than they have been in the past. Therefore, many farms require fewer cows to produce the same amount of milk. Smaller herd populations mean lower costs to care for them, which could help save farmers money in the long run, Toledo said.

“Lowering cow numbers may even bring milk production to a position where they will not have as much unused milk,” said Toledo.

This is especially important for medium and small dairies that are struggling to sustain themselves as big dairies continue to grow.

Until governmental action is taken, farmers will struggle to keep their businesses afloat and to stimulate public interest in their plight. Unfortunately, Musgrave said, most people don’t seem to care if dairy farms fail.

“You can get a gallon of milk just as easily from a corporation as from a family farmer,” said Musgrave. “People don’t talk about it because it doesn’t affect them.”