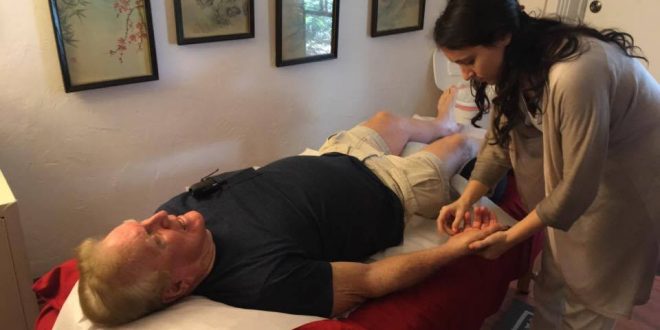 Fred Blakey receives an acupuncture treatment from Julia Leavy for his eye disease at Leavy's mom's private acupuncture practice in "Acupuncture Alley" in Gainesville. This and other alternative medicines have taken a strong foothold in the city, and practitioners say they offer hope among a variety of medical situations, including those involving opioids, which claim more than 140 American lives daily. (Alyssa Ramos/WUFT News)

The sight in his left eye is now almost gone. But the 78-year-old retired University of Florida history professor has found one treatment that he believes could at least sustain the eyesight he has left: acupuncture.

Acupuncture is an alternative (often called “Eastern”) medicine that involves inserting extremely thin needles into various parts of the body to treat physical and mental illnesses.

It has gained a strong foothold in Gainesville, with two schools devoted to it and a number of acupuncturists in “Acupuncture Alley,” a mile-long stretch along and around Northwest Sixth Street where at least 13 acupuncture practices have set up shop.

“I’m hoping that the acupuncture will prevent [the macular degeneration from worsening], and it will stabilize me,” said Blakey, who receives his treatments at acupuncturist Kathleen Leavy’s private practice. “And so far, it has.”

At Leavy’s practice, Blakey is treated with acupuncture protocol, which works to solve eye problems by inserting the needles into the palms and feet. It’s meant to decrease the blood flow to the eyes, which then slows the process of macular degeneration — though Blakey does recognize the treatment isn’t a cure.

“Being able to maintain what you have is a victory, instead [of] it getting progressively worse,” he said.

Leavy’s daughter, Julia, has been performing the treatment on Blakey for the past three years.

“What I’d like to see is acupuncture as a valid form of medicine,” Kathleen Leavy said. “It’s actually received by more people in the world than Western medicine. It always has been. It’s bigger, it’s deeper, and it’s much more ancient.

“Formulas that were used thousands of years ago are still being used today. It’s very effective.” 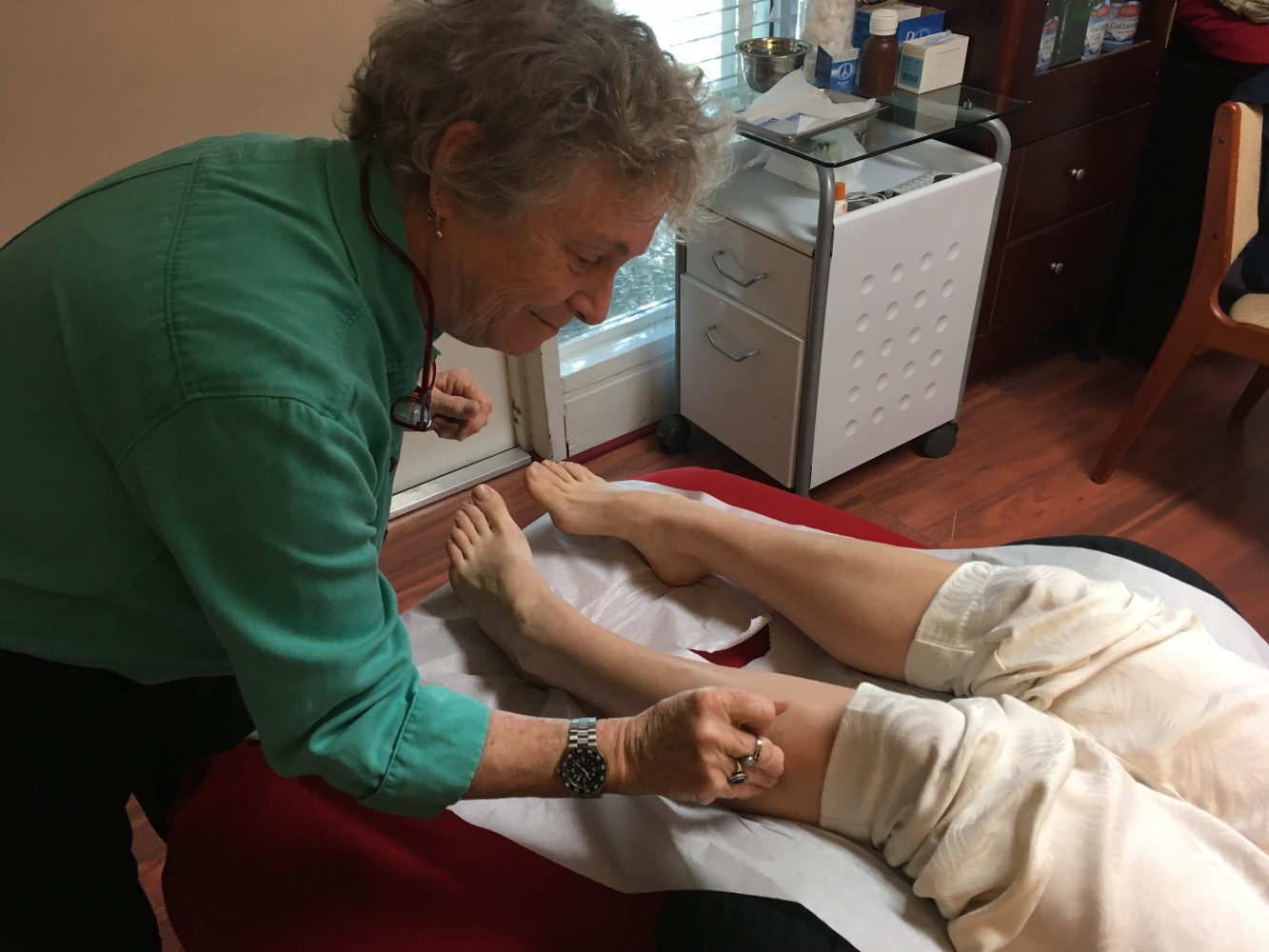 Half of U.S. adults have reported using alternative medicines instead of or as a complementary treatment to Western medicine, according to survey results published earlier this year from the Pew Research Center.

The FDA has proposed new guidelines that suggest that doctors treat chronic pain with the combination of Western and alternative medicines. Pain management is an area of particular interest because it often defaults instead to opioids, which are estimated to claim more than 140 lives of Americans daily.

Opioids are “a very powerful source,” Kathleen Leavy said, “and it takes a lot of will to want to quit and take that on.”

Along with pain, acupuncture is being used to treat a wide array of other issues, including insomnia and anxiety.

But Kristen Madrid isn’t convinced. The University of Florida doctoral student in counseling psychology researches pseudoscience, and she said many people opt for alternative medicine because they assume more natural routes are inherently better.

Madrid said belief in these medicines is rooted in confirmation bias, or the tendency to search for evidence that confirms one’s preexisting thoughts.

“A lot of people operate under this naturalistic fallacy: If [alternative medicine] seems natural — no big chemical words — it’s good for me,” she said. “And it’s entirely false.”

Madrid considers it unethical for practitioners to offer pro-alternative medicine claims because they aren’t backed up by the researched science.

“There’s so many smoke and mirrors,” she said, noting that any felt changes could be from the placebo effect. “There’s grand claims. It gives people false hope.”

On such skepticism, Kathleen Leavy said that, from her own experiences, acupuncture has indeed proven to be effective. Along with humans, she treats pets, and they’ve shown improvement despite not being able to react to a placebo.

Leavy has been practicing acupuncture and with Chinese herbs for 24 years, and she recently began experimenting with herbs to treat symptoms of opioid withdrawal.

“It’s ancient. It’s not alternative, and it’s not new,” she said. “I’m talking about formulas that have been used for thousands of years, and they’re still being used in their original forms today.

“This is not new. This is alternative. This is traditional medicine.” 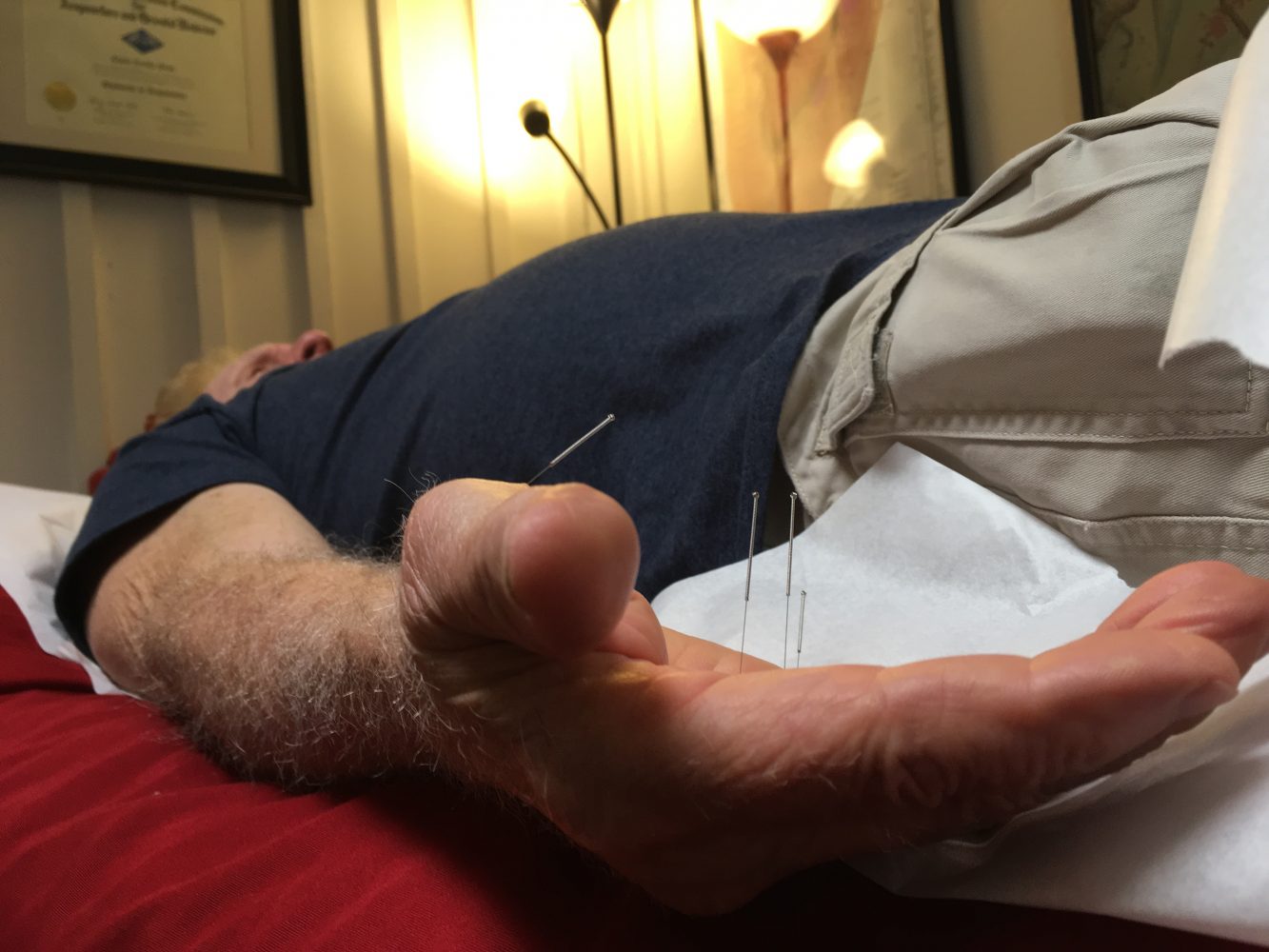 Gainesville is home to two acupuncture schools: Academy for Five Element Acupuncture downtown and Dragon Rises College of Oriental Medicine in the northeast part of town. Leavy co-founded Dragon Rises, and she taught several of the acupuncturists that now practice around town.

Acupuncturist Angela Middleton attended Five Element and owned a self-titled practice in Acupuncture Alley for a few years. Now working out of her Gainesville home, Middleton has been practicing for a total of about six years.

She said that since she switched to alternative medicine from Western medicine for her own medical care, she hardly ever visits a doctor.

“We get to the root of the problem, not just treat symptoms,” Middleton said of herself and other acupuncturists.

Another option for alternative treatments in Gainesville is UF Health Shands Hospital’s Integrative Medicine Program, a non-educational program created in 2013 that provides such treatments to patients of the hospital.

David McMahon, an acupuncturist in the program and past student of Leavy’s at Dragon Rises, said many hospitals around the country have similar programs.

McMahon said he treats cancer patients who experience side effects from chemotherapy as well as those with chronic pain.

Addiction, though, like to opioids, is a different animal altogether, he said, noting that he hasn’t come across such a patient yet in the program. In terms of treating addiction, McMahon said that acupuncture does show potential.

“When it comes to treating chronic diseases, [Western doctors] can only do so much,” McMahon said. “Medication is what they work with, but they also have physical therapy and massage therapy, and it’s beginning to open up that if you include more holistic therapy, you can be more effective in treating your patients.”

In 2016, Gainesville had 15 oxycodone deaths, eight from hydrocodone, and five from methadone, according to a report from Florida’s Medical Examiners Commission. (The three are medically legal forms of opioids.)

North Central Florida overall sees many people abusing opioids in conjunction with other drugs, such as cocaine or amphetamines, said Stephen Straubing, a physician at Meridian Behavior Healthcare, a Gainesville mental health clinic that provides services related to substance abuse.

To help those with addictions, Meridian offers behavioral therapy, weaning and detox medicines, and support groups, among other strategies.

“There is still a great stigma, a lack of knowledge and the desire to adequately treat these individuals,” Straubing said. “In Alachua [County], we unfortunately do not have the infrastructure available to treat everyone who wants to be treated. We are one of the few facilities that treats a lot of indigent patients.”

To help treat her patients with addiction, acupuncturist Leavy and a partner of hers, Gainesville herbalist Richie Ogulnick, created a mixture of Chinese and Western herbs that they say can reduce symptoms of withdrawal, including diarrhea, sweating and anxiety, as well as increased dopamine and serotonin levels.

Their powder-based formula, TaperAid, is modeled after a Vietnamese mixture called Heantos, which is unavailable in the United States.

“I wanted to create something that I could reach a million people with,” Ogulnick said, referencing people trying to walk away from addiction.

Leavy said she adjusted the formula to specifically allow the liver to detox harmful chemicals and calm the user.

“People would take this formula and take so much less [opioid] medication to get high or relieve pain so that they could function,” she said.

After about a year and a half of experimentation and trials with about 160 clients, Leavy and Ogulnick began selling TaperAid online.

But Leavy warned that TaperAid and supplementary acupuncture don’t necessarily force somebody to stop abusing drugs. “You still have to have a lot of support,” she said.

“As far as getting [TaperAid] out there, making it part of drug addiction programs, it’s not gonna happen,” she said. “Who’s gonna pay for it? The government doesn’t pay for herbs.”

Insurance does not always cover alternative medicines in general, the acupuncturists interviewed said, so they usually offer sliding-scale prices based on what the patient can pay. Though none currently do it, some suggested even using group acupuncture to be able to treat more people at a lower price.