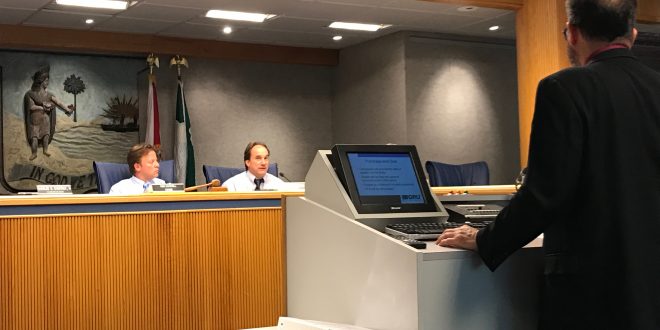 The $750 million purchase by Gainesville Regional Utilities of the biomass plant in the city came before the county commission Tuesday night.

Though the biomass plant, or the Gainesville Renewable Energy Center, is overseen by GRU, a city entity, Alachua County commissioners delved into the issue Tuesday because about 25 percent of GREC’s energy customers are in the unincorporated county.

In front of the five-member commission and about 20 interested residents, GRU General Manager Ed Bielarski presented the biomass-plant purchase, which seems to be entering its final stages.

The purchase would end the years-long disputes between the two entities, rooted in GREC leaning on the 30-year agreement the city signed in 2009 but the city now wanting free because of GREC’s high costs.

If the agreement proceeded unchanged, GRU would be obligated to pay GREC about $2.1 billion from now through the next 24 years, Bielarski said.

The $750 million purchase of GREC by the city “is a good price for GREC,” he told the commission. “It’s a proverbial win-win.”

Though the county doesn’t have direct authority over the GRU-GREC negotiations, their purpose of meeting Tuesday was to simply discuss the matter. But they also voted to send a letter to city commissioner asking that they don’t yet sign an agreement (called a memorandum of understanding) with GREC until the lawsuit it has against the city is settled.

GREC’s lawsuit notes the 30-year agreement and GRU’s efforts to not uphold it.

The county’s letter requests that the city speed up the arbitration on the lawsuit before an agreement on the $750 million purchase.

But Bielarski said the acceleration recommendation would likely stir the pot as GRU and GREC moved forward and that matter should be resolved at their current pace.

Once they are and the city makes the purchase, GRU customers would see 8 to 10 percent reductions in their utility rates, including those in the county, Bielarski said.

The savings primarily come from GRU being able to use the biomass plant only when needed instead of continually paying GREC regardless.

While the $750 million purchase sounds like a good idea, county Commissioner Charles Chestnut IV said he worries about rate fluctuations for his constituents.

“I’m just a common guy, and I can understand why you want to purchase it,” he said. “For this to be a good deal, folks will have to know what your rates are.”

“This is a good deal,” he told Chestnut. “I will say [current utility rates are] too high, but this is a way to get it down.”

After the commissioners and Bielarski’s nearly four-hour discussion — which also included comments from several citizens who leveled accusations ranging from “incompetence” to outright “fraud” in connection with the underlying GREC agreements — the motion on the county sending the letter to the city passed 3-1.

Commissioner Robert Hutchinson dissented, saying that he agrees with Bielarski in that the pace and method GRU is taking is appropriate.

“I think the track that [Bielarski] is on is more likely the track to success: lowering of rates, lowering of the debt ratio for GRU, and in general will help move this community forward,” he said.

Cornell said the letter is just a recommendation for the city to consider.

The city commission is set to discuss the purchase Thursday, March 29, at 6 p.m. at City Hall at 200 E. University Ave.

Bielarski said he will also hold another public forum at the Gainesville Police Department on Northwest Eight Avenue from 6 to 8 p.m. on Monday, April 3, during which customers can ask him questions about the GREC purchase and “throw tomatoes” at him if they wish.

This story has been updated to include Thursday’s scheduled city commission meeting on the purchase.