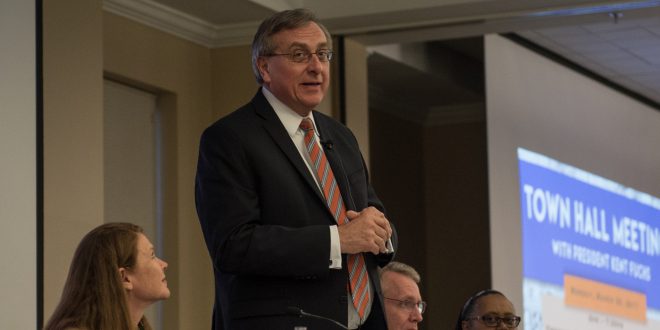 University of Florida President Kent Fuchs delivers closing remarks at Monday's town hall on the racial climate at the university. “This is not the end but a continuous engagement,” he said. "If you see the president messing up or being silent, please email me or meet with me." (Gabrielle Beecher/WUFT News)

In front of 300 students, staff and faculty, William Walker leaned in to the microphone and glanced at his pad of paper.

The University of Florida senior locked eyes with President Kent Fuchs — who sat in front of the room alongside a panel of three other administrators — and cleared his throat.

“Why did you remain quiet during Black History Month?” he asked, citing incidents of racial slurs written on classroom boards and in bathrooms that weren’t publicly denounced by the president. “You remained silent, and why? And at what point can we trust that you’re invested in us? Why should we trust you today?”

There was a collective gasp across the room. Then, applause.

Monday’s town hall — hosted by the university’s Black Affairs and the 16-person Black Student Affairs Task Force — focused on the findings and recommendations of the task force on improving inclusion, diversity and the racial climate at UF. By the time the event in Emerson Alumni Hall began at 6 p.m., the room was almost full, and an overflow room was prepared.

Task force co-chair Will Atkins and member Katrice Graham presented data findings. Of the nearly 600 students who responded to a survey about UF’s racial climate of UF:

One student who filled out the survey anonymously noted that the mere fact that she or he had to fill out the survey showed that it wasn’t possible to enjoy the undergraduate experience without having to “do a little bit more” than students of other races.

“My racial experience at UF was so bad and traumatizing my freshman year that I wanted to transfer to [a historically black college and university]. Only the strong black community kept me at UF,” says the student’s response, which wasn’t presented at the town hall but is available online among the other responses. “Administration says that ‘every Gator counts,’ but the university’s racial past is blatant everywhere one looks.

“The O’Connell Center and Reitz Union are two of the buildings that are named after people who did not want to integrate the university and do not want me here.”

More than half of the survey respondents said they had experienced “microaggressions” at UF, and 81 percent noted that they had been the only black student in at least one of their classes.

“Unfortunately, what this data told us was that students view UF as a place to survive,” said Graham, director of the Knight Division in the College of Journalism and Communications.

Evans noted that UF is improving regarding its admissions.

Despite this, UF’s black student population remained below the average across all Florida colleges as of 2014, according to data from the U.S. Census Bureau.

Evans touched on concerns about a decline in black faculty and staff, as well as black student admissions.

She said that UF is piloting a program with six Florida high schools in which key components of college admissions — rigorous coursework, leadership and community engagement — were identified and turned into benchmarks for students.

“There is a monetary opportunity for each benchmark they hit,” she said. “If you do this or reach this benchmark, we will give you the financial support when you get here.”

But the panel agreed there’s room to improve.

“The last 12 months have been rough in terms of having an environment that is supportive,” Fuchs said. “We’ve had about one significant incident per month – from hateful vandalism, to fliers, to a noose, to two people with swastikas on their jackets.”

Monday’s town hall came as the completion dates for the reconstruction of the La Casita, which houses the university’s Institute of Hispanic-Latino Affairs, and the Institute of Black Culture was pushed to the spring of 2018 after delays from architects. Discussion of this incited vocal dissent from the crowd.

But action items and recommendations from the task force are already in motion, according to the panel, including: the town hall itself; the creation of a Black Cultural Living Learning Community, which is set to launch this fall in Graham Hall; the reestablishment of a transitional program for incoming black students; and the creation of a chief diversity and inclusion officer.

Evans also noted that the university is increasing outreach to underrepresented students through workshops, pilot programs and showcase days.

“It’s about relationships,” she said, “and it’s about building the pipeline.”

As the question-and-answer portion of the night began, Walker, the student, questioned the relationship between black students and Fuchs, quoting graphic racial slurs from incidents on campus and asking why the president should be trusted after remaining silent on the matter.

“My intention is never to remain silent,” Fuchs said. “Evaluate a person by their actions, not their words. I think it’s important to communicate.

“In terms of trusting someone, you have to view what they do as well as what they say.”

Other questions from the crowd included inquiries into safe spaces pending the completion of La Casita and IBC, the possibility of a “day of acknowledgement” in which UF acknowledged race and racism on campus with the desire to make change, and retaining black staff and faculty.

UF is one of the top producers of black faculty in the country, and the intent should be to build the staff of tomorrow to combat the greater issue, Provost Joe Glover said.

“If we’re stealing them from other universities, we’re not fixing the national problem,” he said.

The panel and the task force told attendees that the progress of all initiatives will be tracked and that the full report from the task force is available online. In the meantime, moderator Florida Bridgewater-Alford, director of University Relations, thanked those for attending, though something from her initial welcome still hung in people’s minds.

“I remain hopeful,” she said, “not gullible.”

Lena is a reporter who can be contacted by calling 727-534-6278 or emailing l.schwallenberg@ufl.edu.
@@l_schwallenberg
Previous Former Gator Tim Tebow Headed To Class A Team
Next March 21, 2017: Afternoon News in 90