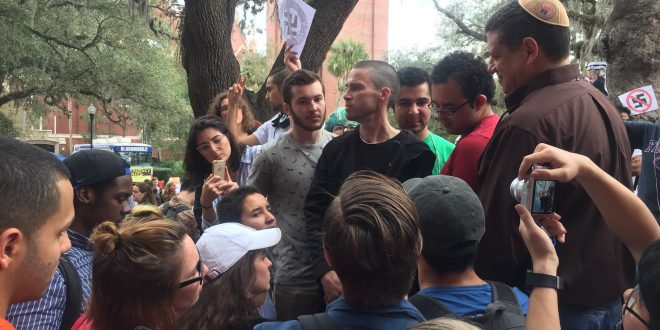 Protesters confront Michael Dewitz (in middle in black) for wearing a Nazi armband today at the University of Florida's Turlington Plaza. After standing there for almost three hours and drawing a crowd of a few hundred, Dewitz left with two university police escorts. (Monica Humphries/WUFT News)

Man Wearing Swastika Explains Why He Came To Turlington Plaza

Michael Dewitz, the 34-year-old man who wore a swastika armband at the University of Florida on Thursday, said by phone that it was never his intention to “maintain or support racism in any way, or support violence in any way.”

He said he returned to the campus after receiving a message from a woman who encouraged him to go to Turlington Plaza to answer questions. Asked about why he decided to wear swastika, he added: “I can’t really give you an answer of why exactly.”

“Everyone was yelling at each other,” Dewitz said. “No one truly agreed with the whole situation. Everyone was in opposition to me.”

He said he does not plan to come back to the campus, adding that he thinks protesters should not have threatened his life.

Two men were arrested for allegedly attacking and stealing a swastika-adorned jacket from 34-year-old Michael Dewitz.

Daniel Schexnaydre and Alex Flinchum were arrested on Thursday on charges of robbery and conspiracy, according to Alachua County jail records. Schexnaydre was also charged with tampering evidence.

As of Friday afternoon, both Schexnaydre and Flinchum remain in jail in lieu of $15,000 bond.

University of Florida President Kent Fuchs released the following statement after a man wearing a swastika armband at the university today drew a crowd of 200-plus protesters.

As the University of Florida continues to support the peaceful gathering of students at Turlington Plaza in response to the man with a swastika on his armband, I want to be clear that I do not accept such symbols of hate.

As noted in Tuesday afternoon’s university statement, swastikas are symbols associated with the Holocaust, which exterminated six million Jews as well as multitudes of individuals from other persecuted groups on the basis of their race, religion or sexual orientation. The University of Florida encourages inclusion, respect and empathy for others, not hate.

Many people have contacted the university to ask that the individual be removed from campus. While I decry and denounce all symbols of hate, the individual, who is not a faculty, staff member or student, was expressing his First Amendment rights and we could not legally remove him from public areas of campus.

The UF administration, staff and campus police continue to monitor the situation closely. I encourage everyone at the university to participate in open and civil dialogue as we continue to support each other and build a caring community.

As always, if you are aware of members of the UF community in distress, please contact U Matter, We Care at umatter@ufl.edu. If you are a victim of a crime or see something suspicious, please report it to the police.

A man who wore a swastika armband at the University of Florida today and drew a crowd of 200-plus protesters was attacked shortly after he left the site of the protest.

Michael Dewitz, 34, was “jumped” shortly after 2 p.m. by two men who got out of a red pickup truck on Northwest 13th Street at Eighth Avenue, struck him, and stole his jacket and swastika armband, said Ben Tobias, a Gainesville Police Department spokesman.

The men then got back in their truck and headed northbound on Northwest 13th Street, Tobias said, adding that police are searching for the vehicle and suspects.

He was initially escorted from the protest site by university police, but the officers left his side shortly after he was away from the crowd.

A crowd of 200-plus protested a man wearing a swastika armband on the University of Florida’s Turlington Plaza this morning and afternoon.

The man — whom the Independent Florida Alligator identified as 34-year-old Michael Dewitz — didn’t respond much and remained largely silent even as protesters came within inches of his face, waved makeshift signs and yelled chants like, “No more Nazis! Never again!”

One protester even attempted to remove the armband from him.

Dewitz, who isn’t listed as a student at the university, remained there from about 10:45 a.m. to 1:30 p.m. before walking away with two university police escorts. He was first seen wearing the armband while riding his bike on the campus Tuesday.

After he arrived in the plaza Thursday, about 50 or so protesters quickly gathered around him, but that number mushroomed into the small hundreds.

“I think we did a really good job of staying peaceful and keeping things fairly civil and staying united,” said one protester, Thomas Moseley, a telecommunications student at the university, who stood next to Dewitz for most of the protest.

Clothed in all black except for the swastika armband, Dewitz stood on a bench above the protesters.

As the crowd grew, so did the tension, especially when he performed a Nazi salute.

Shouting matches broke out among protesters over whether those gathered should be quiet enough to let him speak. At one point, a man spit on Dewitz’s shirt.

Almost three hours after Dewitz arrived, the crowd parted when he responded yes to a protester wearing a yarmulke asking him if he wanted to leave. The police then escorted him through the crowd out to Newell Drive.

Moseley said he thinks this may not be the last time Dewitz makes an appearance at UF.

“I can’t help but feel like this might just be a drop in the bucket,” he said.

Kirsten is a reporter who can be contacted by calling 352-392-6397 or emailing news@wuft.org.
Previous After The Women’s March, Gainesville Feminists Commemorate Roe v. Wade
Next Universities Mark Progress, Face Challenges