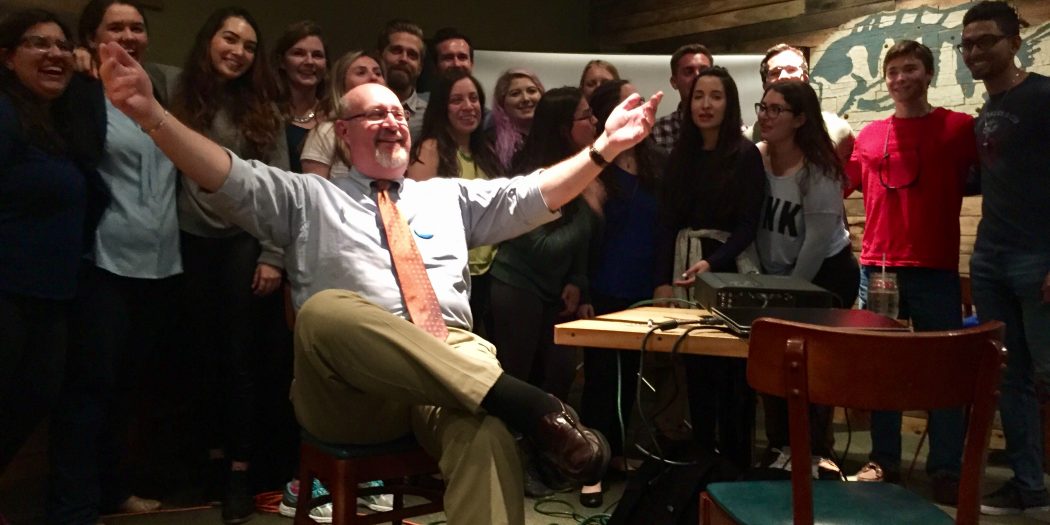 The votes are in for Gainesville City Commission seats in District 2, 3 and one At-Large seat. Polls closed at 7 p.m. Tuesday, bringing new and old faces to the seats.

Carter served one term in District 3, and blamed his loss to the now youngest city commissioner, Arreola, on his Republican Party affiliation. After Carter made his concession speech less than an hour after polls closed, Arreola made an entrance to his shared victory party with District 2 winner Ward.

The At-Large race ran latest and closest, with Warren beating Powell by 54 percent. Powell, a force behind Gainesville’s Bernie Sanders campaign, made her voice heard, despite the loss.

Voter turnout in Gainesville was 11.88 percent, with 10,471 ballots cast, down from the 12 and 15 percent turnout of pervious off-election years, according to the Alachua County Supervisor of Elections website.

David Arreola beat incumbent Craig Carter with 65 percent of the vote, cementing his place as the youngest city commissioner in Gainesville history, according to Arreola.

“The work that I have been assigned by the people tonight is truly something that should humble any man or woman,” he said. “I feel very grateful, and I’m looking forward to getting started.”

"I feel very grateful and I'm looking forward to getting started,"

His first major plan, he said, is to look at the way the city handles development.

“I made a big issue about growth management, and so I’m going to be taking a good hard look about how Gainesville is going to continue growing and how we can really fulfill what I think is our destiny to continue to be a university town with a more diverse professional set of jobs that are available to our citizens,” said Arreola.

“It’s not looking good,” Carter said to a few of his friends.

Shortly before 8 p.m., Carter gathered the attention of his crowd to give a concession speech.

Chinese Nationalist Luan helped Carter campaign after he helped Luan and 12 others find a new home when they were having issues @WUFTNews pic.twitter.com/JZJKGyQkgC

Choking back tears, he thanked his supporters, his wife and the volunteers who helped campaign for him.

Ultimately, Carter blamed his loss on his Republican affiliation.

“I had a terrible ‘R’ next to my name, and that’s what cost me the race,” Carter said.

Warren, who held an election watch party at First Magnitude Brewery, anticipated a close race for the commission seat.

“In the middle of your friends and they’re telling you you’ve got their support, you know there are other people that are out there with their group of friends, too,” Warren said. “It just kept me and my team focused on, we need to get people to vote, and we need to make people understand what the issues are.”

Results in: Hellen Warren wins with 54% of the vote. @WUFTNews pic.twitter.com/A6eCWg9BrG

With another three years, Warren plans to generate new ideas, including some to connect the University of Florida and the Alachua County School Board to provide after-school activities to for youth.

“You really just get started with three years,” Warren said. “A lot of the community isn’t aware of some the problems that we have. When things are going good for you, you don’t realize where other people are having a lot of challenges, and that is where I want to be able to put together some new services.”

Warren also seeks to continue her efforts in raising living wages to $15, despite initially voting against it.

Jason Stanford, Warren’s campaign manager, was happy with the results and the overall campaign strategy.

“We went into this knowing we were going to run a positive campaign,” Stanford said. “We weren’t going to be negative, we weren’t going to criticize other people for participating in the process, and we ran on our record, and I think that resonated in people.”

Helen on the close win: "With the mood in politics across the nation, you don't ever anticipate that it's an easy win." @WUFTNews pic.twitter.com/dsCq8s6q68

No candidate should have to run unopposed,” Stanford said. “I am glad she participated in the process, and I hope she will participate again. She is needed in this town.”

“We have not seen the last of Jenn Powell. I’d love to see her run for something in Gainesville or Alachua County in the near future because she just represented herself very well.”

Powell was happy with her entirely volunteer-run campaign.

“I’m feeling awesome,” Powell said. “I mean, I got into the race late, we had the entire city to cover, I won a lot of precincts. So I’m really proud of the campaign that my volunteers ran.”

Harvey Ward Jr. prevailed Tuesday night in the three-way race for the District 2 seat, obtaining 50.57 percent of the vote with 2,261 votes.

Gainesville native, Ward Jr., faced off with Perry Clawson, a retired colonel and former small business owner who previously sat on the city’s police and firefighters’ pension board, and Sheryl Eddie, a Gainesville resident of 27 years who has worked with the Alachua County Children’s Alliance.

Ward gave credit to his staff and the Gainesville community for his victory.

“I hired the right campaign manager and brought the right folks on board,” Ward Jr. said. “I had great support from the community and that’s all a candidate can ask for.”

Ward said he enjoyed his campaign experience, going out and talking to as many Gainesville residents as possible.

“It was a lot of fun to work this campaign, we talked to thousands and thousands of voters and I appreciate the people of Gainesville supporting me.”

Addressing a room a supporters after his loss, Clawson thanked the crowd for their efforts attempting to get him elected.

“Everybody that’s come, thank you so much,” Clawson said. “Things don’t always turn out the way we wish they did, but I wouldn’t have changed anything, how we ran this race. We ran a good, clean race, we gave it our all, we stuck to our campaign plan.”

Clawson made a point about how even though the commission races are nonpartisan, his party affiliation affected his chances to win.

“It just shows you that if you run in Gainesville and you don’t have a “D” after your name, it’s hard to win,” Clawson aid. “The only thing I could’ve done differently is run as a Democrat to maybe have a better chance to win.”

Perry Clawson says he will continue to work with the community but doesn't see himself running for a political position again. @WUFTNews pic.twitter.com/cyRFoYhKpR

As for what’s next, Clawson plans to take it easy.

For more information on each candidate, see our candidate profiles here, in our 2017 Gainesville City Commission Election Guide.

Baylor Cherry is a reporter for WUFT News and can be reached at 727-916-0142.
@@BaylorACherry
Previous Rape In Gainesville And The Fight Against It
Next March 15, 2017: Morning News In 90