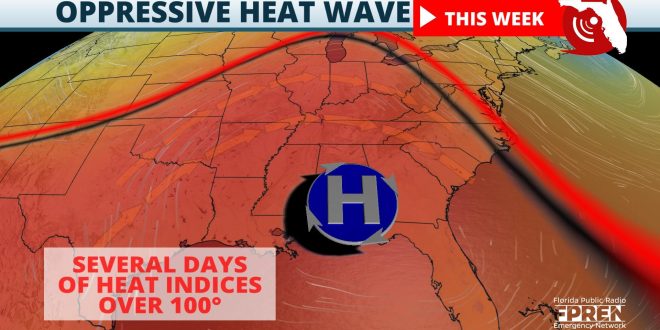 A record-setting heat wave is developing over the Southeast, including over the state of Florida. Several days of temperatures in the mid to upper 90s and heat indices near 110 degrees are expected this week. A heat advisory is already in effect over the westernmost counties of the Florida Panhandle. 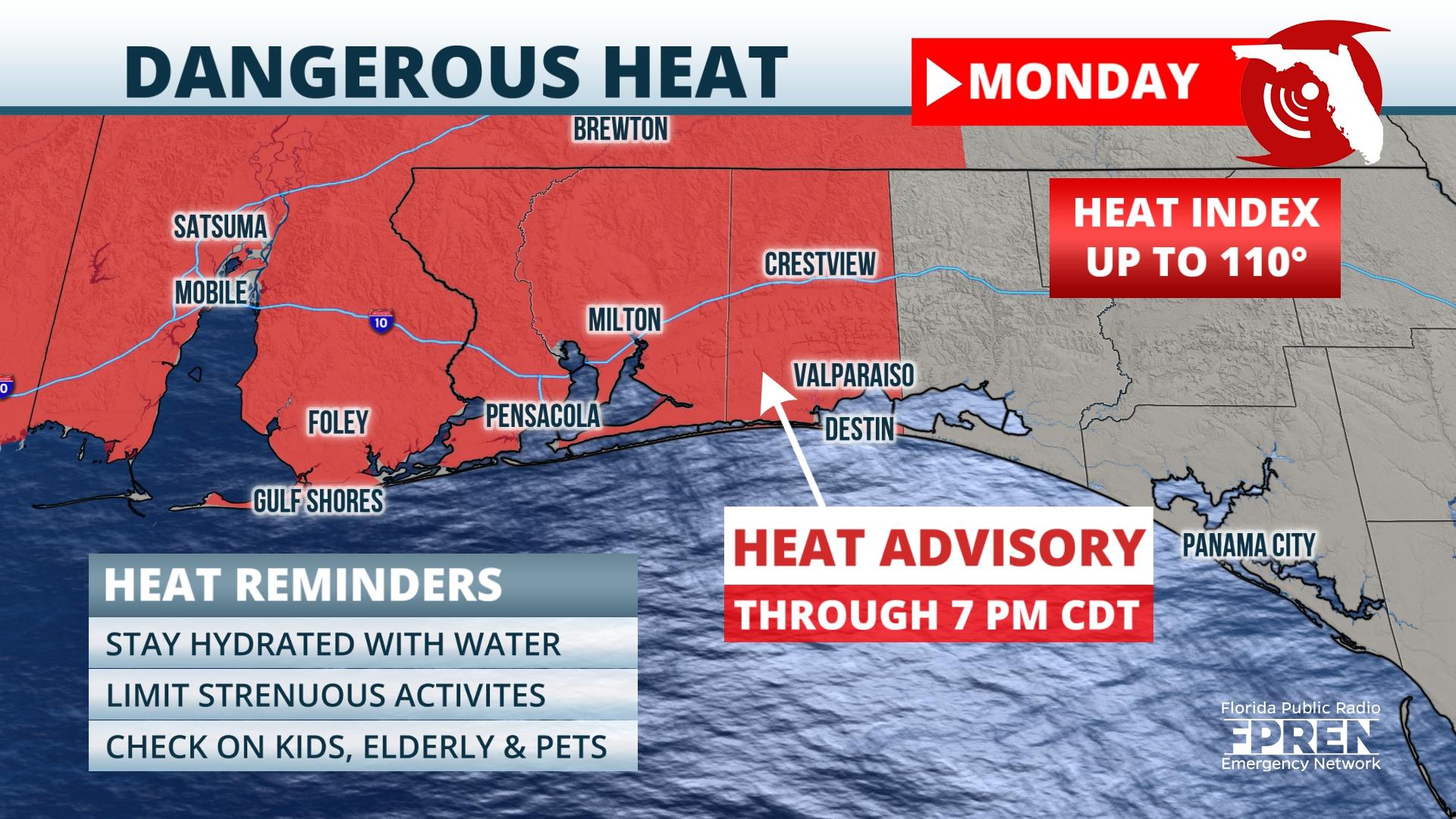 Last week, a strong area of high pressure developed over the Desert Southwest and Northwestern Mexico. This atmospheric feature which serves to increase surface temperatures, has slowly migrated eastward and, as of Monday morning, is sliding east of the Mississippi River. As the week continues, forecast models are in agreement that the mid-level high (or “ridge”) should retain a strong influence over temperatures in the Mid-Atlantic and Southeast.

The Panhandle and northern and central parts of the peninsula are expected to be most substantially impacted by the heat wave, as these regions will be closest to the center of mid-level high pressure. In these locations, afternoon highs are expected to soar to the mid-90s by Wednesday and the upper 90s by the end of the workweek. Humidity levels are expected to remain elevated, and this will contribute to even higher heat indices, likely near 110 degrees. It is probable that Local National Weather Service offices will issue heat advisories over the northern half of the peninsula and the entire Panhandle each day through the end of the week. 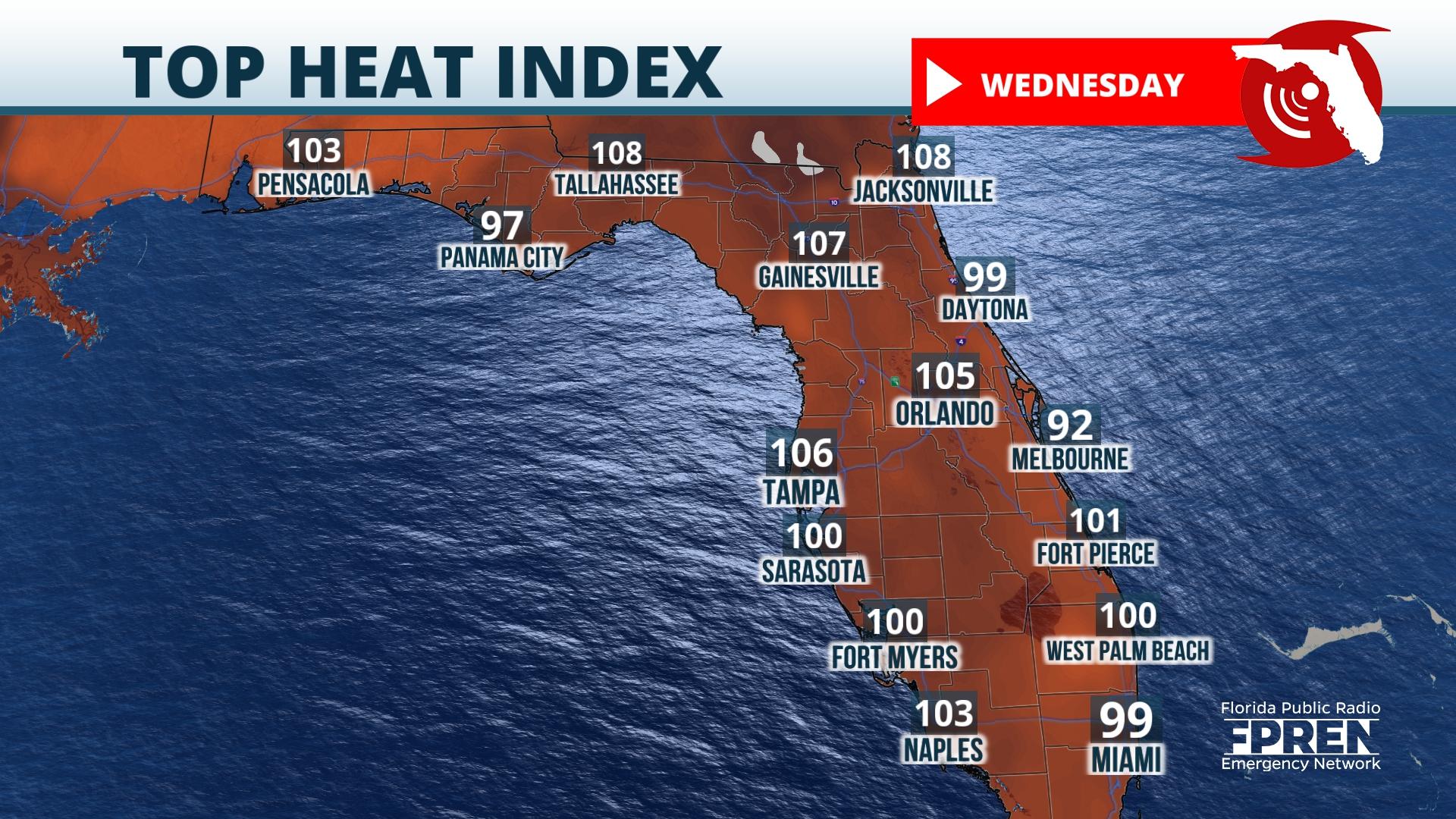 South Florida and the Keys should be spared from too much of a temperature increase this week, although substantial humidity levels will contribute to uncomfortable heat indices in the upper 90s.
https://twitter.com/NWSMobile/status/1536281020399599623

With stifling temperatures in the forecast, it is important to recall heat safety practices. If you must spend time outside, drink plenty of water, take breaks in the shade or inside, and wear loose fitting and lightly colored clothing. Never leave anyone unattended in the car. Yes, this includes pets.

Megan is a multimedia meteorologist with the UF Weather Center, the Florida Public Radio Emergency Network, and the South Carolina Emergency Information Network.
Previous The Point, June 13, 2022: State acknowledges the Rodman Dam is at risk of breaching, a report shows
Next Average gas price hits $5 per gallon in areas of Florida