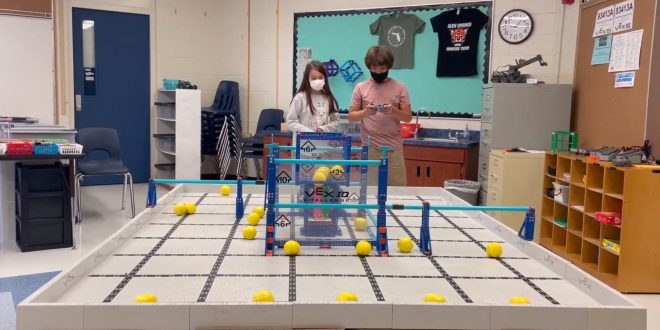 In just six months, two fifth graders from Glen Springs Elementary Schooljoined their school’s robotics club and earned the right to compete at the VEX Robotics World Championship from May 10 to 12.

Since joining, the duo has won awards for robot competitions at district and state level competitions, most recently qualifying in a couple categories to send them to Dallas, Texas for the world competition.

Sophia and Aki are nervous, yet excited, to face off against teams from countries like Japan, China, Australia, Dubai, Turkey and more, they said.

While they realize other teams will have years more of experience than them, they said they wouldn’t let that stop them from achieving their goal: Placing among the top 50 teams in the world.

“They come from everywhere,” Sophia said. “But, we always are trying to win.”

Eolaithe Óga — meaning Young Scientists in Irish — is their team’s name and a tribute to the von Meding family’s Irish background. The Young Scientists’ skills are ranked 223 out of more than 2,500 teams competing at worlds, according to the tournament’s website. The event is sponsored by top tech companies like Northrop Grumman, NASA and Google.

There will be three levels of competition at worlds: one for elementary, two for middle schoolers and one for high schoolers. Only three North Central Florida elementary teams made it to the tournament, all from Gainesville.

The duo’s coach and teacher Jeanne Diehl is amazed with how Sophi and Aki connect. She is confident they will continue making history for their school.

Aki joined the robotics club last fall without having an idea that he’d be competing on the world stage. Although he joined the club initially because his friends and him thought it would be fun to build robots, he has proven he’s capable of competing against the best teams from around the city and soon, the world. Sophia first learned her skills and grew her competitive drive at home  with her older brother.

Her interest in robotics comes from her older brother, Judah, she said. Their dad, Jason von Meding, is a professor at the University of Florida’s school of construction management. He said his son, 13, has always had a knack for any technology or math-based activities.

“When we moved to the U.S. three years ago, one of the first things he did was go to a robotics camp,” von Meding said.

During his son’s fifth grade year at Glen Springs Elementary, the school received its first VEX Robotics kit. His son was a member of the robotics team in the same school year and reached the state competitions. Now in middle school, Judah is still pursuing robotics and is leaving big shoes to fill for her little sister.

“My brother was in robotics, and he told me to carry on his legend,” Sophia said.

Under the guidance of Judah at home, Sophia built a robot and started driving it. No one else in the club produced a driveable and ready-to-compete bot at that point in the year, so they decided to host a drive-off to determine who would be Sophia’s partner, her father Jason von Meding said. A drive-off is a race to determine who among the club’s students is the better driver.

Aki won the competition, cementing his partnership with Sophia. Since then, the Young Scientists are on their third robot built and have won awards at district and state level competitions.

“I thought we were just building robots, not competition,” Aki said, regarding his first impression of the robotics club last fall.

Sophia and Aki followed in her older brother’s footsteps when they won the Build Award — a sturdy, well-crafted robot — in their district competition. In the state competition, they got third place for teamwork and won the Amaze Award — amazing, well-rounded and top-performing robot.

The kids’ coach and teacher, Jeanne Diehl, said the duo sat in first place for most of the state competition. Diehl said the children seemed deflated when they dropped from first to third. As they prepared for the world competition, Diehl noted Sophia’s and Aki’s professionalism and skills helped them stay on track.

Sophia and Aki said their biggest rivals are the teams from Wiles Elementary School, GALE and Era. During the state competition, the Young Scientists were in first place until their rivals took the top spots.

“Yeah, I have some beef with them,” Aki said.

Every tournament includes several rounds, and each team receives points and a ranking based on their teamwork, game strategy, and robot design. A timed round in the competition consists of 30 seconds for one driver and 30 seconds for the other. Tasks include gathering balls, shooting them and maneuvering. At the end of the tournaments, multiple awards are given out to the teams that competed, like champion, second, third and fourth place teamwork awards, the judges award, the excellence award, the design award, the think award and more.

In the world competition, the tasks are the same and each team will be interviewed remotely by a panel of judges.

Sophia is the first driver, gathering most of the balls on the table and shooting at least six of them into the bucket before the 30 second time limit to switch. Aki is the second driver, tasked with picking up the balls that are in difficult spots to give them bonus points.

At Glen Springs Elementary, Sophia and Aki are in different classes and said they didn’t know each other very well before they became teammates. Now they finish each other’s sentences, Diehl said. She believes the students’ shared competitiveness, complementary skill sets and determination will allow them to make a name for themselves in Dallas.

Despite Sophia’s desire to join the Westwood Middle School robotics team as one of her brother’s partners next school year, Diehl hopes Aki and Sophia remain teammates.

“I think it would be awesome if they remained drivers together to see what three years at Westwood would do for them,” Diehl said.

Throughout middle school, Sophia and Aki plan to take robotics classes. Afterward, they plan to pursue robotics as a hobby, as they have other similar interests in mind.

“What will our jobs be?” Sophia pondered. “A writer,” both agreed. “I’m already starting my books… about fantasy!” Sophia said.

Troy is a reporter for WUFT News who can be reached by calling 352-392-6397 or emailing news@wuft.org.
Previous The Point, May 2, 2022: Felony charges follow UF students caught with fake IDs, but few result in convictions
Next Gainesville’s number of minority businesses ranks high nationally, a study suggests