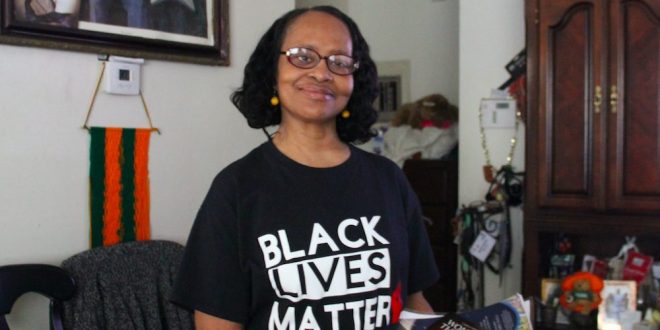 Edwards has always been a dancer. It doesn’t matter the time of day or the type of music – although African and Jamaican slow jams are her favorite. Dancing keeps her young.

At 65 years old, Edwards’ youth is past her, but she remains lively. On this March afternoon, she lightly hums to her music and punctuates her stories with unrestrained laughter as she answers work calls on one phone and hits snooze on medication alarms mid-sentence on another. Her lime green pants would be the brightest thing in her shades-drawn and house-plant-filled living room, if it wasn’t for the radiance in her words .

It is clear age won’t be what stops her in life – very little has. Not even AIDS.

Edwards’ knack for dancing to her own beat and effortless compassion when storytelling may not come as a surprise to those who know her. But to others, her nothing-can-bring-me-down demeanor might not quite align with the past she’s endured or the work she does today.

Diagnosed with AIDS in 2003, Edwards has, at times, been on the brink of death. Now, she spends her days serving those who may have come just as close, as she works to channel her past to extend the lives and livelihood of others.

After work, her focus remains on the HIV and AIDS volunteer-based support groups she leads, HIV support group Peers Empowering Peers, women’s group Let’s Talk About It and more.

Her God-given gift of gab is a significant source of her passion and influence, she thinks. Her coworker and friend, Fran Ricardo, cofounder and director of development for Gainesville’s Rural Women’s Health Project, would say otherwise.

“There’s some people that have a real sense of intuition, a sense of compassion and really grasping the nature of what people need,” Ricardo says.

The two work together in serving others through Let’s Talk About It, a local nonprofit women’s group that sprouted from Rural Women’s Health Project, a health justice nonprofit organization for North Florida.

It is clear age won’t be what stops her in life – very little has. Not even AIDS.

Edwards believes the only way to connect with those in need is to educate. And to her, that begins with sharing her own story.

Edwards was diagnosed with HIV 34 years ago. Another 16 years later, she learned the virus had developed into full-blown AIDS.

“I was chosen for this. Whatever way I got it, I got it,” she says. “I won’t allow HIV to dictate my life.”

Edwards was a 31-year-old mother of four when two men attacked, raped and shot her in the head on a walk home from a nightclub in Princeton, Florida. When she was found the following morning by a woman and her dog, Edwards had no pulse. The paramedics took her for dead and stuffed her lifeless body into a body bag.

When checked again, Edwards had a light pulse and was transported to Jackson Memorial Hospital in Miami, where she was told she had HIV.

“Just hearing that – someone saying, ‘You’re HIV positive.’ It just takes all your oxygen away,” she says.

It was 1987. The AIDS epidemic was ravaging its way through the country; a diagnosis was more often than not a death sentence. Anti-AIDS stigma was unwavering, yet only just beginning, as was Edwards’ ensuing lifelong tie to the virus.

Her diagnosis left her with little direction or sight of herself; she lost custody of her four children and succumbed to drug and alcohol abuse while accumulating an arrest record. Despite growing up under her mother’s strict Christian values, she was severed from the side of herself that went to church every Sunday and preached to her dolls.

“I did things that I thought I never would do,” she says. “A monster was created, and that monster had to be slayed.”

Edwards credits much of her ability to grow from that slain monster to her therapists, HIV counselors and doctor, Jill. Her AIDS diagnosis was met with no authority on her end; she was doing little to keep herself alive.

But these days, Edwards shies away from sharing that part of her story. She calls what has happened to her since an evolution, and only revisits her “drinking and drugging”-filled past when God tells her someone needs to hear it.

“I refuse to be faceless,” she says. “I want you to see – to see what it looks like today.”

“I refuse to be faceless,” she says. “I want you to see – to see what it looks like today.”

The support system she had helped introduce her to the local community surrounding HIV-positive individuals and the services available to them. Seeing people living with and living despite their diagnoses ignited in Edwards a newfound interest in not just existing but living as if she deserved to.

Through her work today, Edwards is able to connect with people who face the same struggles she’s known. Whether it be to a crowd of people during an assembly, at an HIV and AIDS awareness march or in the privacy of an intimate counseling consultation, Edwards uses her story to save others, just as she was saved herself.

“I don’t do the work for me,” she says. “I do it for those that are afraid to use their own voices.”

Because, to Edwards, those are the worst cases: the people living in silence, the people broken down by the virus, by the stigma, by themselves.

She knows the self-hate and the fear that comes along with HIV and AIDS diagnoses because she’s lived it. Now, Edwards relates the isolation she felt then to isolation brought on by the COVID-19 pandemic. Staying house-bound with limited contact with friends, family and strangers is something she knows well.

“Back then, I did it just because I wasn’t able to deal with me,” she says. “Now I do it for my health.”

Other than altering her grocery shopping strategies and working events online, Edwards hasn’t changed much else about her day-to-day. Having experienced the AIDS epidemic in its height, as well as the political ramifications and stigma it brought about, Edwards can’t help but make comparisons to today. She urges people to put their trust in medicine and facts, rather than bias and hate.

Her fight for the HIV- and AIDS-positive community rages on, as does her anger toward the still tireless stigma surrounding the virus. There’s no end in sight to her work, and as time goes on, it’s inevitable to wonder whether Edwards’ endurance will ever waver.

Chloe is a reporter for WUFT News who can be reached by calling 352-392-6397 or emailing news@wuft.org.
Previous Ocala Woman Speaks Out Against Domestic Violence
Next Florida Population Boom Boosts Its National Political Clout