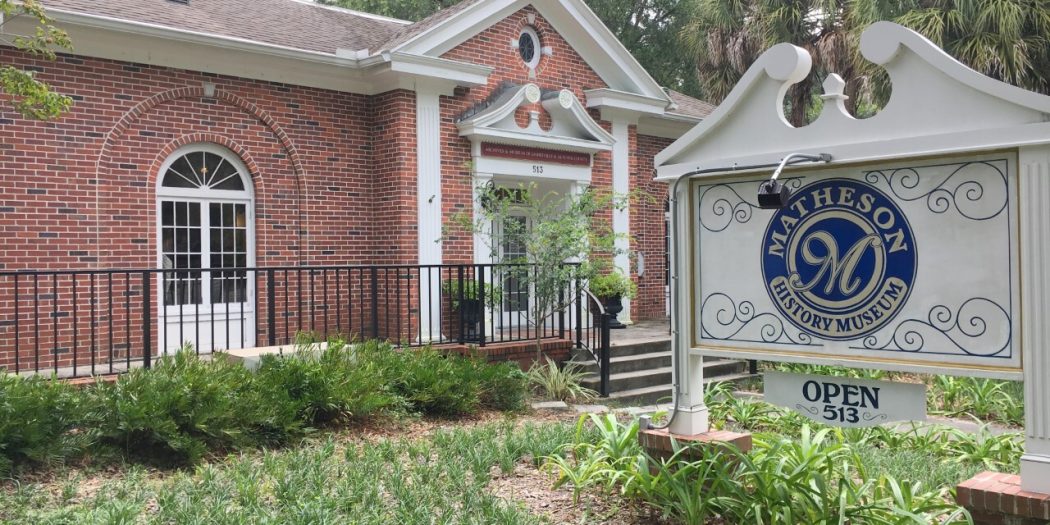 The Matheson History Museum, which first opened in 1994, has been closed since March 17, 2020, due to the coronavirus. (Photo courtesy of the Matheson)

The Matheson History Museum is celebrating its grand reopening on April 2 with a brand new exhibit featuring inspirational women of Alachua County.

The exhibit will honor the 100-year milestone of women gaining the right to vote in the United States.

The museum, which first opened in 1994, has been closed since March 17, 2020, due to the coronavirus. Its mission — to educate and inspire Gainesville residents on intriguing and prominent historical topics through its exhibitions — continued to some extent over the past year thanks to museum staff who worked hard to remain in contact with loyal followers through social media and Zoom.

Matheson Executive Director Dixie Neilson said the museum organized a social justice series that ended in December and was extremely popular amongst its viewers.

“We haven’t been happy about being closed but are grateful to have been able to stay in touch with our community,” Neilson said. “We are excited to welcome them back into the building and have a lot more face-to-face interaction.”

The museum has taken cautious measures in order to safely open in April. The museum will operate on reduced hours — open only from 1 to 4 p.m. on Fridays and Saturdays — with a limited capacity of 12 visitors in the building at a time. Both visitors and museum staff must wear face coverings that fully cover their mouths and noses at all times.

“Our opening will be handled by several of our board members, who are a tremendous help to us, serving as greeters at the door,” Neilson said. “The greeters will ensure that people have masks on and be aware that we have sanitizing stations.”

Even though the museum will be more restricted, people are excited to come back and see the new exhibit. Neilson said the museum has a very loyal following and the staff has been getting a lot of phone calls since they posted the announcement on their Facebook page.

Curator of collections Kaitlyn Hof-Mahoney noted that the Matheson History Museum seeks to preserve and interpret the history of Gainesville, Alachua County, and surrounding regions. COVID-19 is becoming part of that history, for better or worse.

“I think that people are really tired of being in their houses and are looking for something to do,” Hof-Mahoney said.

Marketing director Joanna Grey Talbot said as the daughter of a Gainesville native, she loves spending each day learning more about the area where her mother grew up.

“It is an honor to share the history of Alachua County with the greater community,” Talbot said.

The new exhibit to be featured at the museum’s grand re-opening is called “Trailblazers: 150 Years of Alachua County Women.” One of the main purposes of the exhibit is to make sure history is preserved and that these women’s stories and the impact they had on the county is known, rather than being overlooked or forgotten. The exhibit will be on display in the Main Exhibit Hall, while the other gallery, known as the Mary Ann Cofrin Exhibit Hall, will feature “McCarthy Moment: The Johns Committee in Florida,” which originally opened last January and discusses the history of persecution in the local LGBTQ+ community.

“It’s going to be an interesting exhibit that I think people will enjoy because I think they will recognize some of the women we are featuring,” Neilson said.

The museum has an interactive kiosk in the Main Exhibition Hall where some of the most popular past exhibitions are stored, including the Tom Petty Exhibit from last year. The kiosk typically includes exhibits that speak to the community. However, the kiosk will unfortunately be inactive this year upon the museum’s re-opening.

Neilson said even though the kiosk is not being used, there is a chalkboard where people can write their own names of females who have inspired them, as well as a candidate for Alachua County’s Woman of the Year.

“There’s a part where the audience can speak back to us and tell us who they found inspiring,” Neilson said. “Inspiration is our theme here.”

Hof-Mahoney said for people who are not yet comfortable coming to visit the museum in person, there are online exhibits, as well as several other resources available on the museum’s website.  There is also a COVID-19 community archive.

Currently, the museum staff is working on a digital version of their previous exhibit from 2018— Gators and Beyond: A Sports History of Alachua County. According to Neilson, this exhibit was quite well-received and was also previously featured in the museum’s kiosk.

Jolie is a reporter for WUFT News who can be reached by calling 352-392-6397 or emailing news@wuft.org.
Previous The Point, March 23, 2021: ‘Watch It Happen’: Another University Avenue Development Is Rising In Gainesville
Next March 23, 2021: Morning News In 90