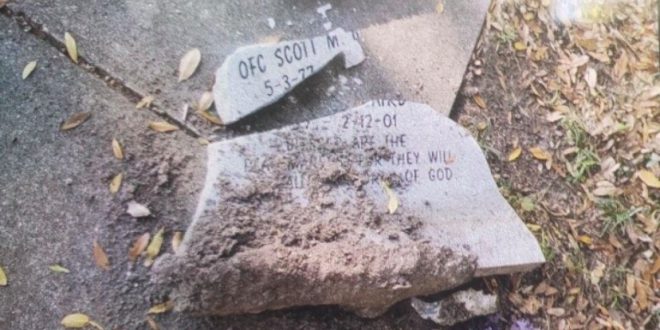 Vandals destroyed the marker a little over a week ago. (Photo courtesy of Buddy Baird)

The memorial dedicated to Gainesville police officer Scott Baird was destroyed, but a week later, it’s on its way back.

Baird was killed just over 20 years ago while trying to move a batting cage out of the road near Gainesville High School. A passing car hit the cage, which hit and fatally injured him. No one has ever been found responsible for putting the batting cage in the road.

The stone was placed on the 1800 block of Northwest 16th Terrace by neighbors a few years ago.

According to a press release from the Gainesville Police Department, they learned that the stone was destroyed last Friday. Baird’s brother, Buddy, quickly established a fundraiser to replace the stone. People donated over $5,000 — far surpassing the goal of $1,000. The funds will be spent on a new monument.

“With the generous donations we have received, we will soon be able to place a nice monument out there and maybe some solar lights to illuminate it at night. The final plans have not been completed yet,” Baird’s mother, GPD officer Kelly Gaudet, said in the press release.