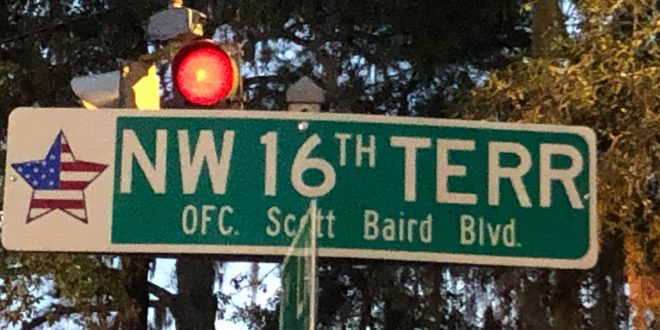 Gainesville city officials have since renamed the road behind Gainesville High School in honor of the police officer who was killed there. (Harold Ashley/WUFT News)

Gainesville Police Officer Scott Baird Was Killed 20 Years Ago, And His Mother Still Thinks Of Him Daily

It’s been 20 years since Gainesville police Officer Scott Baird was killed, and his mother is still in disbelief.

“I don’t know how I have lived 20 years without him, because I think about him every day,” Kelly Gaudet said of the loss of her oldest son. “I know that will never change.”

It was a foggy early Monday morning, Feb. 12, 2001, when Officer Baird was killed behind Gainesville High School.

“I have to stop and think, 20 years, how could that be?” said Gaudet, who is also a police officer. “It seemed like only yesterday he was at my house for dinner laying his head on my lap.”

The police department had gotten calls that morning of an object blocking the roadway. It was a batting cage, estimated to be around 500 pounds and suspected to have been put there by members of Gainesville High’s rival baseball team, Buchholz High School.

Baird, who was working the midnight shift, responded to the call and tried to move it himself.

It was too heavy.

He called his supervisors for help, and they contacted a tow company to help Baird, who was 23 years old.

While he waited, tragedy struck.

Ira Nathaniel Warren, then 17, was driving home after dropping his mother off at UF Health Shands Hospital, where she worked.

The heavy fog and flashing light from Baird’s cruiser distracted him from seeing the cage, and the officer flashing his flashlight warning him of the cage he would soon hit, Warren told Police.

Baird tried to run out of the way, but it was too late. Warren hit the cage, which struck Baird, fatally injuring him.

The scared teen then got out of the car and called his mother, who then called 911. Baird was rushed to the hospital where he died from his injuries.

“Never will I forget the day going to Shands with a bag packed, ready to be by his side for however long it would take,” Gaudet said Friday, with tears in her voice. “Never in a million years would I have been prepared for the words saying that Scott died.”

Jeff Blundell worked with Baird and was the lead detective on finding who was responsible for the cage being in the street. He said Baird was one of the people who, when he walked in a room, “you could tell, even if you didn’t see him, he just filled the room.”

Police have never identified a suspect in the batting cage moving but believe they know who did it. They just cannot find concrete evidence to prove it, which is something Blundell said is one of his biggest regrets in his almost 30-year career.

He reminisced on the times the two of them used to have coffee in the wee hours of the morning and described him as being very confident and ambitious with a big personality.

Baird was not just popular among fellow officers; the community loved him, too, as evidenced by local businesses once voting him their favorite officer.

Gainesville police Sgt. Tracy Fundenburg, who has been organizing the Baird remembrance events since 2002, remembers her former co-worker’s “infectious” personality.

“He had that magnetism, that humor, that laughter, that smile — that you just wanted to be around him — and you left being a better person because you know him,” she said. “He could make you laugh on your most down day.”

His mother said Baird was very motivated to further his career, saying she could see him today being in the FBI. That was his dream.

Harold is a reporter for WUFT News who can be reached by calling 352-392-6397 or emailing news@wuft.org.
Previous ‘It’s In Our Genes’: Gainesville Chinese Find Ways To Celebrate Lunar New Year During COVID-19
Next The Lede Special Edition || The Love Day Episode