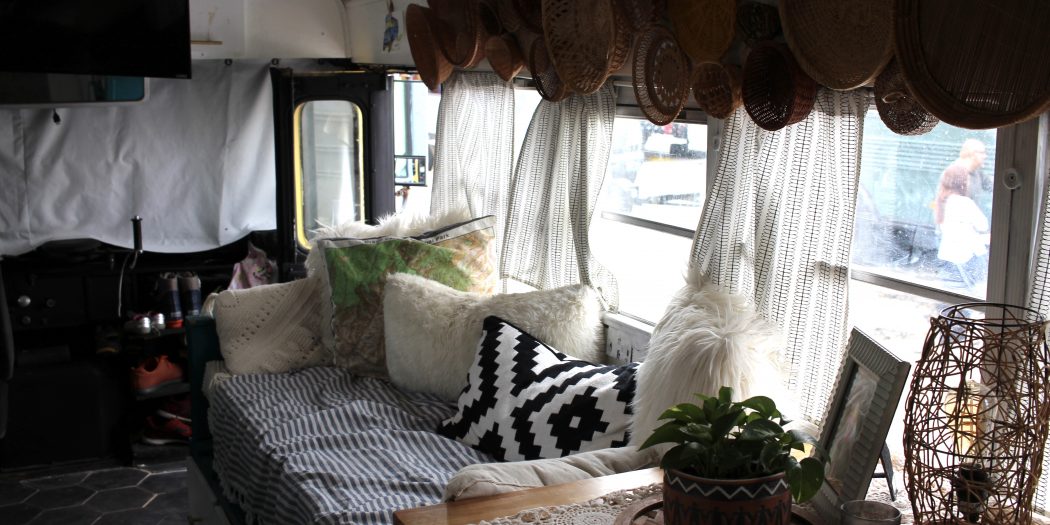 Hannah and Ian Hernandez are currently renovating their former school bus in preparation for the arrival of their next baby in June. (Julia Mitchem/WUFT News)

After adopting the motto “experiences over things,” Brian and Sherry Hamons went from working full time jobs to living in a school bus with their family and traveling all the time.

“The American Dream wasn’t cutting it for us,” said Sherry Hamons, 40, who teaches Chinese students English online through a Beijing company called VIPKid.

The Hamons family moved from their home in Cleveland, Tennessee, into a silver 40-foot-long, flat-nose bus they renovated, said Brian Hamons, 41, a former insurance agent. They live in the space that’s roughly 300 square feet inside with their four children, ages 7 to 17 years old.

“We’re not going without anything,” Brian Hamons said. “In fact, there are a number of amenities we didn’t have in our home back in Tennessee.”

The Hamons are one of many families who have created a home in vehicles such as a school bus, van or box truck. Theirs was among 46 vehicle-based homes showcased to the public at the Know H.O.W. Expo this weekend outside The Oaks Mall in Gainesville.

Known as skoolies, the school buses have all been renovated into tiny homes. The skoolie movement began in the ‘70s and continues to grow today, according to The Washington Post.

Michelle Mattson, 47, is an administrative specialist for a gas utility who lives in Anthony, Florida. She founded the exposition and created a community called the “Skoolie Swarm,” which is a group of tiny homes on wheels that meet up and camp together. The Gainesville event was intended to help other people build their own home on wheels, Mattson said.

“We just all just really wanted to have a place where we could help people learn about the lifestyle and what it takes to make it happen,” she said.

Partners Kayla Ross, 26, and Mariah Rivera, 23, traveled about five hours from Boynton Beach, Florida, to learn more about starting their own home on wheels.

A health coach and personal trainer who is a delivery driver on the side, Ross has always been into tiny living.

Rivera, a nanny and communications major at Palm Beach State College, said vans appeal to her because the freedom that comes with the lifestyle.

“Van life also has a really cool financial element,” she said. “It’s very low impact when it comes to your wallet.”

Mattson’s home on wheels journey began when planning a trip out West for her daughter’s high school graduation in 2017.

Her husband, Travis Mattson, 48, a permit manager for the Florida Department of Transportation, discovered by word of mouth that other people were converting school buses into homes. He bought a 1985 Chevy Bluebird short bus at a local schoolyard auction for $860, and they spent about $5,000 converting it into a home to travel with their daughter Hannah, 20, and son Parker, 18.

They left their home in Anthony in Marion County and spent 24 days during summer 2017 traveling through Texas, Colorado, California, Wyoming and Kansas.

“We never expected to still have it,” Michelle Mattson said. “We didn’t know there was a whole community of people living, traveling and building buses.”

Hannah Hernandez, 25, and Ian Hernandez, 27, live and travel with their 15-month-old daughter Nora Hernandez in the “Hanzian” bus with their dog Girlie. The family began renovating their former school bus about three years ago while living in Winter Springs near Orlando.

“The bus just kind of came about,” said Hannah Hernandez, a seamstress who owns her own online shops. “We liked it because buses are really safe structurally.”

Her favorite place they have traveled to in the bus so far: Niagara Falls this past summer.

The skoolie community brings together people from all over the United States. Rickey Irvin, 61, drove about 530 miles from Falkville, Alabama, to show his home on wheels at the exposition.

Irvin said he has two rare autoimmune diseases; he has had a stroke and a heart attack and is in his wheelchair 80% of the time. Yet Irvin said he built everything on his bus.

Many individuals live in a bus because it allows them to travel at a much lower cost and have more time to spend with their family. Brian and Sherry Hamons left behind everything and spent between $45,000 to $55,000 and countless hours renovating their home on wheels.

“It’s our dream that started on paper that we built with our own hands,” he said.

Julia is a reporter for WUFT News who can be reached by calling 352-392-6397 or emailing news@wuft.org.
Previous Vietnam Veterans Ride To Honor One Another At Second Annual Event
Next The Point, Feb. 3, 2020: Florida Could Become 27th State To Require Parental Consent For Abortions