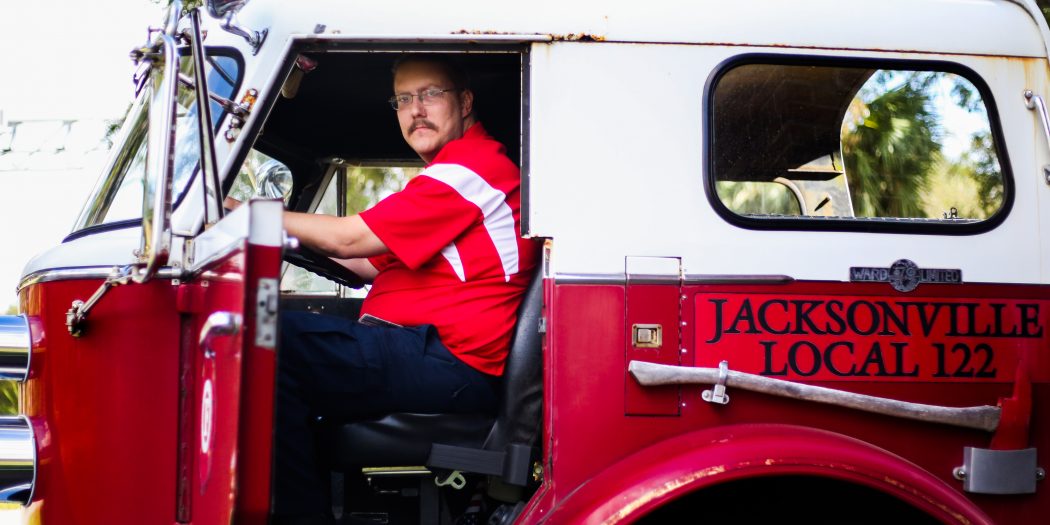 Brian Kernohan poses for a photo outside of Local 122 of the Jacksonville Association of Firefighters in Jacksonville, Florida on Wednesday, Jan. 15, 2020. (Chris Day/Fresh Take Florida)

When Brian Kernohan complained to his doctor of merciless headaches two summers ago, he expected to get a prescription for a sinus infection, not a diagnosis of brain cancer. The 37-year-old firefighter’s eardrums were curved inward, so his doctor suggested a CT scan.

It found a tumor the size of a golf ball sitting on his right cerebral artery, daring a stroke with every heartbeat.

“Not even 24 hours later,” Kernohan said, “they called me and said ‘get your rear into the hospital.’”

On Veteran’s Day 2018, the mass was surgically removed and found to be a medulloblastoma, one of the most common brain tumors for children. A year and a half later, earlier this month, Kernohan finished his final chemotherapy session. The husband and father of two young sons is now the first firefighter in Jacksonville to receive job compensation for his treatment under a new Florida law declaring cancer as a line-of-duty illness and outlining its accompanying benefits.

Under the law Gov. Ron DeSantis signed last year, firefighters diagnosed with one of the 21 designated cancer types after July 2019 receive $25,000 cash from their city employers and reimbursement for any out-of-pocket medical bills incurred while they work and within 10 years following their retirement.

To qualify, they must also have health insurance, have worked for at least five years with the same employer and have not used tobacco those five years.

The bill also awards line-of-duty death benefits to the families of firefighters who died of cancer.

Because Kernohan was diagnosed with cancer before the bill went into effect on July 1, he said, the city of Jacksonville is only reimbursing his medical bills and not paying him the $25,000.

Others around the state haven’t been so lucky.

Jason Francis, a 17-year veteran of the St. Petersburg fire department, said he had to sue the city to receive any benefits.

Francis, 44, was diagnosed with thyroid cancer in January 2019. He watched the bill make its way through the Legislature while he was undergoing surgery and radiation therapy.

The day it passed, he wrote his boss requesting compensation.

Six weeks went by with no response beyond an initial meeting. He took his request to court and won in December. The city of St. Petersburg is now giving him the full benefits under the law.

“Trust me,” Francis said, “I did not want to sue anybody, but there was no other way.”

He and his wife, April relied solely on her income for six months after he ran out of sick leave at the end of July. They now have financial help from the bill, Francis said, but more problems are appearing.

He hasn’t yet found the right balance of thyroid replacement drugs to keep him feeling healthy and able to return to work. The city said he has to pay tax on the $25,000 cash, which Francis considers tax-free injury compensation, not wages.

“We need to be sure that local governments in the state are going through with it,” Flores said.

Chief JoAnne Rice of Gainesville Fire Rescue said she’s grateful the bill passed and will help her colleagues and their families. Still, she said, it’s not a panacea.

“There is no way to get rid of the risk altogether,” Rice said.

When a building catches on fire, she said, any plastic furniture or belongings inside melt and release carcinogens — cancer-causing particles — into the air. They then contaminate firefighters’ gear, exposed skin and breath.

According to Centers for Disease Control and Prevention study findings from 2016, firefighters are 9% more likely to be diagnosed with cancer and 14% more likely to die from cancer than the overall U.S. population.

To minimize exposure, Rice said, some fire stations give each employee two sets of gear. When one gets dirty, the clean set can be worn while the other gets washed. However, since each set costs $3,000, Rice said, it’s expensive for city governments.

Particulate hoods are another helpful but expensive technology Rice mentioned. At over $100 per hood, they filter out smoke and carcinogens from firefighters’ air and headgear better than normal hoods, which are more permeable.

While fire stations hunt for the best preventions, employees and their families will keep fighting.

“The last year’s just been really crazy,” Kernohan said. “But I think attitude is more than 90% of your treatment.”

He and his family leave Monday on a celebratory cruise to the Bahamas, the firefighter said, now that he’s in recovery from his brain cancer. And in seven weeks, with his doctor’s approval, he’ll be back fighting fires once again.

Danielle is a reporter for WUFT News who can be reached by emailing news@wuft.org or calling 352-392-6397.
Previous Narcotics Dogs Stay on the Beat in Gainesville Despite Changed Laws
Next Charter Review Committee Votes To Dismiss Representation Proposal Despite Public Support 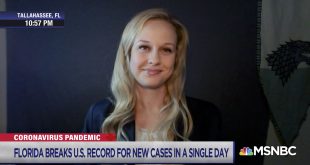 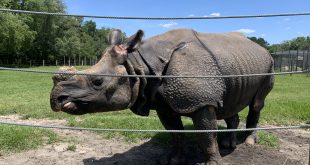 A father was suspected of killing his two young sons early Tuesday – including an 11-year-old who was regularly the batboy for the No. 10-ranked University of Florida baseball team – then killing himself before setting on fire his family’s waterfront vacation home in nearby Cross City, authorities said.