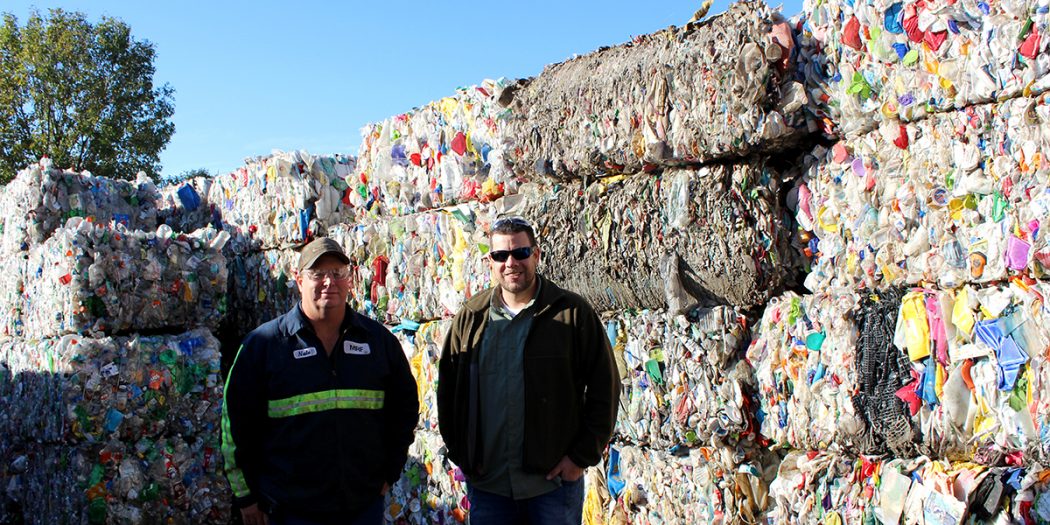 Instead of just aluminum cans, glass soda bottles and plastic milk jugs, Klugh, the county’s acting waste alternatives manager, said he and other recycling employees have seen printers, air conditioning units and even a car’s front bumper in the mix.

Alachua County had an overall recycling rate of 68% in 2018, ranking third-highest in Florida. But Klugh said the public waste department must continue to educate residents about what should and should not be recycled – especially since the market for recyclables is down.

It’s been five years since the market has thrived. However, Klugh said he’s been concerned about the industry since China stopped accepting recycling from the U.S. last year. Recycling facilities are now forced to look for domestic buyers instead of shipping millions of tons abroad.

“When China stopped taking materials, the mills that we do have here got overrun,” Klugh said. “Now, there’s no shortage of materials, so they’re not paying a lot for it.”

The competitive market puts recycling programs in danger of not making enough money to stay afloat. Klugh said that’s why the county emphasizes the importance of putting items in the correct bins: to keep contamination rates down and the value of recyclables high.

Gina Hawkins, executive director of Keep Alachua County Beautiful, said she doesn’t blame China for discontinuing the recycling trade. Instead, she blamed domestic contamination rates – caused by the poor sorting of recyclables – for the mess.

“It’s our fault,” Hawkins said. “We can’t reduce contamination or create domestic markets. We have no one to blame but ourselves for the soft markets.”

The executive director said these impacts are lessened in Alachua County because of its significantly lower contamination rates compared to the rest of the country. The county’s rate is nearly 10 percent, according to Klugh, while the national average is 25%.

What are you actually able to recycle? Here’s Alachua County’s guide.

With U.S. mills more selective about what they buy, Klugh said Alachua’s low contamination rates often make its recyclables first choice. He credits the lower rates to the county’s dual-stream system that separates plastic, metal, glass and cartons from cardboard and paper.

Renfroe said the system makes it easier for the recovery facility’s 21 workers to manually sort items. Two new mechanical additions also help the process, he said: a glass breaker for the plastics and glass stream, and an old corrugated cardboard screen for the paper stream.

But the ease can be costly. With county employees earning $14 an hour, sorting costs can go up to $100 a ton, “which is pretty up there,” Klugh said. That makes it harder to make a profit.

“You’ve got markets that are going down and the costs of processing is going up,” Renfroe said. “So at some point in time it’s going to quit being to the positive.”

The recovery facility, on 51st Street and Northeast 63rd Avenue, pumps out almost 100 bales of recyclables a day, he said. These bales are made from items of the same material being crushed together after being sorted. They can weigh between 1,200 and 1,400 pounds, he said.

While the county’s population has only grown by about 15,000 in the past five years, its waste output has nearly doubled. Documents from the public waste department revealed a total of 802,584 tons of municipal solid waste were produced in 2018.

However, less of that waste ended up in a landfill than in previous years. In 2013, 46.13% was landfilled. In 2018, it decreased to 30%, thanks to the county’s additional waste-to-energy combustion method starting several years before.

Despite this progress, recent pushes to increase county recycling efforts have been stifled. In August, a plastic ban was repealed nearly a month after it was established due to litigation threats. Gainesville’s similar ban met the same fate.

Recycling remains a hot topic statewide. State Sen. Kevin Rader, a Democrat representing parts of Palm Beach and Broward Counties, proposed a Florida Beverage Container Deposit Act that would set refund values for specific containers. The refunds would be 5 cents for each bottle or can between six and 24 fluid ounces; 10 cents for each one between 25 fluid ounces and a gallon.

The bill is pending a vote in the state Senate. While previous such attempts for higher deposit fees have failed, Rader cited in the bill a need for more recycling and less litter statewide as motivations for his proposal. These mantras align with Hawkins’ efforts within Keep Alachua County Beautiful, which hosts daily litter pick-ups with its over 5,500 volunteers.

Hawkins said each volunteer can fill two 20-pound bags during a single shift. Last year, the group collected over 630,000 pounds of litter and debris throughout the county, according to its 2018-19 Great American Cleanup Report — and more than half of that was recycled.

Cigarette butts, Hawkins said, are the No. 1 litter item plaguing the county; they are recycled through a litter prevention program. Fast-food containers and bags follow close behind, she said.