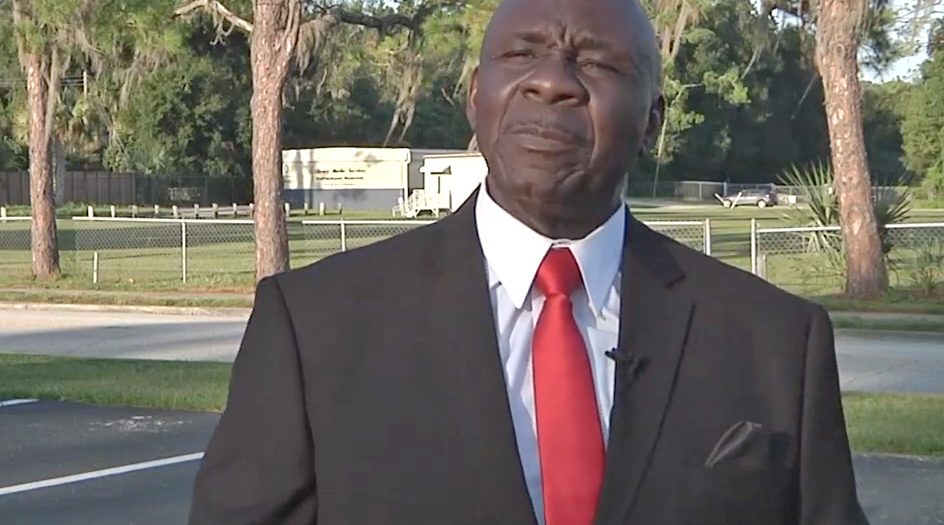 File photo of Tyrone E. Oliver, 63, of Ocala, from September 17, 2019. Oliver, who ran for city council, was forced into a runoff after a Sept. 17 election when none of the candidates earned more than 50% of the votes. He won last week’s runoff with 52%, ahead of rival Ire J. Bethea Sr. The councilman-elect acknowledged in an interview that he had been charged with drug felonies in 1986 but said the cases had been "handled," before directing further questions to the city attorney, Pat Gilligan. (Quan McWil/Fresh Take Florida)

By Angel Kennedy and Quan McWil

Those concerns might prevent him from serving on the council.

City Attorney Patrick Gilligan said he is investigating legal documents and will bring his findings to Tuesday’s council meeting.

“This is a unique circumstance in the course and history of a city election,” Gilligan said in the release. He said the confusion is connected to the passage of Amendment 4 in 2018, which sought to give felons who have served their sentences the right to vote. The release also states, “Background checks have never been a part of qualifying a candidate for city council.”

According to the city, qualification relies solely on candidates’ sworn affirmation of their own eligibility.

“All qualifying happens within the city. (My duty is to) ensure the conduct of the election,” Wilcox said.

One of Oliver’s would-be colleagues on the council has already made up his mind.

“There’s no question Mr. Oliver was convicted and so will not be seated next Tuesday,” City Council Member Matt Wardell said.

Original story, Nov. 26, 2019: The outcome of last week’s council election in Ocala was thrown into turmoil Tuesday amid a formal investigation by the city into whether the winning candidate might be ineligible to serve because of felony drug charges filed against him more than 33 years ago.

The councilman-elect, Tyrone E. Oliver, 63, acknowledged in an interview that he had been charged with drug felonies in 1986 but said the cases had been “handled,” before directing further questions to the city attorney, Pat Gilligan.

Under Florida’s constitution, ex-felons generally can’t hold office until they successfully appeal to the state’s clemency board to restore their civil rights or are pardoned.

Gilligan said Oliver genuinely believed he was eligible to run. He said attorneys were reviewing election rules and contemporaneous circuit court records to determine whether Oliver was ever formally convicted on any of the felony charges, which could affect Oliver’s qualification for office.

Prosecutors apparently declined to pursue at least some of the drug charges, and a judge withheld adjudication in at least some of the other cases in the 1980s. No one with Oliver’s name and date of birth is on the Florida Department of Corrections list of inmates either serving or ever released from state prisons.

Gilligan said he expected the legal review to conclude by Wednesday afternoon. Ocala is in north central Florida, northwest of Orlando. By late Tuesday, the city was redirecting all calls about its election to the Marion County supervisor of elections.

Oliver, who had never previously run for office, is a chaplain at Deliverance Outreach Ministries of Ocala. He spent $19,249 to win the election, mostly on campaign signs, mailing materials and recorded telephone calls. The four-year council seat represents citizens in the northwest part of the city.

Gilligan noted that Oliver has had a pending request for many months before Florida’s Board of Executive Clemency, which meets four times each year to decide whether to restore the civil rights of most ex-felons who have completed their prison sentences and paid any fines or restitution.

The mayor, Kent Guinn, said the situation was being resolved but did not explain further. The city attorney said possible options the city was exploring – if Oliver were declared ineligible – included conducting entirely new elections for the council seat.

Oliver was forced into a runoff after a Sept. 17 election when none of the candidates earned more than 50% of the votes. He won last week’s runoff with 52%, ahead of rival Ire J. Bethea Sr. Low turnout meant Oliver defeated Bethea by only 124 votes.

Bethea was unaware of the legal review until a reporter contacted him. He said he would run again if there is a special election.

The reports about Oliver’s criminal charges surfaced Monday in a local Facebook group. Sue Mosley, who lives outside the city in Marion County, said she heard from someone she would not identify that the city attorney was reviewing Oliver’s qualification for office.

“What’s fair is fair,” said Mosley, who compared herself on Facebook to an investigative journalist. “Why is it okay for anyone else to just get away with it?”

The political mess in Ocala emerged as WUFT separately reported that a town council candidate, also in Marion County, ran unsuccessfully earlier this month despite serving 16 months in prison on felony theft and burglary charges 44 years ago in North Carolina.

That candidate, Samuel David Jones, 66, of McIntosh lost a town council special election Nov. 5. His little-noticed political campaign – and the fact that he also had voted in Florida in 2018 – exposed divisions in Florida about whether ex-felons can be elected without going through the governor’s clemency process or receiving a pardon.

Jones never mentioned his criminal history to voters ahead of this year’s election and said he never planned to disclose this part of his past. His felony convictions in July 1975 were discovered during an exercise on investigating candidates in a political journalism course at the nearby University of Florida.

The Marion County elections supervisor, Wesley Wilcox, said Jones could have run legally after voters approved a constitutional amendment last year allowing ex-felons to vote without a pardon or clemency. Wilcox after publication of this story said due to the complexity of Jones’ case in McIntosh, he was uncertain whether Amendment 4’s passage and Jones’ restoration of rights in North Carolina created a legal discrepancy enabling the ex-felon legally to run for office in McIntosh. Wilcox, who is not a lawyer, said he would refer the case to the Florida Department of State or Florida’s attorney general for an official ruling.

Gov. Ron DeSantis, who votes on the clemency board, has called it “curious” that last year’s Amendment 4 did not additionally allow non-violent ex-felons to run for office or serve on juries, and said he was considering doing that himself.

This story was produced for Fresh Take Florida, a news service of the University of Florida College of Journalism and Communications. You can contact Quan McWil at q.nguyen@ufl.edu and Angel Kennedy at angel.kennedy@ufl.edu.

Angel is a reporter with WUFT News and the Production Manager for GHQ – a top-40 radio station based out of the University of Florida. Angel can be reached at 813-810-6742 or by emailing angel.kennedy@ufl.edu.
@mrkennedya
Previous Pasco Deputy Fired Over Accidental Gun Discharge Fighting To Keep His Job
Next Chinese Schools In Gainesville Help Children Connect With Their Heritage