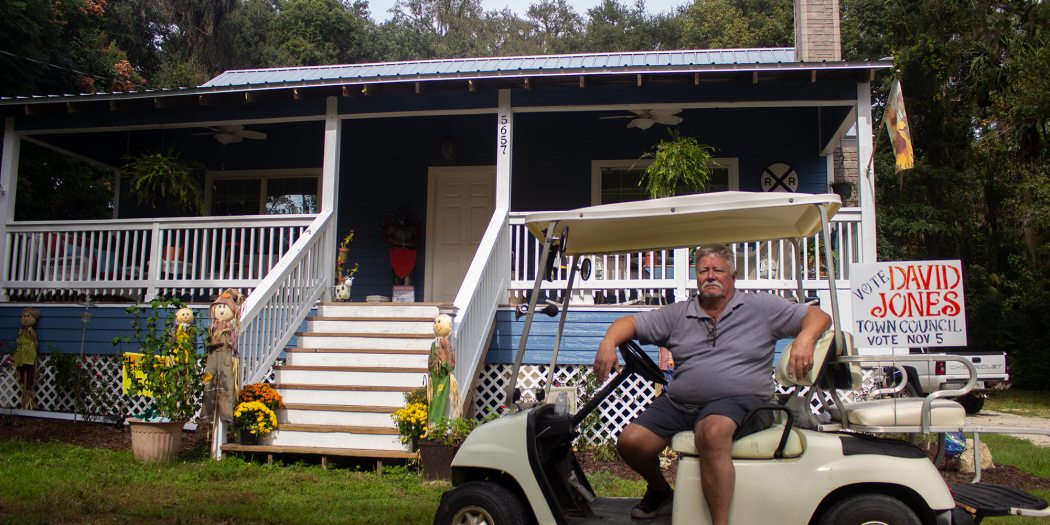 David Jones, an ex-felon who ran unsuccessfully for town council in McIntosh, Florida, sits on a golf cart outside his home Nov. 4, 2019, after speaking with neighbors about his candidacy. The race exposed divisions in Florida about whether ex-felons can be elected without going through the governor’s clemency process or receiving a pardon. (Angel Kennedy/WUFT News)

Nobody Noticed An Ex-Felon In Florida Ran For Office; Now There Are Questions Whether It Was Legal

A retired handyman who served 16 months in prison quietly ran for public office earlier this month in a small town, exposing divisions in Florida about whether ex-felons can be elected without going through the governor’s clemency process or receiving a pardon.

Samuel David Jones, 66, of McIntosh – a tiny community between Gainesville and Ocala in north central Florida – lost a town council special election Nov. 5 with 23% of the vote. Only 36 of 159 voters chose Jones, who finished third in the race.

Jones spent 491 days in a North Carolina prison until February 1980 on felony burglary and theft charges. He never mentioned his criminal history to voters ahead of this year’s election, despite publishing campaign videos on a local Facebook group, and said he never planned to disclose this part of his past. His felony convictions in July 1975 – more than 44 years ago – were discovered during an exercise on investigating candidates in a political journalism course at the University of Florida.

“Since it was a local, small-time election, I didn’t feel like it was anyone’s business,” said Jones, who was convicted four days before he turned 22. “People are different – what you are as a kid is not necessarily what you grow up to be.”

Jones’ little-noticed political campaign – and the fact that he also had voted in Florida in 2018 – inadvertently pushed the legal limits on Florida’s civil rights debate over freedoms for people who have completed their sentences for felony crimes and want to participate again in American society.

Florida voters last year approved Amendment 4 to the state’s constitution, restoring the rights of most ex-felons to vote without permission from the clemency board. But the Florida Office of Executive Clemency said people with felony convictions were still required to successfully appeal to the board before they can run for office: “Only the right to vote, not the right to sit on a jury or the right to hold public office, is contemplated by the amendment,” the board said in a statement.

Gov. Ron DeSantis, who votes on the clemency board, has called it “curious” that Amendment 4 did not additionally allow non-violent ex-felons to run for office or serve on juries, and said he was considering doing that himself.

Jones acknowledged he has never asked Florida’s clemency board to restore his civil rights and said no one warned him he might be ineligible to run. He signed a candidate oath with the Marion County supervisor of elections affirming he was qualified. A copy of the paperwork showed that Jones filled out the form in block letters and signed it.

The president of the Florida Association of Supervisors of Elections, Tammy Jones, said it was the candidates’ responsibility to know whether he was legally eligible. “It is not the supervisor or the qualifying officer’s job to make sure the candidate is aware of those laws,” said Jones, the elections supervisor in neighboring Levy County and who is not related to candidate Jones.

A spokesman for the Florida Division of Elections, David Frady, said candidates swear they are eligible, and “it would be against Florida law to falsify any voter registration documents.” He said elections could be contested afterward if such ex-felons win.

But Wesley Wilcox, the elections supervisor in Marion County – where Jones ran for office – said Amendment 4 implicitly restored the “qualified elector” status for ex-felons, enabling them to hold public office in Florida without having to seek permission from the governor and other clemency board members.

“If you go and look at any candidate portions of the state’s statutes, there is no change requiring the restored qualified electors seek clemency,” Wilcox said.

He said even though the clemency board’s rules require ex-felons to seek clemency prior to running for office, there is no Florida statute legally binding the board’s requirement as law.

The president of the elections supervisors association agreed.

“The [clemency rules] don’t quote statutes or anything – it’s just a document that the clemency board has typed up,” she said. “But without referring to a particular statute, it’s difficult [for the board] to legally bind its guidelines.”

Wilcox said he and the Marion County State Attorney’s Office would not press legal charges against Jones for running for office.

The map above shows which states automatically restore ex-felon voting rights. (Data provided by National Conference of State Legislatures and The Restoration of Rights Project)

Jones, who lived previously in Pleasant Garden, North Carolina, and worked in construction, was one of three candidates running to fill the seat of a former McIntosh councilman who had died in August. He said he had been interested in serving on the town council since moving in 2015.

Ex-felons in North Carolina can vote or hold office after completing their criminal sentences. Jones said he registered to vote there in 1994, and voted regularly until he moved in 2015 to Florida – where rules for ex-felons are different.

Jones acknowledged that he registered to vote in Marion County in February 2018 and voted in last year’s elections, which included the same constitutional amendment restoring the voting rights of ex-felons like him. His voter registration form required him to affirm he had never been convicted of a felony or, if he had, that his rights had been restored.

The form said submitting false information is a third-degree felony with penalties up to five years in prison and a $5,000 fine.

“I just thought I could vote,” Jones said. “I was able to in North Carolina, so I just figured I was eligible.”

The director for Florida’s Division of Elections, Maria Matthews, said for felons convicted outside Florida, the laws of the state where they were convicted govern how or when they can vote again – meaning Jones was clear after he served his time in North Carolina.

“Any [false information] case starts with intent,” Simpson said. “If no individual in North Carolina or Florida informed Jones of the limitations on his restoration of rights, his intent to vote legally in Florida without knowledge of the clemency process is a built-in defense that’s hard to overturn in the state.”

In the town of McIntosh, known for antique shops and fishing holes, Jones took his election day defeat in stride, despite questions about whether he ever was a legal candidate. He said he plans to run again for town council as early as next year.

This story was produced for Fresh Take Florida, a news service of the University of Florida College of Journalism and Communications. You can contact Angel Kennedy at angel.kennedy@ufl.edu.

Angel is a reporter with WUFT News and the Production Manager for GHQ – a top-40 radio station based out of the University of Florida. Angel can be reached at 813-810-6742 or by emailing angel.kennedy@ufl.edu.
@mrkennedya
Previous Afternoon News In 90: Nov. 25, 2019
Next The Point, Nov. 26, 2019: A McIntosh Town Council Candidate Might Have Been The First Ex-Felon To Run For Office In Florida