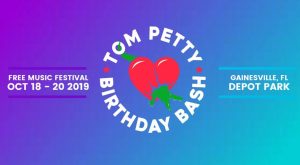 From the archives, April 2017: six months after Glenn Richards’ conversation with Jason Hedges about his band’s debut album (Mixed Signals by Hedges), Jason (also frontman of the Petty tribute band, Heavy Petty) would be organizing a concert to celebrate the life and music of Gainesville’s Tom Petty, who passed away unexpectedly on October 2nd.

Two years later, that original event – held over what would have been Petty’s 67th birthday – has grown into the Tom Petty Birthday Weekend featuring multiple events across the city including five Petty-themed craft beer launches (at First Magnitude and Swamp Head), bus tours of Petty-related sites, storytellers, rock memorabilia, fireworks, murals, a sing-a-long, and, of course, music. In fact, two music festivals: the Tom Petty Weekend at Heartwood Soundstage (October 17-19) and the Tom Petty Birthday Bash at Depot Park (October 18-20).

Brand new parents, Jason and his wife, Sarah Hedges, are behind the free Tom Petty Birthday Bash, presented by Columbia Care. Although attendance is free, various ticket packages and merchandise are available for purchase and the proceeds benefit the UF Health Shands Arts in Medicine program which uses the arts to transform the health experience and provides leadership for arts in health programs throughout the US and abroad. Jason is a Musician in Residence with the UF Health Shands Arts in Medicine program and believes in the healing power of music, spending his days playing bedsides for patients.

This quote by Tom Petty leads off the “About” page at the Tom Petty Birthday Bash website: “Music is probably the only real magic I have encountered in my life. There’s not some trick involved with it. It’s pure and it’s real. It moves, it heals, it communicates and does all these incredible things.”

Glenn Richards is Operations Coordinator and local host for Morning Edition on WUFT-FM. His background includes 30+ years of radio in South Florida as an air personality, promotion director, and morning show producer (WSHE, WZTA, & WFLC). His previous education includes a Bachelor of Science in Communication from the University of Miami where he was also general manager of WVUM-FM. Upon his arrival in Gainesville in 2006 to pursue a telecommunication master’s degree at the University of Florida College of Journalism and Communications, he worked as an air personality at WRUF-FM (both Rock104 and Country 103.7 The Gator). One of Glenn’s passions is local music. Since 1990, he has produced and hosted local music programs in both South Florida and Gainesville, playing demos and independent releases from unsigned artists, many of whom went on to national prominence including: Marilyn Manson, Sister Hazel, For Squirrels, Matchbox 20, Saigon Kick, Mary Karlzen, Nil Lara, Hundred Waters, and more.
Previous The Point, Oct. 16, 2019: There’s A Disturbing Trend In Alachua County High School Math Scores
Next Police Captain Angela Scroble Graduates From The 22nd Senior Leadership Program