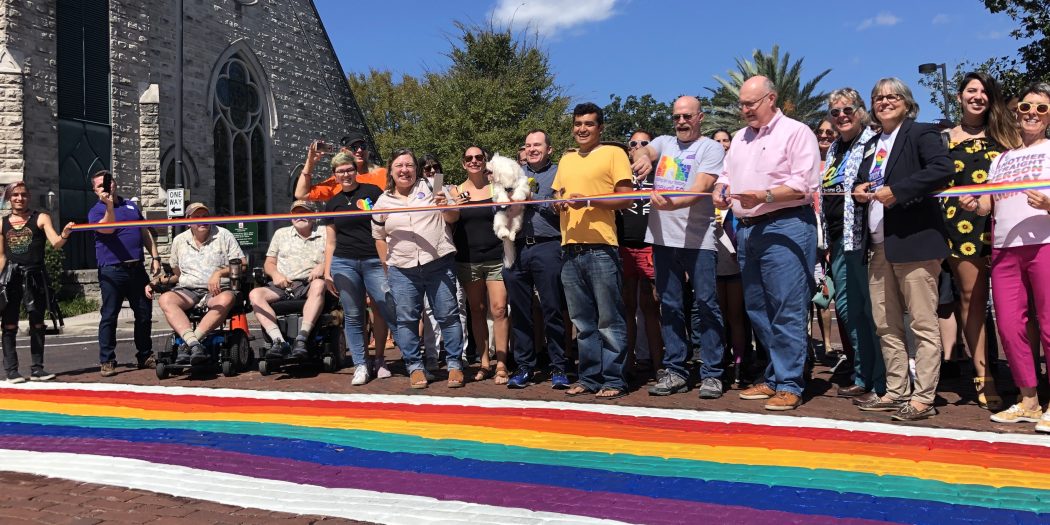 A group of local residents and students stand behind Gainesville city and community leaders as they cut the ribbon announcing the three rainbow crosswalks that were installed for National Coming Out Day. The crosswalk in front of them is located at the corner of NE 1st Street and NE 1st Ave in downtown Gainesville. (Lia DiPaolo/WUFT News)

Below: Hear a version of this story that aired on 89.1 WUFT-FM.

After the roar of laughter died down, Schuyler Bailar concluded his presentation with a statement that left the whole room snapping their fingers in approval on Friday.

“My grandmother is the only person in my family that didn’t misgender me,” Bailar said.

Schuyler Bailar was this year’s Pride History Week Keynote Speaker at the University of Florida. Bailar became the first transgender athlete to compete in any sport on a NCAA Division I men’s team when he did so at Harvard.

A crowd of about 60 people listened to the internationally celebrated speaker present his story on how he came out as transgender. Bailar’s coming out story was the culmination of an entire day of festivities held at UF and in downtown Gainesville.

Between crosswalks being painted rainbow, tabling events, comedy shows, and group conversations, organizations such as Pride Student Union, Reitz Programming Board and Pride Community Center of North Central Florida helped to fill Gainesville with energy and support for the LGBTQ+ community.

Bailar talked about how he officially came out on Facebook and felt the need to block his grandmother from the post in fear of her judgment. After reading aloud his own coming out letter to her, she cried out, “I knew that!” and openly accepted him from that point on.

Bailar talked about all the moments that led to the realization that he was transgender. He shared his struggles during his childhood growing up, how he was depressed in high school, and how he transitioned into competing for the men’s swimming team at Harvard.

“Your identity never has to rob you of your passions,” he said.

“Anticipating what his family would say really hit home for me,” said Morgan Averette, a first-year sociology graduate student.

Earlier in the day, more discussion about coming out was held in the Reitz Student Union.

LGBTQ Affairs at UF hosted conversations with guest speaker Remus Jackson about what it means to come out, how to cope with potential invalidation, survival skills to help with self-validation, nonconformity and more.

Jackson, a transgender graduate student in UF’s English program, said he came out as queer at 14. He said that coming out to family members was the biggest challenge.

“Sometimes the most supportive parents are the most scared,” Jackson said.

The room of around 30 students talked about the realization moments they’ve experienced or what Jackson refers to as “egg moments” or “aha moments.”

For Jackson, he said it was when he watched drag races.

“I am a guy…I’m just a guy who is feminine,” he said. But there was a lot of difficulty in figuring this out as a child, he said. “Identity is not a stable or fixed category you can put in your Instagram bio,” Jackson said.

Jackson said that it is OK to shift your label as needed for your audience. One does not need to be a single letter represented in “LGBTQ” or need one word to feel validated, he said.

Logan Nessar, a second-year women’s studies graduate student, said the main purpose for these conversations was to mitigate the pressures and focus more on the realities of what it means to come out.

“It’s a really important day, but we have to remember that queer people come out every day of their lives,” Nessar said.

“It turns my identity into a spectacle,” Ash Joseph, 19, a second-year mechanical and aerospace engineering major, said.

The show of support for the LGBTQ+ community on National Pride Day didn’t end on campus.

There was a ribbon-cutting ceremony at 1 p.m. at the corner of NE 1st Street and NE 1st Avenue introducing the installment of three rainbow-painted crosswalks in downtown Gainesville.

The Pride Community Center of North Central Florida (PCCNCF) requested that the city kick off the Art in Crosswalks program with the rainbow designs to celebrate the diversity of Gainesville and recognize the importance of the LGBTQ+ community.

“We’re celebrating the importance of coming out,” the center’s co-president Terry Fleming said. “This show of support is empowering. It lets people know that they are welcome and supported by the community, which could literally save lives.”

Fleming thanked city commissioners and introduced one of them, Harvey Ward.

“In Gainesville when we say, ‘all are welcome,’ we really do mean all of y’all,” he said. Ward said he was proud to be a part of an event like Friday’s, just before he stood behind the crosswalk and cut the ribbon.

Lambert and her wife Pam Paris, 66, have lived in northwest Gainesville for around 40 years. They came out to the ribbon-cutting ceremony and said how proud they are to be a part of Gainesville where they are supported in this way.

Gainesville’s Public Works Department was working on the crosswalks over the past four days. They are expected to last for three to five years.

Lia is a reporter for WUFT News who can be reached by calling 352-392-6397 or emailing news@wuft.org.
Previous Florida Standards Listening Tour Stops By Alachua County
Next The Point, Oct. 14, 2019: Rainbow Crosswalks, Keynote Speakers And More In Gainesville Mark National Coming Out Day