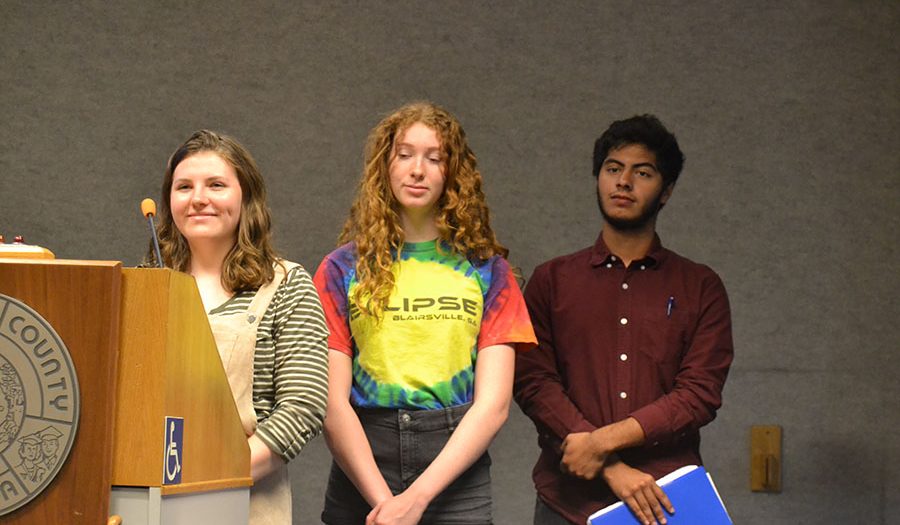 (Left to right) Elizabeth Walker, Makena Lang and Ivan Landaeta prepare to give their speeches to the Alachua County Board of County Commissioners on Tuesday, June 25. (Eve Rosen/WUFT News)

A group of young people spoke in front of the Alachua County Commission on Tuesday in order to fight in opposition to a proposed phosphate mine in southeastern Union County and in western Bradford County.

HPS Enterprises is the company behind the HPS II phosphate mining project. It is made up of four families who are seeking a permit in order to mine. The company is planning to mine 2.3% of the land in Union County and 1.75% of the land in Bradford. The proposed site is over 5,000 acres of property by New River, which is part of the Santa Fe River. New River forms the border between Union and Bradford County.

“A large majority of the public in both those counties oppose the phosphate mine,” said 18-year-old Emma Turner of the Young Leaders for Wild Florida. The group previously spoke to county commissioners in both Bradford and Gilchrist counties.  The Santa Fe River runs through Gilchrist, and the Young Leaders group believes local government there should take an interest in stopping a mine in nearby counties. Alachua County commissioners made for a more receptive audience than the commissions in those counties, the group said.

The group made statements to the commissioners about how phosphate mining can pose a threat to the Santa Fe River and the ecosystem. Phosphate mining has been linking to radon and radium, known carcinogens. Radon is the second leading cause of lung cancer in the United States. In 2017, a story by Action News Jax showed Union County has the nation’s highest death rate from lung cancer.

In addition to its connection with carcinogens, the group said mining is also a source of pollution, toxic algal blooms, and can endanger wildlife that lives nearby.

The biproducts of the mine that run downstream can create algal blooms, which can be toxic to both humans and animals.

“As the Sunshine State, I wish to preserve all this for our future and for our next generations, even beyond me and beyond my future children,” Ivan Landaeta said.

The mine will straddle the New River, which leads into the Santa Fe River. In doing so, a wetland will be displaced, which can contaminate the water and lower its quality.

“We deserve to enjoy clean drinking water and land to live on just like our parents and grandparents did,” Elizabeth Walker said to the commissioners.

Everitt is a reporter for WUFT News who can be reached by emailing news@wuft.org or calling 352-392-6397.
Previous The Point, June 25, 2019: Crime Increased In Alachua County In 2018, FDLE Report Shows
Next The Point, June 26, 2019: What Questions Do You Have About Climate Change’s Effects Where You Live?