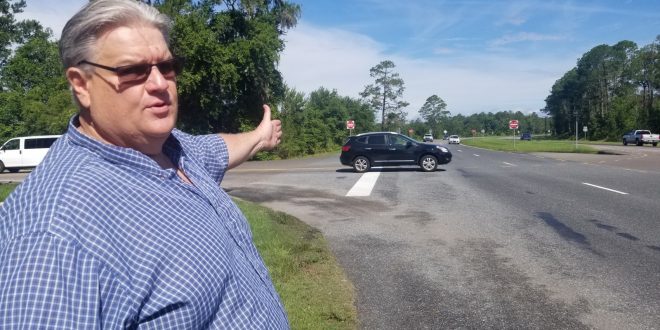 On Mother’s Day of 2018, Jeffrey Delong Jr. rode his motorcycle, with fiance in tow, southbound on U.S. Route 441 through the intersection of County Road 234. Delong was killed seconds later after crashing into another vehicle, according to a Florida Highway Patrol report.

“Everyone else’s lives moved on, but mine will never move on,” said Delong’s mother, Michelle Barrus, “I don’t want another family to go through what we’ve gone through. It’s literally been a nightmare.”

“I hate to say it, but (the community) has become numb to it,” said Micanopy town commissioner Mike Roberts. “I just felt like somebody had to step up and start making phone calls.”

“I gave them a lot of ideas I had,” said Roberts. “But they’re the experts, not me obviously.”

Roberts pushed for accommodations including flashing yellow caution lights, installed in April, moving the stop sign for eastbound drivers closer to the intersection to increase the visibility of southbound drivers and adding a flashing red light to the stop sign.

The intersection is a hotbed for travelers headed to the Interstate 75 exit located about a mile and a half west down County Road 234. While the speed limit on most of U.S. 441 is 65 mph, the area surrounding the intersection had a reduced speed limit of 55 mph, until Roberts made a call.

While Micanopy does not have a law enforcement department of its own, Roberts said Florida Highway Patrol “has done a great job” enforcing the new traffic patterns.

“They’re stopping people. A lot of it is getting people to realize the severity of the situation,” Roberts said. “In fact, I got stopped there the other day. I didn’t come to a complete stop and I got pulled over.”

Troy Roberts, public information spokesman for FDOT, said the additions to the intersection have shown improvement based on frequent patrolling of the area.

“It seems like they’re working to an extent. We’re looking at a more permanent fix,” said Troy Roberts.

A major resurfacing project of U.S. 441 is tentatively scheduled for 2021. While a timeline for the completion of the traffic study was unavailable, FDOT tends to combine major projects, such as intersection improvements and resurfacing, according to Roberts.

Some residents feel that while the reduced speed limit and flashing lights may be helping, there is only one solution to eliminate the problem.

“We need a traffic light,” said Carl Haskins, a Micanopy resident of 31 years. “Nobody obeys the speed limit. They all primarily stick with 65 the whole way.”

Monica Fowler has driven through the intersection twice daily for 39 years on her way to and from work at Delectable Collectables, her antique shop in Micanopy.

“We have a great concern about that area. It’s very dangerous,” Fowler said. “I really think to eliminate the issues, we need a light.”

“The problem is people don’t stop there,” said Barrus. “Personally, my belief: Nothing less than a traffic light.”

Rachael Schirmer is a general assignment reporter for WUFT. She can be reached at news@wuft.org or (352)294-6397
Previous Newberry Draft Of City Charter Shifts Roles For Mayor, City Manager
Next Gainesville Chapter Of Moms Demand Action Group Hosts Meeting About Gun Crime Increase