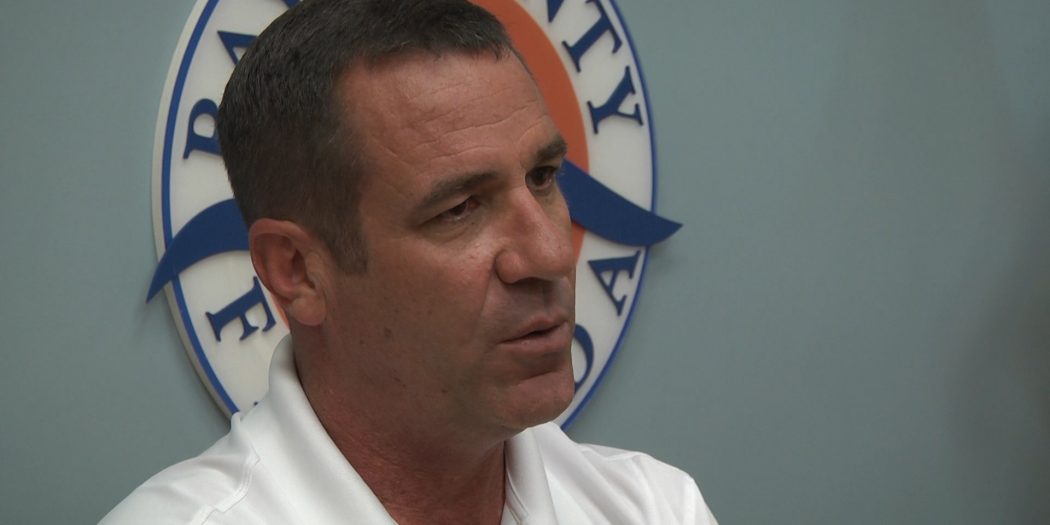 Bay County Commissioner Philip "Griff" Griffitts expresses his frustration with state and federal government officials for their lack of attention in addressing the county's concerns after Hurricane Michael. Griffitts invited to fly a congressman down to Bay County to witness the storm's devastation firsthand. (Rachel Rhodes / WUFT News)

Uncertain Future: A County’s Road To Recovery Amid Little Assistance

By Angel Kennedy and Madi Spector

Six months after Hurricane Michael struck the Florida Panhandle, regional politicians and community leaders find themselves pulling the weight of recovery efforts without assistance from state and federal government resources.

“We’re always a community that’s never really asked for help, but we need some help federally and from the state level to combat some of this financial issue we’re going to face,” Griffitts said. “We’re going to face kind of a financial crisis in 2020 if we don’t get some help.”

However, Griffitts said it seems the rest of the country has lost interest in the county’s struggles.

“The recovery effort is still going on as we speak,” Griffitts said. “We do feel like we have been forgotten on some scale.”

To combat the storm’s devastation, Doorways of Northwest Florida, which helps families find available housing in affected regions, has increased the number of families they’re assisting from 1,500 before the storm to 4,000 after.

“We’re still all here and in this together,” Shaffer said. “Things are gradually getting back together, but we’re all still here working on it.”

After that date, 250 households were left still seeking permanent housing and without FEMA assistance.

The county and state have asked for an extension of the TSA’s deadline twice, both in February and March respectively. FEMA granted the 60-day extension two weeks ago, with a new end date of June 8. Forty-two households currently qualify for the extension.

Griffitts said that number was unacceptable.

Skinner said FEMA’s funds are limited and referred to the agency’s programs as a “hand up and not a hand out.”  Federal guidelines limit how much assistance the organization can provide, he said, although individuals and families coming out of the TSA program may continue to receive rental assistance through FEMA.

The commissioner said county officials fight with FEMA every day on behalf of their citizens, and he hopes the organization will reconsider the number of qualified households to continue in the program. Applicants who wish to seek an extension with FEMA must provide a long-term, practical housing plan in order qualify.

Griffitts, who said he feels that government entities and humanitarian organizations have forgotten about the Panhandle, blames subsequent disasters and events, including the Pittsburgh synagogue shooting and California wildfires, for taking national attention away from the Michael’s destruction in the Panhandle. He said county officials have spoken with members from Florida’s House and Senate and are considering a future trip to Washington D.C. to lobby for more relief funding.

“We need help,” Griffitts said. “We’re a small, little piece of the world. The cost is exponential.”

Damages from Hurricane Michael total nearly double the county’s $350 million budget. Since the storm, the county has borrowed more than $250 million from FEMA to assist in recovery efforts and have spent between $135 million and $150 million so far.

Although FEMA can reimburse affected regions for money they spend on recovery, Griffitts said, the reimbursement process can take up to years before regions receive funds.

Hospitals in the area were closed during the storm and could not admit patients, instead shipping them out to outlying areas such as Pensacola, Forth Worth and Atlanta. Despite area hospitals reopening, Griffitts said these facilities have laid off about 600 doctors, nurses and other workers.

Mexico Beach, one of the most devastated towns, faces a long haul to recover from the storm’s destruction. The debris bill is estimated to be $60 million; the town’s annual budget is only $3 million, said Mayor Al Cathey.

In 2017, the federal government passed a disaster relief bill allocating $174 billion for Puerto Rico, Texas, Florida and other areas hit by natural disasters. In 2018, Congress has provided no such funding.

“If they don’t get some sort of federal or state help, it could bankrupt (Mexico Beach),” Griffitts said. “[Washington] D.C. needs to figure that out. Stop the bickering and talk about the relief bill and about the three disaster areas. It’s not that hard.”

Gainer, a former Bay County commissioner, lives in Panama City and experienced the storm firsthand, Griffitts said. While supporting the efforts Gainer and his fellow congressmen have made in pushing the bill forward, Griffitts has criticized state and national government officials for their slow response in addressing the areas affected by the hurricane.

“I’ll fly [a congressman] down here; I’ll pay for it out of my pocket to fly a congressman if he wants to see [the damage],” Griffitts said. “Come on down, and I’ll take you on a tour six months later and show you what devastation looks like.”

Despite feeling as if Bay County has been forgotten, Griffitts commended the community’s efforts, adding that he is interested in seeing how the county fares in the next six months.

“It’s a purgatory somewhere between heaven and hell,” Griffitts said. “We are fighting every day.”

Angel is a reporter with WUFT News and the Production Manager for GHQ – a top-40 radio station based out of the University of Florida. Angel can be reached at 813-810-6742 or by emailing angel.kennedy@ufl.edu.
@mrkennedya
Previous The First Arts Academy Designed For East Gainesville Students Coming This Fall
Next April 18, 2019: Morning News In 90