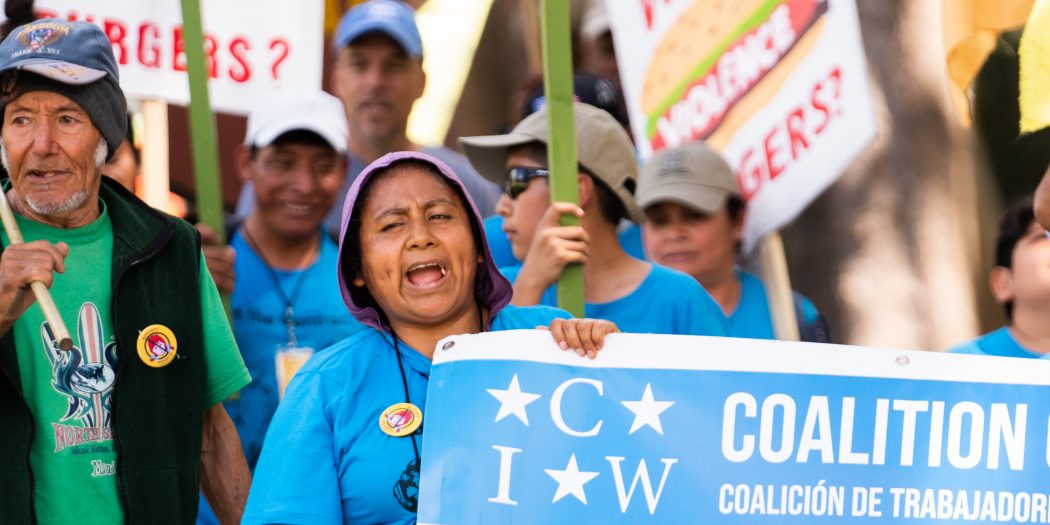 Antonia Rios chants with protestors from the front of the pack. The Mexico native says that workers don't get paid for the hours they spend waiting for — and traveling in — the bus that takes them to work. Rios moved to the United States in 1999 and began picking tomatoes in 2002; she also works as a volunteer at her daughters' school. (Photos by Justin Bright/WUFT News)

Wake up at 4 a.m. Pick tomatoes for nine hours in the sun. Return home after 6 p.m. on the bus that drove you an hour — sometimes more — to and from work.

This is a normal day in the life of Antonia Rios, a farmworker living in Immokalee, Florida.

Her workday is grueling, but it doesn’t include verbal abuse, low wages or forced labor. This is thanks to the Fair Food Program, an agreement created by the Coalition of Immokalee Workers to ensure that growers and corporations provide safe and fair working conditions for its farmworkers.

On Thursday, about 200 people representing the Coalition held a demonstration at the University of Florida to demand that the university end its contract with Wendy’s. The fast-food chain is one of the few in the industry that has not joined the Fair Food Program. An additional 200 students and supporters joined the Coalition for the demonstration.

Rios, 45, was on the front line of the march. She helped lead protestors from Norman Field to the Reitz Union — where one of the two on-campus Wendy’s is located — before finishing in front of the university’s administrative building, Tigert Hall. There, speakers urged president Kent Fuchs, who was in Tallahassee, to terminate UF’s contract with Wendy’s.

Wendy’s has five locations in Gainesville, two of which are located at UF.

“If this university wants to make it to the top five, they need to listen to us,” said Billy Hackett, a UF undergraduate who helped organize “Boot the Braids,” a student movement against Wendy’s. “They cannot ignore us any longer. This is about doing the right thing.”

The Gainesville City Commission unanimously passed a resolution Mar. 7 urging Wendy’s to join the Fair Food Program and for UF to cut its ties with the company.

Through the Fair Food Program, the Coalition demands that corporations pay an additional penny per pound of tomatoes picked. The money collected is distributed among workers to increase wages. Since the program’s beginning in 2011, $15 million has been added to the payroll of participating growers.

Workers also have access to a bilingual 24-hour hotline where they can file complaints to the Fair Food Standards Council, the independent monitoring organization of the program. The Council conducts random audits on growers to verify that they are adhering to the agreement. 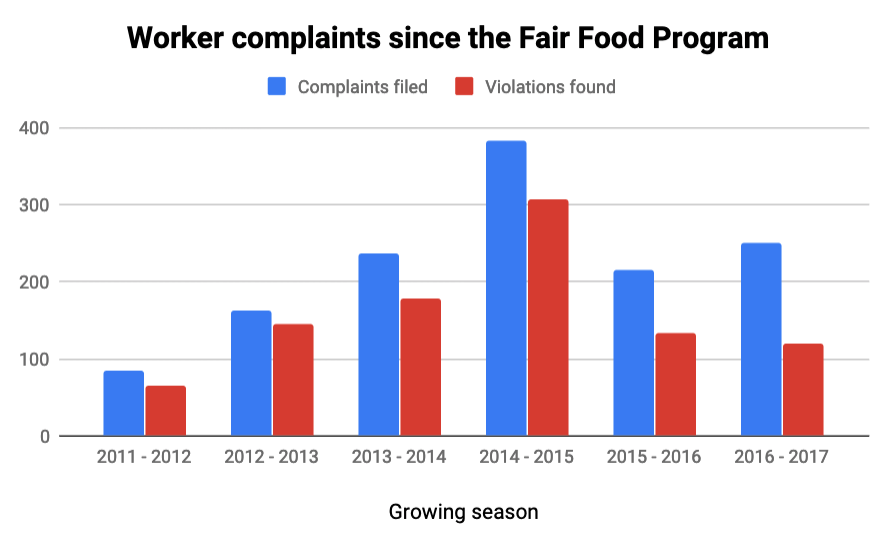 Major corporations like McDonald’s, Taco Bell, and Walmart have accepted the terms of the Fair Food Program. The one-cent premium they pay in addition to the price of tomatoes has helped relieve an economic burden for many farmworkers.

Wendy’s spokesperson Heidi Schauer said the company does not believe joining the Fair Food Program is the only way to act responsibly.

“Our Supplier Code of Conduct requires third-party reviews related to the human rights and labor practices for our suppliers,” Schauer said. “We also conduct our own audits at the locations of all our suppliers.”

Shortly after the Fair Food Program began, Wendy’s moved its tomato suppliers to Mexico. Since 2018, it currently sources its tomatoes from indoor greenhouse farms throughout North America. According to the New York Times, 90 percent of wintertime tomatoes are grown in Florida.

For longtime farmworkers like Lupe Gonzalo, the difference in quality of life at work improved dramatically. She already faced an uphill battle as a woman in the industry.

“People didn’t want to choose me for work that day because they don’t think women can pick as many tomatoes,” Gonzalo said with the help of a translator. “You had to endure vulgar comments and sexual harassment regularly.”

Gonzalo worked for 12 years in the fields before focusing her efforts on the Coalition’s mission. It ended its two-week tour of public universities in Gainesville.

She says it’s important for students to understand their power as consumers. It’s even more important that they realize the power of their voice to petition colleges and universities to boycott Wendy’s.

“That will help ensure that farmworkers can work in liberty and not under oppression,” she said.

Justin is a reporter for WUFT News who can be reached by emailing news@wuft.org or calling 352-392-6397.
Previous ‘Tired Of Releasing Balloons,’ 100 Attended Candlelight Vigil For Gainesville Mechanic Killed In Shooting
Next The Point, March 15, 2019: He Was An Aspiring Gainesville Rapper Until He Was Shot And Killed. A Childhood Friend Goes On Trial Soon For His Death 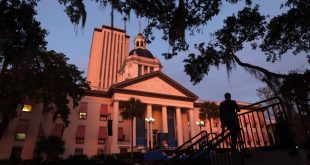 As they piece together a new spending plan, state lawmakers can anticipate $2 billion more in tax revenue than previously forecast, months after facing the prospects of a major budget shortfall.