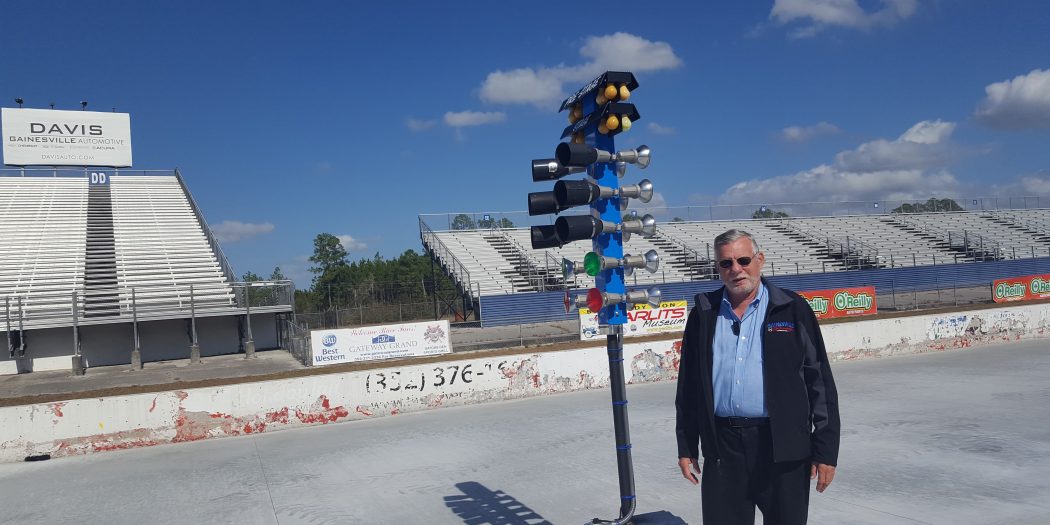 Cruise through Gainesville in March 1970, and you saw people flocking around muscle cars in hotel parking lots.

They rebuilt and swapped engines. They partied. Just out of town, Mike Yurick was working at the new Gainesville Raceway in preparation for the National Hot Rod Association’s (NHRA) first Gatornationals.

This year, he has the honor of being the track manager during the 50th Gatornationals. The races are held March 14 to 17.

The Gainesville Raceway hosts 60 events a year. Of these, the Amalie Motor Oil NHRA Gatornationals is the most important. It is one of the major drag racing events in the country along the Winternationals and U.S. Nationals. The Gatornationals are critical for points at the start of the season, according to Yurick. The race event is the traditional East Coast opener and the season’s first races for Pro Stock Motorcycle.

This year, drivers will enjoy a brand new concrete track. It is smoother than the last and provides better traction than the old asphalt. Racing legends like Don Garlits and Kenny Bernstein will be there.

Josh Hart, a driver from Ocala, will be competing in a highly competitive category, Top Alcohol Dragster.

NHRA drivers are some of the most accessible athletes of any sport. Fans have will have the chance to check out their cars in the pits and meet their favorite drivers.

People from around the world are expected to arrive. A quarter of the last Gatornationals’ crowd was from outside Florida. Yurick expects an even more diverse crowd this year.

New race records are also expected to be set with the improved track surface.

Even with the crowds on an upswing, drag racing is a niche sport and fans like Chip Rollins, 77, is eager to see a different focus on racing in the media.

The Rollins family runs a high-performance sales and service shop in Gainesville. Rollins Automotive and the family behind it are a staple of the drag racing community in Florida. In 1974 Rollins started his business in Fort Myers. He moved it up to Gainesville when his son Jason began studies at The University of Florida in the late 1990s.

Rollins has been racing for 60 years and was also at the first Gatornationals.

“You only see motorsports when someone gets hurt,” Rollins said.

Some accidents have led to safety improvements and Rollins spoke of these tragedies as major turning points in the sport.

Driver Eric Medlen received head and neck injuries due to tire failure at Gainesville Raceway in 2007. The NHRA found the injury to have been preventable and the HANS (head and neck support) device was created, Rollins said.

Of reputations and junkyards

Even accidents outside of the track affect the sport. Rollins spoke of street racing incidents in Ocala. To Rollins – the modern drag racing culture is heavily influenced by TV series like “Pinks” or “Street Outlaws,” which portray people street racing. Rollins said those grudge races for money are not true drag racing.

The NHRA does not want any criminal activity to be associated with its events.

“(Street racing) is like if you get in a fight in a bar and call it boxing,” Rollins said. “This track is a bit more rigid on the rules enforcement than other tracks in this area.”

As a governing organization, the NHRA has relaxed rules for cars made after 2008 with no modifications, according to Rollins. These cars come with safety equipment such as roll cages and other chassis reinforcement. The new rules make race events more open to casual racers and balance safety with fun.

“I have never put a scratch on my car in the racetrack,” Rollins said.

Rollins participates in sportsman racing, one of the lowest categories of NHRA drag racing classes along with Top Dragster, Super Street and Pro Mod. The highest are Top Fuel and Funny Car. Rollins argues that they are all just as fun as the next. He would be racing in the 50th Gatornationals, but he didn’t receive enough grading points. He receives grading points by attending other racing events and didn’t get to enough this past season. He is on the waitlist with the slim chance of racing.

The junkyard-picking tradition contributed to what Rollins called a southern style of racing. Most cars in the first few Gatornationals events were home built. Chip reminisces on truck racing and drivers like Billy Meyer and Kenny Bernstein.

“Bernstein was the first guy, in my opinion, who brought true professionalism to racing,” Rollins said.

Those not in it for the money

The Gatornationals do not bring Rollins Automotive much business. Manufacturers sell at the track during race days.

“We get a little business — usually a racer who broke something,” Rollins said, adding the Gatornationals “don’t bring a lot of business, but it does bring a lot of friends.”

Sponsorship is harder to secure and more expensive than previous years according to Rollins. Top fuel cars need around $5 million for a season. In the lower sportsman classes, people can spend up to $150,000 just on their car.

“Money is what drives it, money killed it, but money also made it much more professional,” Rollins said.

Derek Putnam, 42, started college at UF the same time as Rollins’ son Jason. The two are friends and frequently race together. Putnam has been going to Gainesville Raceway since 1994. He has also been hosting the 352 Shootout event at Gainesville Raceway for the past three years.

“Mike Yurick has been very helpful in letting us do that. A lot of people say: ‘Oh, it’s NHRA. It’s corporate. They don’t care about the little guy,'” Putnam said. “Nothing could be further from the truth.”

Putnam says the 50th Gatornationals are a family friendly unlike regular Wednesdays and Saturday nights at the dragstrip. Putnam has been around racing since he was six. He encourages anyone who is interested to get involved — despite a stereotype about racing being a money pit of a hobby.

Putnam mentions a funny cost exponential in racing: Drivers spend more money to go faster, which means they are on the race track for less time.

“Ninety-five percent are ‘gonna leave with less money,” Mike Yurick said, “but that’s OK — this is their sport.”

The schedule for the 50th Amalie Motor Oil NHRA Gatornationals can be found here.

Jake is a reporter for WUFT News who can be reached by emailing news@wuft.org or calling 352-392-6397.
Previous The Point, March 12, 2019: President Trump On Board With A ‘Permanent’ Daylight Saving Time
Next Gainesville Voters to Decide on Ballot Initiative for Charter Review Commission