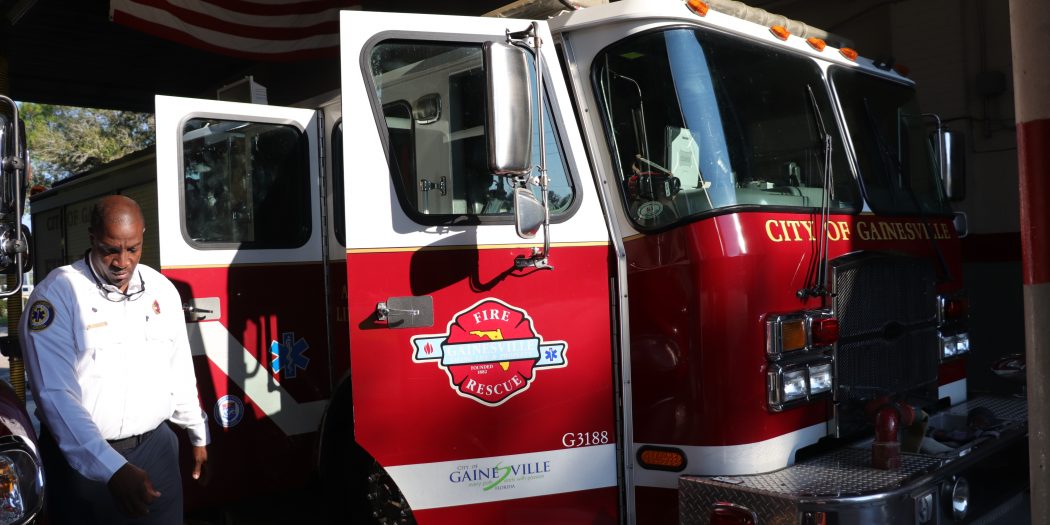 Lieutenant Willie Saulsberry opens up the doors to one of the engines at Station One in the east side of Gainesville. It is one of the busiest stations in the city. (photo by Alyssa Ramos)

“We’ve had to pick up extra shifts here lately because we are short-staffed,” said Gonzalez, vice president of the Gainesville Firefighters IAFFF Local 2157.

Gainesville firefighter units are spread thin and don’t meet national standards for staffing. Firefighters must sometimes travel from the opposite side of the city to respond to calls.

There are nine fire stations in Gainesville. Gonzalez, a lieutenant, works with Station 1. He has had to work extra hours to meet the increased demand.

That may change come February.

In 2017, GFR had a 47 percent success rate of spontaneous circulation for emergency medical services with a four-person unit. With a three-person unit, the success rate was 36 percent.

“If we did not get the grant,” Lane said, “it would put a tremendous amount of pressure on the department to provide the current level of service, particularly in the southwest region of the city.”

Gainesville’s recent commercial growth in the southwest area west of 34th Street and south of Archer Road has resulted in these increased calls.

Thirty-two percent of GFR’s total responses come from this area, Lane noted in his presentation to the city commission. From last September to August, this percentage totaled to approximately 4,600 calls the city and county responded to. This exceeds the standard amount, 3,000, for a single unit.

To meet demand right now, GFR has a temporary station in that area. The county plans to relocate its Engine 80 outside of the city’s parameters and into the unincorporated area. GFR hopes that this maneuver will stop the county from answering the city’s calls.

The grant comes in light of the Fire Services Assistance Agreement (FSAA) under which the county and city fire departments provide reimbursement for answering each other’s calls based on proximity rather than jurisdiction.

“The system is being maxed out,” Lane said.

The county has since canceled this long-standing 30-year agreement with the city. However, both departments still operate together under the Automatic Aid Agreement, under which the county and the city still address high-priority calls.

With limited assistance to the county, GFR can deploy its units to its respective parts of the city that need their services more, Lane said.

By next February, as part of the SAFER grant, GFR must hire and train new firefighters and obtain new equipment.

This is the largest sum of money GFR has ever been award from a SAFER grant. The grant will pay 75 percent of its personnel funding for the first two years and 35 percent the last year. After the three-year grant period ends, the county commission will bear the $1.1 million cost of maintaining the staffing levels and added equipment.

David Arreola, city commissioner for District 3, which includes southwest Gainesville, said the grant couldn’t have come at a better time. Given the growth of the city, he said, they would have paid for this down the road anyway.

“This is future planning at its best,” Arreola said.

Alyssa is a reporter for WUFT News and can be contacted by calling 352-208-7739 or emailing lyskramos19@gmail.com.
Previous Sept. 27, 2018: Morning News in 90
Next Alachua County Fire Department To Implement Drone Technology