89.1 WUFT-FM Morning Edition host, Glenn Richards, speaks with John Capouya, associate professor of journalism and writing at the University of Tampa. He is also the author of Real Men Do Yoga and the biography Gorgeous George: The Outrageous Bad-Boy Wrestler Who Created American Pop Culture, which is being adapted into a feature film. His latest book, Florida Soul: From Ray Charles to KC and the Sunshine Band, was published by University Press of Florida in September.

Florida Soul is one of the thank you gifts offered during WUFT’s fall pledge drive and a limited amount of autographed copies are available while they last. Find out more, here. 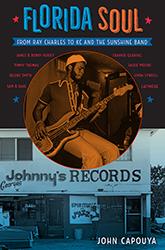 When recalling the roots of soul music, most people are likely to name Memphis, Detroit, New Orleans, Muscle Shoals, or Macon. But Florida also has a rich soul music history—an important cultural legacy that has often gone unrecognized. Florida Soul celebrates great artists of the Sunshine State who produced some of the most electric, emotive soul music America has ever heard.

This book tells the story of Ray Charles’s musical upbringing in Florida, where he wrote his first songs and made his first recordings. It highlights the careers of Pensacola singers James and Bobby Purify and their producer, Papa Don Schroeder. Florida Soul reveals how Hank Ballard created his international hit song “The Twist” after seeing the dance in Tampa and profiles Gainesville singer Linda Lyndell (“What a Man”). Miami’s Overtown and Liberty City neighborhoods produced Sam Moore of the legendary duo Sam and Dave, Willie Clarke and Johnny Pearsall of Deep City Records, and singer Helene Smith. Miami was also the longtime headquarters of Henry Stone, whose influential company T.K. Productions put out hits by Timmy Thomas, Latimore, Betty Wright, and KC and the Sunshine Band. Stone’s artists and distribution deals influenced charts and radio airplay across the world.

Born in the era of segregation with origins in gospel, rhythm and blues, and jazz and reaching maturity during the civil rights movement, soul music is still enjoyed today, still very much a part of our collective culture. John Capouya draws on extensive interviews with surviving musicians to re-create the excitement and honor the achievements of soul’s golden age, establishing Florida as one of the great soul music capitals of the United States.

Glenn Richards is Operations Coordinator and local host for Morning Edition on WUFT-FM. His background includes 30+ years of radio in South Florida as an air personality, promotion director, and morning show producer (WSHE, WZTA, & WFLC). His previous education includes a Bachelor of Science in Communication from the University of Miami where he was also general manager of WVUM-FM. Upon his arrival in Gainesville in 2006 to pursue a telecommunication master’s degree at the University of Florida College of Journalism and Communications, he worked as an air personality at WRUF-FM (both Rock104 and Country 103.7 The Gator). One of Glenn’s passions is local music. Since 1990, he has produced and hosted local music programs in both South Florida and Gainesville, playing demos and independent releases from unsigned artists, many of whom went on to national prominence including: Marilyn Manson, Sister Hazel, For Squirrels, Matchbox 20, Saigon Kick, Mary Karlzen, Nil Lara, Hundred Waters, and more.
Previous Hurricane Maria Brings Puerto Rican Students To Florida Schools
Next ‘TogetherUF’ Group Formed To Heal, Exchange Views After Spencer Event 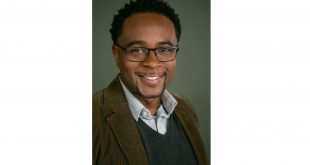 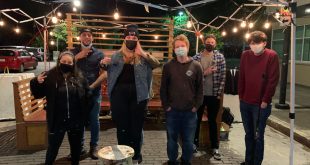 After a year of shutdowns and isolation, people are looking for ways to be entertained again.