Eliza Matthias remembers being pulled out of her fourth-period class one day in September; at first, she didn’t know why.

The Eastside High School senior started to conspire with her classmates, speculating as to why a select few of them received notes instructing them to go to the office after the school day was over.

Sure enough, she and a select few of her classmates heard the good news shortly after.

Should a student score well enough on the PSAT — less than 1%  of all test-takers that is — they now begin a journey to becoming a part of a community of scholars dating back to 1955. Prominent innovators, including Amazon founder Jeff Bezos, Supreme Court Justice Elena Kagan and Microsoft co-founder Bill Gates, belong to a long list of former high school graduates earning National Merit status.

Students have traditionally taken the test twice, once in 10th grade to practice and competitively in 11th grade for National Merit qualification. Some schools have moved to include ninth graders as well to give their students additional practice before the big day two years later. In Alachua County, the school district pays PSAT testing fees for all 10th and 11th grade students.

The catch? Many high school students often aren’t as keen about what National Merit can do for them in paying for college.

At face value, the rules of moving through the competition are somewhat difficult to understand for those unfamiliar with the process. PSAT scores and indicating Selection Index scores are released each year in early December, yet, potential semifinalists do not know officially if they have achieved semifinalist status until September of the next year, nearly a year to the date of the qualifying PSAT they took in the previous October.

Sophia Vernon, 17, is one member of the enormous class of semifinalists from Buchholz High School. At the time, she didn’t know if she would take last October’s PSAT until the week before. A dance intensive she was accepted into at Santa Fe College was running the same week, and she had to make a choice.

That decision may pay off for her once she graduates. But she didn’t really know or think about what was at stake on test day.

“I remember sitting there taking the test. I wasn’t too nervous because I don’t think I knew that much about like ‘PSAT it’s this huge scholarship qualifier.’ I just had a vague idea,” Vernon said.

Claire Kuntz, 17, is another of Eastside High School’s scholars. Her affinity for linguistics, her intended major next year, lead her to a special study course in Spanish at Eastside this year.

Unlike most students, National Merit had been on her radar even before she arrived at Eastside, but the dreaded almost year of waiting was nonetheless nerve-wracking for her.

“It was really frustrating,” Kuntz said. “The long wait, it was hard.”

Even calculating a hypothetical selection index is a tricky math formula. The selection index score is twice the student’s combined section scores from the reading, writing and language and math tests. Also, the index score for each state fluctuates from year to year to fit each class’s profile of the top 1% of scorers. A high Index score in one year may not be guaranteed semifinalist status in the next.

Kevin Zheng, 17, is another of Buchholz High School’s semifinalists. That day last October was quite stressful for him beyond the normal test anxiety. His role on the student council as a junior included assisting students in getting to their respective testing rooms, so calming his heart rate after running around with minutes to spare was a necessary exercise.

Last December, he did his calculations early to predict where his results might have fallen.

“When my PSAT score came out, I immediately went to the index,” Zheng said. “I was going through all the years. I said, ‘OK, none of these are above what I got. I’m pretty sure I made it.’”

Last month, Zheng’s prediction came true. He randomly checked Google for cutoff scores for this year and saw that he would qualify. The official letter came out shortly after.

Transparency for the program has been an obstacle to hopeful students since its inception, and many students and their families are kept in the dark until that official notification is released. Scouring college forums from past years is often all they have to try to get an unofficial clue as to what this year’s index cutoff will be for their state. 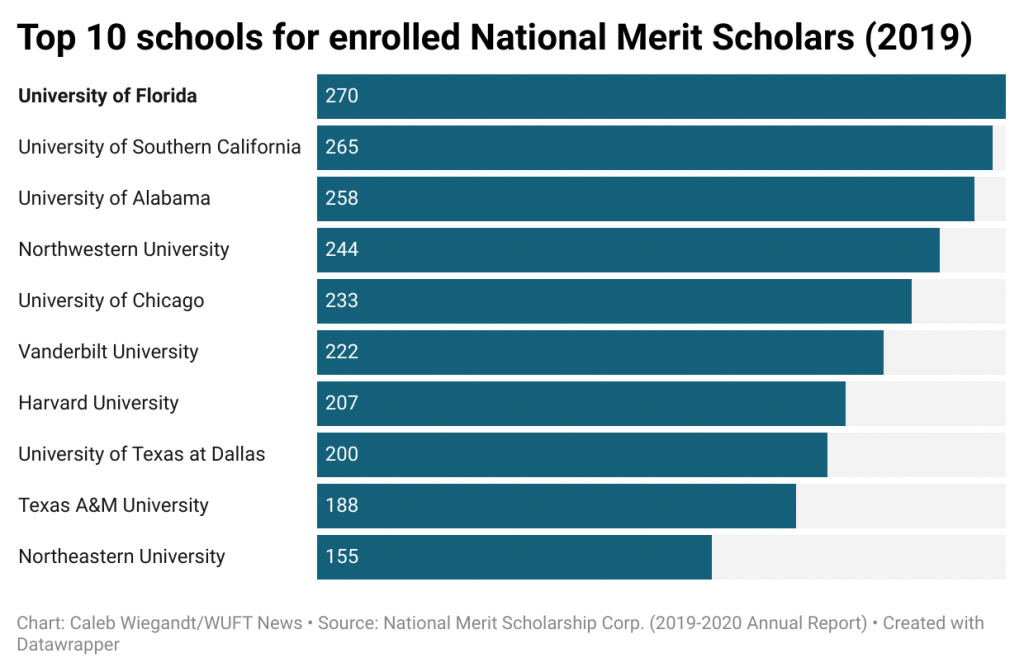 A representative from the National Merit Scholarship Corp. declined to release prior cutoff index scores or data on the previous number of scholars in Alachua County and the state of Florida, citing company policy. In fact, the corporation based in Evanston, Illinois, does not list any data on past cutoff scores or the number of scholars in each state on its website.

Through all of that, though, the light at the end of the tunnel for a National Merit Finalist is bright. Many universities — especially large public ones — across the United States offer lucrative scholarship packages for admitted students that have National Merit designation.

In Florida, nine state institutions — including the University of Florida — operate under the umbrella of the Benacquisto Scholarship Program, an award for Florida resident National Merit Finalists that guarantees the cost of attendance. The program opens the door for a “full-ride” scholarship hard to fathom, potentially covering the cost of not just tuition and fees, but also including stipends for housing, technology, even parking decals and personal expenses.

Those calculations are still some time away. To achieve finalist status — which 15,000 of the 16,000 semifinalists will — students will now complete National Merit’s specialized application, which includes confirming scores on either the ACT or SAT, a list of extracurriculars, an essay and teacher recommendations.

For these brightest of the bright, that’s the easy part.

Like her semifinalist peers, Vernon boasts an impressive involvement record that includes serving as president of Buchholz’s Future Business Leaders of America (FBLA) chapter, leading workshops with Girl Scouts of America and founding BEING, an organization dedicated to aiding female-identifying adolescents in embracing their inner value.

Yale University holds the number one spot on Vernon’s list for now, but she’s also looking at Brown, Duke, and Wellesley College, a private, women’s college in Massachusetts.

She agreed that National Merit could take on a bigger spotlight but emphasized the utmost importance of an excellent support system for high-achieving students.

“I think if we want it [National Merit] to really help students who are high-achieving and ambitious get into schools and be able to pay for it and achieve their ambitions, the thing we should focus on is that support.”

Matthias said she recognizes the somewhat obscurity that National Merit swirls in. Taking an approach like the big emphasis on Bright Futures, for example, is something she thinks could help.

“It’s [Bright Futures] really pushed, it’s more normalized, everyone knows what you have to do to get it,” Matthias said. “I definitely think it [the PSAT] could be promoted more.”

Next year, she dreams of attending Vanderbilt University, double majoring in biology and religion. For now, though, she’ll focus her efforts on getting to the finish line and making Eastside’s varsity basketball team again.

“It’s great to know that this award is solidified, and I can tell colleges, ‘Hey, I got National Merit!’”

Caleb is a reporter for WUFT News who can be reached by calling 352-392-6397 or emailing news@wuft.org.
Previous Gator Good provides a life-changing experience
Next Meet the 17-year-old helping young women embrace their Inner Value