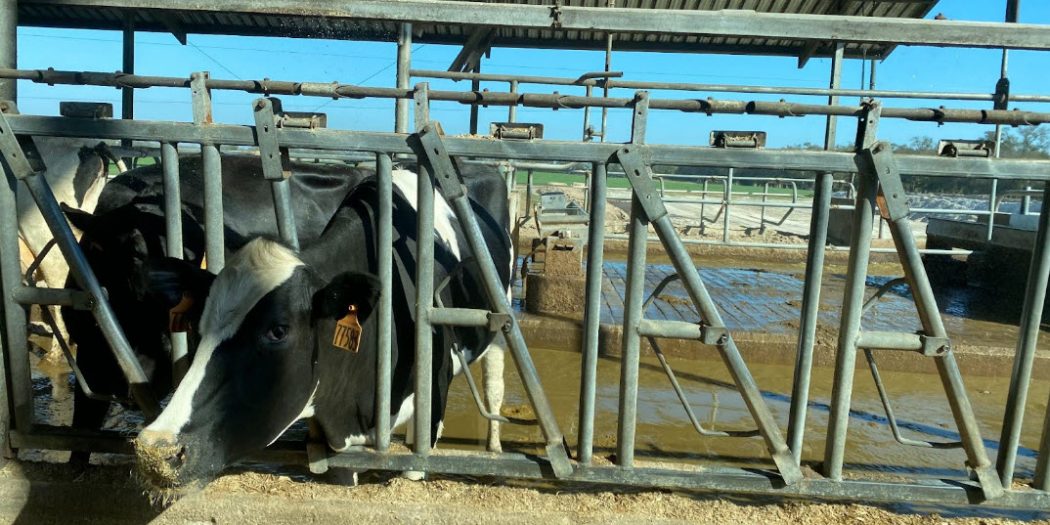 A cow stands in the free stall barn at Alliance Dairies in Trenton. (Kristin Moorehead/WUFT News)

WUFT · The digester in Trenton

Henderson is the CEO of Alliance Dairies in Trenton, but you won’t see her in a pantsuit. Alliance is the largest free-stall dairy in the state, with more that 6,500 Holstein cows. And Henderson, with her blue jeans and pickup truck, takes her job very seriously.

“I don’t want to say cows are more important than people but, you know, that is your livelihood. So cropping or taking care of cows – feeding, breeding, treating cows, milking cows – that was always of utmost importance,” she said.

Besides anaerobic digestion, University of Florida researchers are working on another way to reduce methane emissions from livestock. Juan Vargas is a PhD student with UF’s Institute of Food and Agricultural Sciences. He is working with a team of researchers exploring food alternatives and additives to reduce the methane produced inside the cow.

He said some of these experimental feeds show promising preliminary results. “Red algae shows a 60-80% reduction of methane in the rumen,” Vargas said. Other feed alternatives include nitrates and essential oils, which reduce methane by 30% and 10% respectively.

However, more research still has to be done to make sure the additives are safe for both cows and humans.

One of her responsibilities in managing a farm this large is processing the cow’s manure. According to the USDA, dairy cows can produce 80 pounds of manure per day. With thousands of cows, all that poop can really add up.

Doctor Saqib Mukhtar is the Associate Dean for the University of Florida’s Institute of Food and Agricultural Sciences. He explained that cows have a special organ called a rumen.

In the rumen, tiny microorganisms break down the food and release gas. When the cows poop, some of those microbes continue to break down the manure, releasing more gas into the atmosphere, mostly methane.

Mukhtar said each molecule of methane is 21 times more potent than a carbon dioxide molecule. Greenhouse gases, like carbon dioxide and methane, contribute to climate change by warming the planet, which causes more severe storms and rising sea levels.

“But those impacts are not just always localized, right? With the atmosphere, the gases do move,” Mukhtar said.

Dairy and beef cattle farms produce about 2% of total worldwide greenhouse gas emissions. According to Climate Watch Data, in 2018, 2% accounted for 1 billion tons of greenhouse gas.

Alliance uses a system called an anaerobic digester to process their manure. From the outside, it just looks like a large concrete platform covered in metal pipes. But Del Bottcher, a soil and water engineer who worked on Alliance’s digester installation, said the system is much more than meets the eye.

“You could actually play a football game down inside of this thing, it’s so large,” he said. The digester is 140 feet wide and extends 12 feet underground.

Alliance is a free-stall dairy, meaning that all the cows stay in fan-cooled, water-misted and sand-filled barns. “So it’s kind of like they’re laying at the beach all day because sand is very, very comfortable,” Henderson said.

Bottcher said that cows actually prefer to stay in the barn rather than out in a pasture because of the Florida heat – cows don’t sweat, so they enjoy the shade and coolness of the mist.

Each barn is built on a one percent incline. When the cows do their business, water will flush the sand and manure down the slope. The sand is separated and laid in the sun to dry and be reused in the barns. Pumps push the remaining manure through metal screens to remove the water. The water is also recycled and used to reflush the barns multiple times.

Mukhtar explained that the inside of the digester works just like the inside of a cow’s rumen. “So when you have a lack of oxygen in that environment, you have this anaerobic bacteria that start to digest that manure,” he said. But unlike a cow’s rumen, the gas that is produced is captured instead of being released into the atmosphere.

Once the manure goes into the digester, it sits in the oxygen-free environment while bacteria break it down for almost a month. The resulting methane is pumped into a generator, which uses the gas to create electricity. This electricity gets sent to the power grid. However much electricity Alliance produces, that much is removed from the dairy’s energy bill, saving the dairy money.

Henderson said when the generator is running, it produces enough electricity to power 425 homes. But the generator often isn’t running.

“We just continue to have challenges related to the generator, in one thing will break and then we’ll fix it, and then, ‘Oh darn, something else broke,’” she said.

Henderson said the primary reason for all the malfunctions is that the gas produced from digesting cow manure is full of other materials, so it’s not pure. Running this dirty gas through a generator can cause the machine’s parts to wear out quicker.

This constant repair can be expensive. Henderson said the dairy paid $40,000 for a replacement part on the generator that got there 6 months later. During that time, Alliance had to burn the methane that the digester generated instead of generating electricity.

Add on top of this the initial investment to build the system. Henderson said in 2011, the cost of building Alliance’s digester was $8 million. A government grant covered 30% of that, but the rest was a cost that Alliance had to pay upfront. This is a cost that many smaller dairies simply can’t afford by themselves.

According to the EPA’s AgSTAR anaerobic digester database, there are 294 anaerobic digesters that operate on dairy-only farms in the U.S. Of those, only 88 received at least partial USDA funding for construction. This doesn’t include state or local programs, but it’s still only about 30% coverage.

Henderson said one goal for the digester when it was built in 2011 was for the electricity generated to fully pay for the cost of the construction in 10 years. But with the constant costly repairs, she said that hasn’t happened yet.

Moving forward, Alliance has partnered with TECO Peoples Gas, a natural gas distribution utility that serves almost 425,000 customers in Florida, to build a biogas conditioning facility. This will clean the methane and turn it into natural gas, which will then be pumped onto an interstate pipeline. That gas can theoretically be used for energy all over the country. This can actually make the farm more money.

Bottcher says California has a carbon credit program that will pay dairies for their natural gas. And as long as Alliance’s gas could theoretically go to California, the California government will give Alliance these credits.

Despite installing a system that reduces methane emissions on her farm, Henderson is skeptical about the environmentalism movement.

“The farmer has to be incentivized to do it, because if it doesn’t improve his financials, there’s not gonna be any incentive to do it. Because sustainability, you got to be profitable to be sustainable,” she said.

Henderson hopes that once the natural gas infrastructure is in place at Alliance, that profit will start to show up.

Kristin is a reporter for WUFT News who can be reached by calling 352-392-6397 or emailing news@wuft.org.
Previous Gainesville’s new senior housing strategist on the affordable housing shortage
Next The Point, May 27, 2022: Florida governor signs home insurance, condo safety legislation following special session