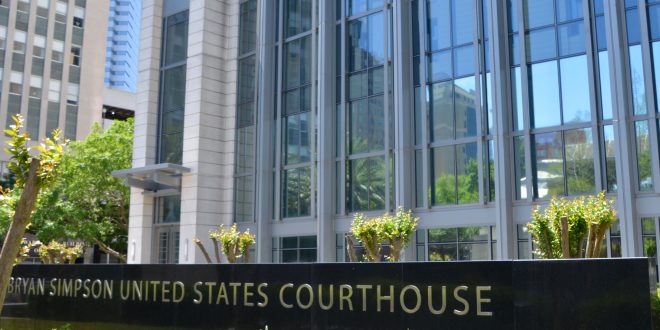 By Daniella Sevares and Elise Elder

A federal grand jury has indicted a self-described gang member with a violent criminal history in a Florida prison, accusing him of mailing a ruthless threat to a senior federal judge in Jacksonville – and trying to frame one of his fellow prisoners, according to court records.

In the handwritten letter, the writer graphically threatened to sexually assault the judge’s wife while the judge watched then behead the judge and send his body parts to his children.

“I know where you and your family live, so if you want to stay alive past the next 60 days your best bet is not to get anybody involved in this,” the letter said. It added: “It’s in your best interest to comply.”

In court records describing its nearly year-long investigation, the FBI said the inmate it believes sent the letter, Jeziah Joshua Guagno, 22, of Boynton Beach, Florida, licked the envelope to seal it – leaving behind his DNA – and left a palm print on it that the FBI laboratory traced back to Guagno.

A grand jury in Ocala, Florida, indicted Guagno last week on a charge of mailing a threatening communication to a federal judge.

The case is the latest in what law enforcement and court officials worry is a rising trend in violent threats against judges nationwide. Congress is considering a new law to help keep personal details about judges – including information about their homes and families – from becoming public, after one federal judge’s adult son was murdered in her home.

The target of the threats, U.S. District Judge Harvey Erwin Schlesinger, 81, five months earlier had dismissed a handwritten pleading Guagno filed in federal court, records showed. Guagno said a prison guard at the Suwannee Correctional Institution in north-central Florida had assaulted him while he was in restraints in 2019 and asked the judge to order a federal investigation.

In his ruling, Schlesinger explained that a judge can’t file criminal charges against anyone and can’t order an investigation. He encouraged Guagno to file a grievance with the state prison and directed his clerk to send Guagno a civil rights complaint form to pursue further legal action.

Months later, in May last year, the threatening letter told Schlesinger to expect a new motion to reopen a case. By then, Guagno had been transferred to another prison, in Florida’s Panhandle.

In a brief interview over email from prison, Guagno disputed that he was involved in threatening the judge. He said prison officials had seized an electronic tablet he was using to communicate, and he did not respond to further questions.

An FBI special agent, Louis Bronstein, laid out the criminal case against Guagno in an affidavit requesting a judge’s approval for a fresh DNA sample and fingerprints from Guagno in prison. The FBI obtained the new sample and fingerprints at the end of March, according to a court filing last week. The court documents were filed in U.S. District Court for the Northern District of Florida under a name and a case number with no obvious references to Guagno. The new criminal charge against Guagno was filed Tuesday.

The FBI said its laboratory determined last month that DNA from a tube of lip balm that prison officials already seized from Guagno’s cell matched saliva on the envelope sent to the judge. It also said Guagno’s handwriting had “characteristics in common” with the threatening letter.

The FBI said Guagno apparently tried to frame a fellow inmate at the same prison, Mack Arthur Simmons II, 26, of Pace, Florida, by writing Simmons’ name on the envelope. Simmons told a deputy U.S. marshal that someone must have been trying to frame him and provided a cheek swab that ruled him out as a suspect, the FBI said.

In an interview, Simmons said he doesn’t recall knowing Guagno or interacting with him. He was sentenced on burglary and theft convictions and expects to be released as early as 2024.

“If I did have a disagreement with that dude, I really don’t remember,” he wrote in an email from prison. “There are so many bad people in here. I tend to disagree with a lot of them.”

The FBI said it found no connections between the federal judge and Simmons – or any other inmates in the same Florida prison.

Schlesinger, the judge, declined through a spokesman to comment on the investigation.

Guagno is serving time at the Santa Rosa Correctional Institution in the Panhandle for convictions of robbery with a pistol and aggravated assault over an August 2016 holdup at a Family Dollar store in Lake Worth when he was 16. Hours later that same day, Guagno was involved in a hit-and-run crash in nearby Lake Park – even though he had no driver’s license – and fled the scene, court records showed.

In 2018, Guagno also was convicted of stomping and punching a fellow inmate over a bag of snacks and toiletries at the Palm Beach County West Detention Center days after he turned 18. Before the fight, Guagno told his victim that Guagno was a member of Zoe Pound, a violent, Miami-based Haitian gang, court records show.

Guagno was scheduled to be released as early as August 2023.

Law enforcement officials take threats seriously against judges, especially since a disgruntled lawyer shot and killed the 20-year-old son and wounded the husband of U.S. District Judge Esther Salas in New Jersey at the family’s home in July 2020. Salas said the gunman, who killed himself after the attacks, also had been targeting Supreme Court Justice Sonia Sotomayor.

Salas, who has lobbied Congress to better protect personal details about judges, declined through a spokesperson to talk about the Florida case. The top FBI official in New Jersey when her family was shot said threats against judges are becoming more common.

“Judges are targets of multiple threats, and require a high degree of scrutiny and investigation,” said Greg Erhie, who was the special agent in charge in Newark at the time of the shootings. “Most of the time, this is usually just rhetoric. People are angry, and they make the threats, but it is scrutinized heavily not only by the courts but also by the legal system.”

Another expert, Timothy Gallagher, also was a former top FBI official in New Jersey and investigated threats against members of Congress when he worked in Washington. He said the fact the letter threatening the judge in Florida appeared to come from a prisoner did not mean it could be taken lightly.

“This individual is incarcerated,” he said. “However, that doesn’t mean that they don’t have reach to people outside of the prison system. That is why you have to take these threats very seriously.”
___
This story was produced by Fresh Take Florida, a news service of the University of Florida College of Journalism and Communications. The reporters can be reached at eliseelder@ufl.edu and dsevares@freshtakeflorida.com. You can donate to support our students here.

Daniella is a reporter for WUFT News who can be reached by calling 352-392-6397 or emailing news@wuft.org.
Previous The Point, April 18, 2022: What the school bus driver shortage has meant for students and their parents
Next The Point, April 19, 2022: Judge in Florida rules against travel mask mandate