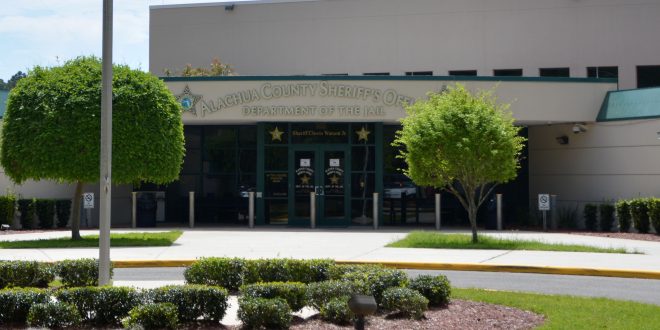 “Importantly, it is my belief that Mr. Brewton will not commit crimes in the future and that he does not pose a threat to public safety,” Antoon II wrote.

The lead investigator for the Florida Department of Law Enforcement’s sweeping criminal probe into jailhouse voter sign-ups by this county’s Democratic elections supervisor concluded that the effort represented a “haphazard registration of inmates” that could compromise the integrity of the state’s voter registrations, according to her summary notes in the case.

The report by the investigator, Tracey Rousseau, made clear that the early targets of the FDLE’s case were Alachua County’s supervisor of elections, Kim A. Barton, and her then-outreach coordinator, Thomas “T.J.” Pyche, who were initially suspected of corrupt practices, a felony charge, and neglect of duty, a misdemeanor.

In her report, Rousseau, who is registered as a Republican voter, blamed the elections office for what she described as “the mass registering of inmates to vote without any inquiry into the person’s prior criminal history, proof of identity, satisfaction of prior legal financial obligations, restoration of voting rights, the charges they were being held on (or) their knowledge level and understanding of the states’ voting system and requirements.”

Despite the FDLE investigator’s conclusions, the office of the Republican state attorney in Gainesville, Brian Kramer, last week cleared Barton and Pyche of any misconduct in the case and instead filed felony voter fraud charges against 10 former jail inmates. They were accused of registering and in some cases voting in the 2020 presidential elections as ineligible former felons. Pyche, who has declined to discuss the investigation, resigned from the office last year.

Rousseau acknowledged in her investigative report that the failures she blamed on the elections office to adequately investigate the backgrounds of inmates who were registering as voters were not required by law for anyone in the office to perform.

Under Florida law and court rulings, most felons – except those convicted of murder or sexual offenses – can register and vote after they completed their prison terms and no longer owe any unpaid fines or court fees. It would have been permissible to register jail inmates as voters at the time who were awaiting the outcomes of other criminal cases if their previous felony cases had already been wrapped up.

Rousseau also cited at least one jail official, Sgt. Patricia Flynn of the Alachua County Sheriff’s Office, who told investigators that Pyche during jailhouse registration drives urged inmates to consult their lawyers and told them that if they owed unpaid court fees from previous felony cases they would be ineligible to vote.

“She never heard Pyche encourage the inmates to register or vote if they had prior felony convictions or outstanding court costs,” Rousseau recounted.

Another jail official, Officer Broward Allen, told the investigator that, “it was clear the inmates knew it was incumbent upon them to know if they qualified or not,” but Allen said some inmates he believed were ineligible were filling out voter registrations.

Still, Rousseau faulted Pyche over the registrations: “The overall conclusion from multiple inmate interviews was they were either told or believed they were able to legally register and/or vote,” she wrote. She added it was Pyche’s job to educate citizens about voting laws and regulations. Pyche declined to speak with Rousseau during her investigation, she said.

Barton, who Rousseau interviewed in December, said there was no wrongdoing in the case in a statement Monday. She cited a Florida statute to emphasize that the supervisor of elections office followed the law to identify convicted felons whose voting rights have not been restored.

“We take our responsibility seriously and will continue the work of ensuring all eligible Alachua County voters can participate in the democratic process,” she wrote.

Ongoing FDLE investigations have also focused on Duval, Gadsden, Lake and Leon counties. Although Lake County is reliably red, those others are among the few in Florida that lean heavily Democratic.

Despite praising Florida for running a smooth election in 2020, Republicans here have pushed for more regulation of elections and a full audit of the presidential election. In response, Gov. Ron DeSantis proposed a new Office of Election Crimes and Security to investigate election crimes. The Legislature passed a bill creating the unit in March, and DeSantis is expected to sign it soon.

In Gainesville, the State Attorney’s Office assessed the evidence included in the investigative report themselves before filing charges, said Darry Lloyd, the office’s chief of investigations. Once assigned to the case, a prosecutor can still decide to charge election employees if it finds additional evidence. The cases have not yet been assigned to a prosecutor as of Monday, according to Lloyd.

Some of the former inmates charged with felony voter fraud said Pyche, who conducted the registration drives during at least three jailhouse visits, did nothing wrong. Others blamed him for the criminal charges they are now facing.

“About the guy who help us vote he did nothing wrong tho,” wrote Therris Lee Conney Jr., 33, of Gainesville, in an email from a Florida prison where he is serving a five-year sentence on unrelated drug and weapons convictions from October 2020, weeks after he registered to vote as a Democrat.

Another, John Rivers, 44, of Alachua, wrote: “They actually helped us fill out the voter rights registration forms. They came in and recruited us to vote, and then you know, told us that we could vote and now they’re charging us for voting. He shouldn’t have been in there signing people up and telling them stuff if he didn’t know what he was talking about.”

Florida’s rules place the burden on felons who have finished serving their prison sentences to research whether they still owe any unpaid court fees that would make them ineligible to register as voters or cast ballots.

In one of the legal challenges over the issue in 2020, a federal judge in Tallahassee noted there is no centralized office tracking fines and fees across courts in Florida’s 67 counties. Amounts owed in older court cases – or in felony cases in other states – can be especially difficult to determine because court records might not be immediately available.

If felons can’t determine on their own, they can request an advisory opinion from the Florida Division of Elections, where government lawyers would investigate to look for unpaid debts and tell a potential voter whether they can legally register.

Carolina is a reporter for WUFT News who can be reached by calling 352-392-6397 or emailing news@wuft.org.
Previous A Gainesville artist is shining a light on abandoned African American cemeteries
Next Inside the effort to bring healthcare to Gainesville’s uninsured