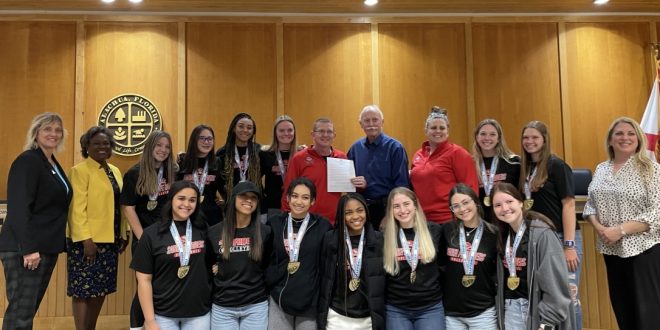 The James A. Lewis Commission Chambers was more than three-quarters full as players, their families and city leaders gathered to recognize the achievements of the team and coaching staff. At the meeting, Coerper proclaimed the day to be “Santa Fe High School Lady Raider Volleyball Day,” in recognition of the team’s first-ever state title.

Acknowledging the approach of International Women’s Day on March 8, Vice Mayor Shirley Green Brown expressed sincere pride in her congratulations to the Lady Raiders. She commended them for inspiring women around them and setting an example as trailblazers in Santa Fe High School girls’ athletics

“On the heels of International Women’s Day,” Brown said to the young women, “I congratulate you.”

In his proclamation, Coerper recognized the players for their representation of their families, school and community, and for encapsulating the Good Life Community values that Alachua shares. He also acknowledged the Santa Fe High School athletics program in promoting values of sportsmanship, teamwork and commitment.

The Lady Raiders brought home the FHSAA Class 4A State Championship title on Nov. 17, 2021, in a game against the Calvary Christian Eagles. They finished the season with a 29-3 overall record. They also finished ranking first in Florida, and No. 2 in the nation, marking a historic season for the team.

For many of the players, this was not the first appearance they made at the state championship. Seniors on the team like Rylie Tam made it to the state final three of four years at Santa Fe but finished as either state runners-up or regional finalists until November. Tam said she was proud of the win but also happy to serve as a role model to younger female athletes.

“It is really cool,” Tam said. “Women’s sports have grown so much lately, and I hope to inspire the future for other girls at Santa Fe.”

Tam graduates in May and said she has been talking with colleges about continuing her volleyball career. She said she is looking to sign with a program in the next couple of weeks.

Tam’s family was one of many that attended the meeting to hear the mayor’s recognition of the team. Carrie Tam, Rylie’s mother, said she was particularly pleased with Santa Fe and Alachua’s support of the team. She said the school provided a bus for the student fan section to attend the game in Fort Myers and even granted them an excused school day.

Carrie Tam said she was “amazed by the tenacity” of not only her daughter but the team as a cohesive unit in earning the title and the recognition they received at the meeting.

Head coach Eric Marshall shared some details of the environment of the state championship game that put them in the position to receive such recognition by the mayor and city commission.

Marshall said the Lady Raiders controlled the match throughout, and the Eagles did not have an answer to their offense as the game neared its end. Despite his efforts in keeping the crowd humble, he said it was as if everyone was already celebrating before the win was confirmed.

“You could feel everybody take a deep breath,” Marshall said about the environment after hearing the final buzzer.

He said the win was all about the girls finally securing the title they had at the tips of their fingers for over three years. He spoke highly of the team’s athletic performance but was most proud of their behavior as teammates to each other.

Marshall was happy to be attending the meeting but more excited that the girls were being recognized formally by the city. He said the support of Alachua and Santa Fe was “huge,” despite being a small-town high school. He and the team were present to return their respect to the city of Alachua and say thank you for the continued support, Marshall said.

Assistant coach Nicole Stout said she was especially proud to watch as the team received the same support from the community that the men’s programs receive. She said that it was incredible to see the city and school communities recognizing these hardworking young women.

“Alachua has a small-town feel, like a big family,” Stout said in describing the support showed to the team. “It’s every coach’s dream.”

Cassidy is a reporter for WUFT News who can be reached by calling 352-392-6397 or emailing news@wuft.org.
Previous Mayor Lauren Poe gives his last State of the City Address, covering equity and inclusivity
Next The Point, March 1, 2022: A bill changing how Alachua County elects commissioners is moving through the Florida House