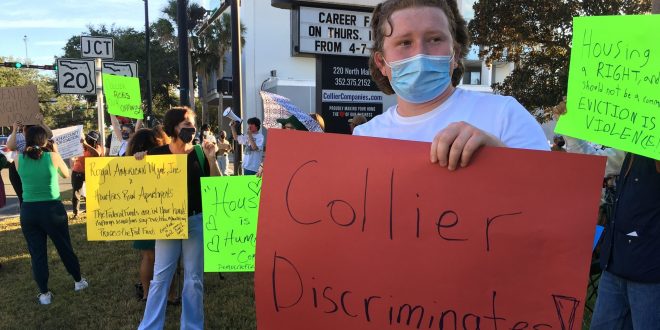 Carrie Saites says she’s facing eviction after her landlord denied her rent payment for her home of five years through the federal Emergency Rental Assistance Program.

“Bewildered and shocked,” Saites said during a protest organized in front of the offices of a local developer in downtown Gainesville on Thursday afternoon. “That’s how it makes me feel.”

Saites said her landlord helped her successfully apply for funding from the assistance program in August – then handed her a five-day eviction notice.

“I’m scared,” she said. “But I’m also scared to the point that, if you’re going to evict me anyway, I’m going to let the people know what you have done.”

Dozens of passing vehicles honked in support of the nearly 60 people took part in protest organized by the Alachua County Labor Coalition outside Collier Cos. on North Main Street.

Sheila Payne, the coalition’s housing director, said Collier and other landlords have denied potential tenants with legal housing vouchers and blocked current tenants from using the assistance program’s funds to pay for rent. This, Payne said, would violate a city ordinance prohibiting landlords from discriminating against any “lawful source of income.”

A spokesperson for Collier, which owns over 11,000 apartment units in Florida, declined to comment on the protest. The company’s founder, Nathan Collier, is a financial contributor to the University of Florida College of Journalism and Communications, where WUFT News is based.

Payne said the demonstration provided the coalition an opportunity to connect with more tenants on the brink of eviction, though some tenants declined to show.

Local activist Kali Blount, a registered nurse at UF Health Shands Hospital, held a sign during that included a profanity and demanded that Collier not go through with any evictions.

“I’m just fed up with these people who won’t let people have decent housing, even when the resources are sitting there waiting,” Blount said. “They still want to kick people out. It’s barbaric. It’s brutish.”

The Rev. Milford L. Griner, a former pastor at Freedom United Methodist Church, said “every single person in this city deserves housing” and that not only is it “a human right, it’s also the law.” Griner also called on the city to turn the heat up on landlords.

“We must keep the feet to the fire of those who are trying to stamp down on decent housing for the people of Gainesville,” he said.

Because of Gainesville’s lack of affordable housing, some graduate students will have to pay more than double their current rent, forcing them to get second jobs, apply for rental assistance or ask for money from family and friends, Taylor said.

“We have to think about those people and what they want, and what is best for our community, instead of what’s best for some company,” she said.

“It’s important that we all come out and support each other when it comes to rent, because if we stand divided, then the landlords and the management companies will do whatever they want with impunity,” Melcher said.

Melcher said his apartment building’s management has failed to do basic repairs, including an instance over the summer where it failed over two weeks to fix his air conditioning.

“That’s just emblematic of a lot of things people go through in the city, where they see that their landlords don’t have their best interests at heart,” he said.

The coalition organized a protest in May outside of Bivens Apartments, a housing unit owned by Collier. The protest succeeded in reversing the evictions of seven tenants.

Saites said she hopes the protest Thursday would spur more residents to action.

“If more people hear about this, perhaps more people will get angry, because the money that is funding these programs are the American tax dollars,” she said. “Everybody should be mad.”

Eliot is a reporter for WUFT News who can be reached by calling 352-392-6397 or emailing news@wuft.org.
Previous Junior college athletics focuses on a better future with Name, Image and Likeness law in place
Next TB McPherson Pilot Program offers new tennis opportunity in east Gainesville