Gainesville declared a climate emergency in 2019. The same year, the University of Florida began designing a central energy power plant set to use natural gas.

After two years of planning, UF is moving forward with the project, including last week reviewing offers from contractors to build a plant to provide efficient steam, chilled water and electricity from Gale Lemerand Drive using a combined heat and power production method.

The project also calls for construction of both a new South District thermal piping distribution loop to improve chilled water and steam delivery to campus and hospital facilities, and a new electrical substation on Mowry Road.

UF has yet to announce how much the project will cost for construction and upkeep.

Natural gas and landfill burning would be among the resources used to power the plant. Both produce greenhouse gas, an emission the federal government said contributes to climate change.

The Gainesville has set a goal of using 100% renewable energy by 2045. UF said the power plant is estimated to run for 50 years. Despite the city and UF being separate entities, UF predicts the power plant will use natural gas and landfill burning longer than the city’s goal calls for.

UF Assistant Vice President for Communications Steve Orlando wrote in a statement to WUFT that the plant would be the best approach to provide UF with the power its infrastructure needs.

“The new energy plant will produce approximately 25,000 tons of chilled water and 210,000 pounds of steam per hour and will reduce UF’s overall carbon emissions by 25%,” Orlando wrote. “The largest step toward carbon reduction the university has taken in 15 years.”

According to Orlando, construction on the plant is expected to begin in 2023. 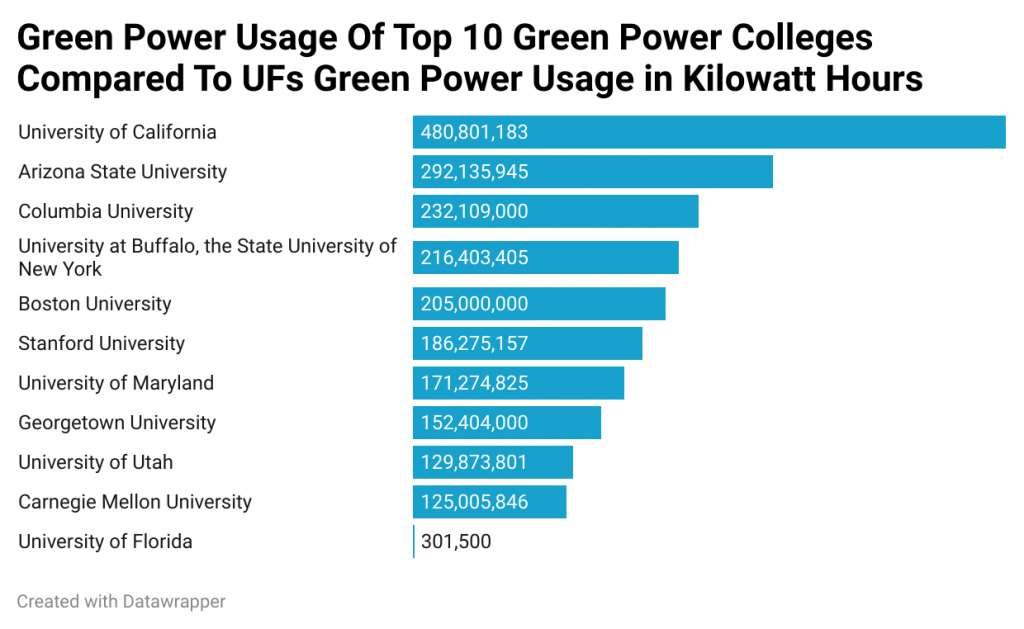 The plan, however, is facing criticism and praise from various corners of the community.

George Cavros, the Florida energy policy attorney for the Southern Alliance for Clean Energy, said UF is not moving toward a future free of fossil fuels.

“Instead of leveraging innovation and technology to power its campus with clean energy,” Cavros said, “it plans to invest in … an investment that will be locked in for some 50 years.”

Cavros also said the coupling of fossil fuels and renewable resources is not enough.

“We need the university to lead,” he said. “Incrementalism is not the scale of action that we need right now. We need real leadership from the board of trustees and the president.”

While Cavros said natural gas is detrimental to the environment, Dustin Meyer, the American Petroleum Institute’s vice president of natural gas markets, wrote in a statement that this resource is essential to powering the lives of Americans from coast-to-coast.

“College campuses should be the places that are leading our transition to renewable energy, not building infrastructure locking us in to fossil fuel use for decades to come,” Payne said.

The Gainesville hub of the Sunrise Movement also wants UF to use more renewable resources.

“Slowly, we are building an army of young people who are looking to stop the climate crisis and get fossil fuel money out of our government elections and corporations,” said Anton Kernohan, the local hub leader.

Makenzie Griffin, director of the Sunrise Movement’s Don’t Pass Gas Campaign, said the plant project will put the university behind in innovation and technology.

“It is going to be our Black and brown communities in East Gainesville that will feel the impacts of climate change,” he said. “Aside from climate issues, that area is already being gentrified.”

In an effort to put pressure on UF’s board of trustees, the Gainesville hub of the Sunrise Movement and Climate Action Gator recently held a protest against the plant construction.

With the community in mind, Gainesville City Commissioner David Arreola said he would like to see UF work toward using 100% renewable energy.

“I am of the fervent belief that society needs to move completely to renewable energy,” Arreola said. “I would like to see a heavier investment into the solar energy portfolio rather than focusing on natural gas transitions.”

While Arreola said he wishes UF would transition to renewable resources, he believes Gainesville’s conservation efforts are separate from the university’s.

“Our legacy of conservation and putting the environment first stands for itself,” Arreola said. “Whatever decision is made, it will not change that.”

The U.S. Environmental Protection Agency in July published a list of the top 30 college and university partners in tackling climate change. UF was not on the list, though U.S. News and World Reports has since placed it as fifth on its ranking of top public universities.

Griffin said she wants UF to improve its standing in sustainability.

“We know UF is proud of their top 5 standing,” she said. “We want them to be top 5 in sustainability as well.”

Kendall Brandt is a reporter for WUFT News who can be reached by calling 352-392-6397 or emailing news@wuft.org.
Previous Alachua County Public Schools launches free tutoring program
Next The ‘van life’ trend has reached Florida. Here are a few people who have embraced it