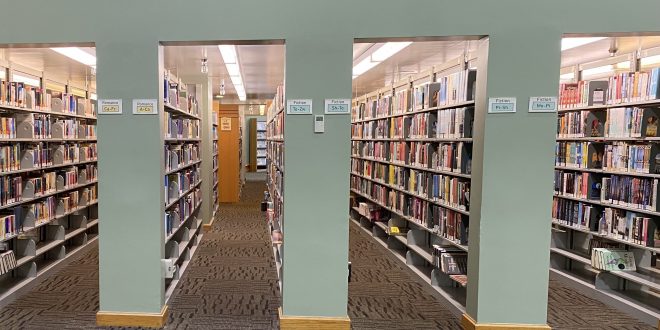 For 20-year-old University of Florida student Sophia Missigman, spending her own money on books for her course on children’s literature just wasn’t feasible. That’s where the Alachua County Library District came to save the day.

The month of September is National Library Card Sign-Up Month, an initiative started by the American Library Association in 1987. Participating libraries across the nation coordinate events, activities and contests to celebrate the month in the hopes to increase library card memberships.

The Alachua County Library District is an eager participant in the Sign-Up Month festivities.

Last year’s Library Card Sign-Up Month saw a decrease in participation. With the pandemic in full force, many people weren’t as motivated to become a new library cardholder. District spokesperson Rachel Cook said the first half of September brought in more than 430 new card sign-ups, up from 187 in the same time period in 2020.

“Though we are taking social distancing measures and other safety measures, I think concerns about COVID may keep some people from coming into the libraries,” Cook said.

To assist the cause this year, the Rotary Club of Gainesville has donated 10, $20 Publix gift cards as contest prizes. Those who sign up for a library card this month can take a photo with the library’s “mega card,” and tag the Alachua County Library District in the photo in order to enter. The winners will be officially chosen and announced in October.

A library card gives members access to not just physical books but also the library district’s 33,000-title collection of audio books, a selection of sensory toys for young children and even their new WiFi2Go program.

“Whatever your interests or needs are, the library district has tools and services to help,” Cook said.

The process to sign up for a card is made as simple as possible. For those over the age of 18, all that is required is a photo ID and proof of residency. Minors between the ages of 4-17 are also able to get a card, though they need their parent or guardian’s permission as well as a photo ID for the adult and a form of identification for the minor.

“For those who aren’t ready to come inside, we do still offer outside services in the afternoons, including signing up patrons for library cards or renewing library cards,” Cook added.

For Missigman, signing up for a library card has eliminated some financial barriers and has given her the ability to fully engage with her courses at UF. Rather than spend her own money on materials for the class or compete with the other education students for the books that are available in the university’s education library, Missigman uses the county’s public libraries to easily access whatever books she needs.

“Since I’ve had [a library card] I’ve been getting more books for myself too,” Missigman said.

Though she has lived in the Gainesville area for a little over two years, this is the first semester that Missigman has taken advantage of the area’s library system.

“For me, the library is for class and pleasure,” Missigman said.

Library Card Sign-Up Month is being celebrated through a social media campaign that utilizes a variety of influencers and community leaders. Their diverse roster of advocates includes authors like Rochelle Alers and Lauren Groff, and even UF football coach Dan Mullen and former coach Steve Spurrier.

Aby Deal, a local body-positivity blogger, said she was excited when the Alachua Library District reached out in July with the opportunity to participate in the initiative.

“I’m really interested in supporting the community and using my platform to help,” Deal said.

As she has spent more time engaging with the community, Deal said that she has been impressed by the number of cool opportunities that the library provides, especially for younger children.

Library Card Sign-Up Month as well as the Publix gift card giveaway end on Thursday. Those interested in the program can head over to any of the Alachua County Library District’s 12 branches to sign up and enter.

Riana is a reporter for WUFT News who can be reached by calling 352-392-6397 or emailing news@wuft.org.
Previous Micanopy Residents Protest The Building Of A Dollar General Near A Native American Burial Mound
Next This App Could Help Prevent Sexual Assault Cases for College Students