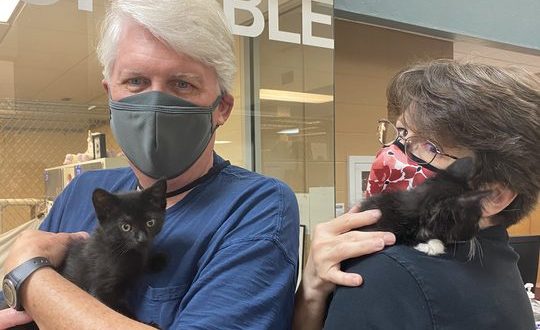 Jean Cibula and David Nessl hold their kittens for the first time after officially adopting them earlier this month. (Carissa Costello/WUFT News)

Kitten cries pierce through the shelter after the 2-month-old Calico cat named Fern is trapped behind a metal cage door, while her neighbor, the sleek, black, Everest gets held. Little furry paws stick out of the small gaps. It signals just the start of a busy kitten season.

Summertime has us at the height of “kitten season.” The Alachua County Animal Shelter is seeing a vast number of kittens spring up, and they are at capacity. As temperatures increase, so do the number of kittens born. The shelter is asking for the communities help to foster and adopt kittens.

“We lost our old cat last year,” Jean Cibula said, tears filling her eyes. “It took a while to get ready for another one, but our younger female cat Suzanne is 9 and needs a buddy.”

Cibula’s husband found two playful 9-week-old black kittens on Facebook. She fell for the “cute little fur balls” as they were chasing each other around the shelter’s front window.

“It’s kitten season, and all the shelters are full, so now’s a really great time to come in, adopt and take some of the pressure off the shelters,” she said.

Warmer months mean feline breeding season. Kitten season is when shelters experience the majority of their kitten and cat intake of the year. The shelter needs foster parents for young kittens to temporarily house and care for kittens until they are two months old.

Shelters have the most admissions during June, July and August. It’s the first week of June, and the Alachua County Animal Shelter is already filled, with 66 cats and 62 dogs, Grantman said.

In addition to the kittens, dogs need fosters because of increasing strays and owners during the summer.

Approaching the kennel, Zuko appears to come out of nowhere, bouncing up and down and barking. Unfortunately, the two-year-old American Stafford mix doesn’t show well in his kennel, she said. He came to the shelter as a stray back in September.

“But when you take him out, he’s huggable, lovable and really sweet,” said Jane Grantman, Alachua County Animal Shelter Supervisor.

Zuko arrived with a skin disorder, but now he’s happy, healthy and looking for someone that will commit to him and keep his skin looking good, Grantman said.

However, you can take a dog just for a week to get it out of its stressful environment.

With a hunched back and lowered head, an Australian Cattle dog named Fig nervously approaches the treat in Grantman’s extended hand. It has taken a long time to trust and interact with people, said Grantman.

Waldo, however, is no wallflower. The bulldog is goofy and fun-loving.

One can’t help but laugh as the 3-year-old American Stafford greets Grantman with a smile and his two front paws on the kennel fence. Joey waits for belly rubs and chest scratches. The sweet but quirky dog came to them in January as a shy, timid stray. Now, he does zoomies around the yard, she said.

“If you’re looking for someone to bring joy to your life, Joey’s the dog,” she said.

Adopting can give animals another chance at life.

Taking home a pet costs $20 for cats and $40 for dogs. The pets are spayed and neutered, dewormed and vaccinated. Adoption hours are 10:30-5 Tuesday through Saturday.

Carissa is a reporter for WUFT News who can be reached by calling 352-392-6397 or emailing news@wuft.org.
Previous ‘Excruciating:’ Florida Collapse Search Stretches To Day 6
Next Judge Upholds Florida’s Ban On Gun Sales To People Under 21