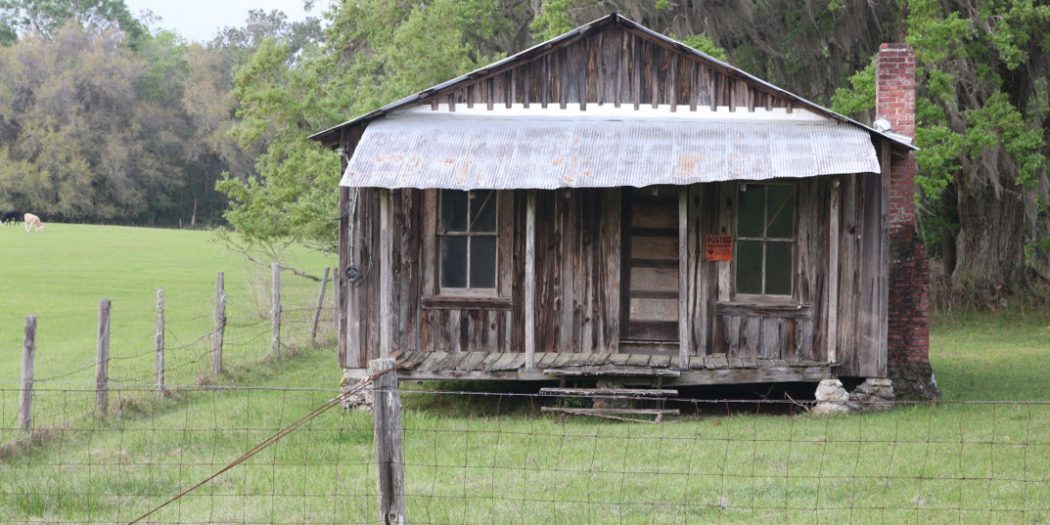 The tenant houses were built in the 1910s and 1930s and occupied primarily by African Americans. According to -relatives of D.R. Zetrouer, the structures were built to house people looking for work in the area if they had no other place to stay locally. These tenants helped work the farm. (Lawren Simmons/WUFT News)

This story is part of Untold Florida: Your Neighborhood, Your Story, a WUFT News series built from your questions. Tina from Micanopy said: I’m interested in the history of the sharecropper shacks on Hwy 320 in Micanopy.

On Northwest Hwy 320, in the middle of the small area of Shiloh, lie four houses that tell an important story of the area’s past.

In the 1840s, a young United States federal government was attempting to spread its influence and plant its flag on more land. In the midst of the Second Seminole War, the government was encouraging settlers to move to central and southern Florida.

The Armed Occupation Act declared 200,000 acres of land just south of Gainesville as open for settlement. The act offered 160 acres to any man who cultivated at least five of the acres with a well-kept home for five consecutive years. In return, the settlers had to provide armed service against the Native Americans if the government deemed it necessary.

A man from South Carolina by the name of Emanuel Geiger took this deal.

Geiger cultivated his land in the area that is now Shiloh, where he lived with his wife, Mary Geiger. Some of the land eventually ended up in the possession of one of his descendants, Dora Leitner Zetrouer, the granddaughter of Emanuel and Mary Geiger.

The land that Dora Zetrouer owned made up the eastern part of the property where the tenant houses are, and when she married a man named Daniel Remshart Zeutrouer from Wacahoota, the land was combined with the property he owned.

D.R. Zetrouer, like many people at the time, bought his property throughout the years as opportunities arose. This allowed Zetrouer to accumulate about 5,000 acres of land, according to Annabelle Leitner, the great-niece of D.R. and Dora Zetrouer.

The tenant houses were built in the 1910s and 1930s and occupied primarily by African Americans. According to -relatives of D.R. Zetrouer, the structures were built to house people looking for work in the area if they had no other place to stay locally. These tenants helped work the farm.

The houses were made from trees grown on the property, a tradition that has continued with relatives’ renovation of  the houses.

The occupants grew cabbage and collard greens just behind the houses. Today, the area where this food was grown is just forest.

Both Mattie Sue and H.B. were originally from Georgia and moved down to Florida. When H.B. moved, his family moved down with him and ended up living in the tenant houses next to him and Mattie Sue.

Griffin has fond memories of spending weekends visiting her grandparents and family at the tenant houses.

“We would go there every weekend,” Griffin said. “If we didn’t go to the houses on the weekends, something was wrong.”

“On Saturdays, my grandmother would cook breakfast: biscuits and syrup and bacon. She and my grandfather would drink coffee . . . On Saturday morning, we would get up and watch Road Runner, Foghorn and Tom and Jerry.”

Griffin would spend time on these visits playing in the yard with her brother on a big red pile of sand out back. When tired, she and her brother would go to the farm pump with “beautiful water.”

“It was like it was just from the refrigerator,” Griffin said.

“He would skin and gut the opossums and the kids would gather around and watch,” Griffin said. “He would place the opossum over the fire and singe its hair off. After, he would take his knife to the animal and get rid of the rest.”

H.B. Little used to work on the farm with the Zetrouers. He was a carpenter who did a bit of everything, according to Griffin, including helping to build up and maintain Mt. Pedro Baptist Church south of the tenant houses.

“He wasn’t a church person,” Griffin said. “He was more like the builder of the church.”

“Me and my grandfather were very close. He was an all-around person who loved his grandkids.”

Griffin holds similar sentiments for her grandmother Mattie Sue Little, who most people would refer to as “A Mattie Sue” or “A Matt.”

“Everyone loved my grandmother. She was the sweetest.”

“She wasn’t the best cook, but she would cook for everyone,” Griffin said, smiling.

Mattie Sue Little took various work around the community. One of the main jobs she did while working at the tenant houses was babysitting.

Griffin remembers the house and the area fondly.

“It was so peaceful and quiet,” she said. “My grandma would sleep with the front door open.”

The farm grew a variety of foods over the years like zucchini, squash and other similar truck crops. Zetrouer made it a point to be one of the first distributors to get his produce up north when the prices would be the best.

After Zetrouer’s passing in 1951, per his will, his two sons received life estates but not the land; the sons could use it but the grandchildren had the property rights, which Marjorie gained in middle school.

The farm stopped operating after Zetrouer’s passing in his 70s, but the tenants remained for some years following.

Mattie Sue Little and H.B. Little lived at the tenant houses until the mid-1960s or -‘70s when they moved four miles down the road to Flemington and built a new house with wood from the Zetrouer’s property. Griffin still lives there today.

At their new property, Mattie Sue Little and H.B. Little planted all sorts of fruit trees, many of which still exist on the property — oranges, pecans, dates and, yes, peaches.

Griffin’s grandparents continued living there until their deaths — H.B. Little’s in 1984 and Mattie Sue Little’s in 2004. Both are buried less than a mile south of the tenant house where they used to stay.

In tenant farming, tenants would typically rent a part of the property to grow whatever crops they desired, and when the crops sold, the tenant would pay rent from the profits. Alternatively, landowners sometimes retained a portion of the crops instead of receiving cash payment for rent.

Tenant farming quickly became a common practice throughout the South following the end of the Civil War and the freeing of enslaved African Americans. By 1930, there were 1,831,470 tenant farmers in the South.

But what began as a way to get former slaves working again became a harmful system that entrapped white as well as Black farmers. By 1935, nearly 77% of Black farmers and half of white farmers in the country were landless, working as tenant farmers.

It was a fairer arrangement than sharecropping – tenants retained a greater portion of the profit and typically had their own capital and tools to use rather than renting them from the landowner – but it was still a very difficult system in which to get ahead. Tenant farmers often became trapped in a cycle of debt and poverty.

What was at one point looked at as a possible path for upward mobility for white farmers, according to Georgia Encyclopedia, became a “dead end for whites and Blacks alike.”

But deals between landowners and tenants varied greatly, as with the Littles and Zetrouer. And the houses they occupied continue to stand as markers of a formative time in central Florida history.

Lawren is a reporter for WUFT News who can be reached by calling 352-392-6397 or emailing news@wuft.org.
Previous Explainer: What’s Going On With Tim Tebow And The Jaguars?
Next Hundreds Gather At Florida Ballpark To Honor Lives Of Boys Killed By Father

The city of Gainesville has partnered with Colliers International to create a potentially multi-year plan for the development of the Power District and other city sites.