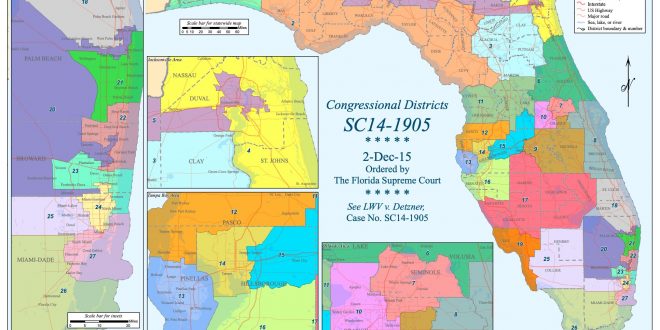 The United States Census Bureau is expected to deliver redistricting data by September. The map above shows Florida’s congressional districts. (Courtesy of the Florida Senate)

Here’s What The Release Of The 2020 Census Results Will Mean For Florida Redistricting, Federal Funding

As the country awaits the release of U.S. Census results later this month, anticipation among local experts is rising to see how those population shifts will impact redistricting and federal funding for infrastructure projects and city improvements.

Here’s a look at what to expect from each outgrowth of the new census.

Redistricting is the “redrawing of congressional and state legislative districts to adjust for uneven growth rates in different parts of the state,” according to flsenate.gov.

“Whenever a new census comes out, that means that we do redistricting so that all of the districts have equal population and people can be represented fairly in terms of their population,” said Dr. Michael P. McDonald, a political science professor at the University of Florida.

Redistricting occurs when congressional and state legislative districts are redrawn every 10 years to adjust and ensure equal population and representation.

Due to COVID-19 delays, the United States Census Bureau announced in February that its main obligation is to deliver the state population counts for apportionment to President Joe Biden. It has set a deadline for April 30, 2021. As a result, the census bureau is expected to deliver the redistricting data by Sept. 30, 2021, the website says.

In Florida, state law says all local redistricting must be done by December, according to McDonald.

That leaves a tight timeline near year’s end to do the actual redistricting work.

Although there is still some time for results to be released, the Fair Districts Coalition is already taking action and fighting to ensure fair districts and an end to gerrymandering by asking lawmakers to sign a pledge to comply with Florida Legislative District Boundaries, Amendment 5 and with Florida Congressional District Boundaries, Amendment 6, according to FloridaPolitics.com.

Although Florida adopted the fair districts amendments in 2010, there was still an attempt to gerrymander the Alachua County area, said McDonald.

Now, Florida’s 3rd Congressional District, for example, encapsulates the entirety of Alachua County and portions of adjoining ones.

“We have more compact districts now in Florida,” he said. “We have districts that are more politically fair.”

McDonald said when it comes to redistricting, there are many ways to measure fairness among different socioeconomic categories.

According to McDonald, there is “no protection for the African American community in the southeastern part of Gainesville during the redistricting.”

“It’s really just a political question as to whether or not the state council is going to draw districts that assist with representation of that community. I think they will,” he said.

Gov. Ron DeSantis has appointed two replacement members to Florida’s Supreme Court, giving it a majority of justices appointed by Republican governors. McDonald says it’s unclear whether the court will “enforce the constitution in the same way its predecessors did, which was majority Democratic.”

Another important factor when it comes to redistricting is the equal population requirement. This means that new districts could be created in fast growing areas, or that districts could collapse in areas that are not growing as fast or are losing population.

“Districts in the area of places like Orlando and other places in the country that are fast growing, will shrink. They’ll get smaller because they’ll have to shed population and because right now, they’re overpopulated,” McDonald said. “Up on the Panhandle (and) in the north central Florida area, those districts are going to have to increase in (geographic) size.”

According to Alachua County’s strategic initiatives manager, Sean McLendon, in 2010, a little over 25,000 students who lived in Gainesville most of the year did not participate in the census, resulting in a loss of almost $400 million in federal funds.

The confusion is due to students being unsure about stating if they lived in Gainesville or in their hometowns most of the time. According to the census bureau, college students should count themselves depending on where they sleep the majority of the year.

McLendon said the city has been affected due to a low response rate 10 years ago.

“We have missed out on a lot of potential funding for infrastructure projects and housing and other federal funds and state programs,” McLendon said. “It’s something that we are looking to correct this time around.”

McLendon said that these numbers matter because a lot of the COVID relief funding Alachua County is receiving is based upon population counts, so if the count isn’t accurate, the federal government had an inaccurate picture of how much assistance the community needs.

With less than a month away to find out the results of the 2020 census, city and county officials remain hopeful that the numbers will improve.

“I hope we have our highest census response rate we’ve ever had,” City Commissioner David Arreola said. “I hope that we see a market rise in the University of Florida students who filled it out in Gainesville and really in their own hearts and minds think of Gainesville as their home even if they’re not originally from here.”

“We’ve done better this past year, and we’ll do better 10 years from now as well,” McLendon said.

Victoria is a reporter for WUFT News who can be reached by calling 352-392-6397 or emailing news@wuft.org.
Previous Alachua County High Schools Now Offering COVID-19 Vaccines To Students 16 And Older
Next The Point, April 23, 2021: Inside The Florida Prison Program That Helps Inmates Train Dogs