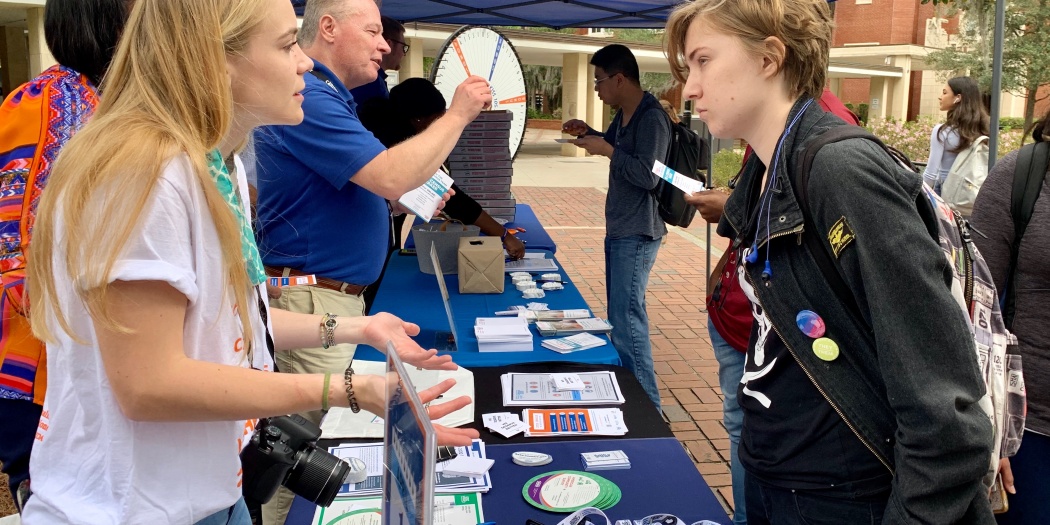 Sawyer Carlton, the UF Bateman team’s creative services coordinator and webmaster, left, informs UF freshman English student Alex Gonglewski, 18, that people should count themselves on the census where they live for at least six months out of the year. (Maya Punjwani/WUFT News)

Alex Gonglewski was confused about what to put in a critical space on the 2020 census form: Did she live in Gainesville or her hometown of Pinecrest in Miami-Dade County?

Gonglewski, 18, a freshman English student at the University of Florida, said she knew the basic premise that the census is conducted every 10 years and is crucial to funding federal programs.

“But I didn’t know I had to fill it out for Gainesville even though I’m not from here,” she said.

Alachua County lost hundreds of millions of dollars of federal funding because too few UF students stated during the 2010 census counting that they lived in Gainesville, officials said. That money could have funded housing, roads, education and health care in the county.

This time around, the county has teamed with UF to get as many of its more than 52,000 students to participate in the census – and to get them to note they spent most of the year in Gainesville.

Yes, the coronavirus outbreak has caused UF and universities nationwide to shift to online classes – and for students to return to their homes for the rest of the spring semester. But, according to a statement from the U.S. Census Bureau, students should still count themselves where they “live and sleep” for most of the year, even despite the global pandemic.

“The COVID-19 virus has been challenging, but if students would comply to these methods, we should get an accurate count for this community,” Armon Lowery, a North Florida partnership specialist with the census bureau, wrote in an email to WUFT News on Monday.

Alachua County lost about $390 million in federal funding in the past decade because of the 2010 census undercount, said Sean McLendon, strategic initiatives manager for Alachua County.

McLendon said UF-related tracts were the worst performing in the county in 2010. Historically, he said, students and minorities have low census response rates.

“We have the challenge of having a big university where not everyone understands that they need to be counted where they reside for at least six months out of the year,” he said.

2020 marks the first time the census can be filled out online, a milestone which has census officials hoping for more student participation. Recently, the census bureau sent every household in the U.S. received a postcard in the mail with a unique code. Someone from each household can use the code to fill out the survey questions online “quickly and easily,” Lowery said.

April 1 is Census Day – and the bureau wants everyone by then to share names, sex, ages, dates of birth, race, ethnicity and a few more details about the household itself, he said.

As of March 18, more than 11 million households had responded to the census, according to an announcement that day by Census Bureau Director Steven Dillingham.

That same day, 2020 census field operations were suspended until at least April 1 because of coronavirus concerns, Dillingham said. That’s to protect the public, bureau employees and “everyone going through the hiring process for temporary census taker positions,” he said.

People who do not answer the census online will receive a reminder via mail in April. In late May, Dillingham said, census takers will begin visiting households that had not yet responded.

Alachua County still needs to hire more than 3,000 people as census takers, Lowery said. They will earn $16.50 per hour and .58 cents per mile driven. Field officers will be paid $18 per hour.

“It offers an opportunity to make money, gives a flexible schedule and it’s a great learning opportunity for people to learn about the census,” Lowery said.

Grace Makley, 22, a sustainability and sociology student at UF from Boca Raton, said she saw a job posting online to be a census taker and was interested in applying because of the high pay.

“I have some experience canvassing, and I love walking around and talking to people,” Makley said. “This job can help me get my steps in for the day.”

Lowery said about 24,000 UF students were not counted in 2010. He said students might not have responded because they thought their parents had to fill it out for them in their hometown.

The county hopes that better education and outreach will stop this from happening again.

States, counties and universities are forming Complete Count Committees to make sure that certain demographics and communities will take part in the census.

Alachua County’s census committee contacted student leaders at UF to spread its message on campus, Lowery said. That included groups like the NAACP student chapter as well as sororities and fraternities, he said.

UF public relations students are also working on creative ways to increase census participation as part of the national Bateman Case Study Competition, with their “We Deserve Better” campaign.

“What do you think Gainesville deserves better?” Erin France, the Bateman team’s student outreach coordinator, asked at a census promotion event at the Plaza of the Americas on campus. Affordable housing, mental health resources and emergency services, among other things, they replied.

France, 21, of Panama City, urged them to fill out the census, explaining that the data affects funds the county receives for the programs they care about.

“People might have heard about the census in their high school civics class, but since it comes up every 10 years, it might not always be on their radar,” France said.

France said the Bateman team also spoke to students at Santa Fe College about the census at one of their senate meetings and at their Social Justice Festival in February.

UF President Kent Fuchs spoke at the event about the importance of student participation.

“Historically, universities really underperform in terms of their communities participating in the census,” Fuchs said. “We want to be the opposite. We want the university to outperform the entire county.”

Before COVID-19 caused UF to send its students home for the semester, the university had planned to distribute messages about the census campus-wide, including pamphlets, messages on electronic billboards and across its social media.

“Getting an accurate census count will lure the best and brightest students and staff” as well as help to improve living conditions in Gainesville and help advance UF to a top-five national ranking, said Andrew Ragsdale of the university’s government and community relations office.

The county’s census committee is also focused on getting people in “hard-to-count” areas to participate. In addition to students, Lowery said, this includes people in East Gainesville, especially African Americans and Hispanics who have “shown apathy about the census.”

Lowery said this could be because of the citizenship question on the census that the Trump administration proposed last year before that effort was blocked by the Supreme Court.

“There’s concern that people will be asked about their citizenship or immigration status, but that is explicitly not being asked on the census,” Lowery said.

Gabriela Pombo, 20, director of political affairs for UF’s Hispanic Student Association, invited bureau employees to explain the impact of the census to the student group in November.

“Not many people know much about the census, but the citizenship question is the one thing they know because they’ve heard about it on the news,” said Pombo, a third-year political science student from Miami.

She was happy to see friends who are not politically active stay afterward to ask more questions.

Hispanic Latinx students are typically more engaged with political activity from their home country, but “for those of us who live here, there is a tendency to not be as active,” Pombo said.

Funding borne of the census is, of course, helpful in rural areas like Marion County.

County Commissioner Michelle Stone has taken the lead there to ensure active census engagement in that community. She said the county’s census committee has subcommittees for matters such as education, business, faith, media, health care and veterans.

“People need to understand that the money that will flow into this community is based on the numbers, not the need,” Stone said.

Stone said a mistrust in government could be a reason for underreported communities.

“If you get a postcard in the mail saying I want all this information from you, I think all of us in this day and age are a little concerned about who really is asking for this information,” she said.

Stone said census mailing materials will include phone numbers that people can call to receive assistance in 12 languages. There are also guides available online in more than 50 languages.

The census also determines each state’s representation in Congress, and Florida is projected to gain two congressional seats from the 2020 counting. Which is why, said McLendon, the Alachua County director, “Let’s get everyone counted once and in the right place.”